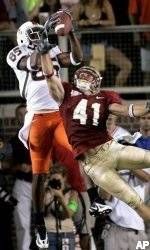 And with the history of the series and the way the Seminoles were playing offense, it was hard not to like the Miami’s chances in overtime.

But Florida State finally caught a break against Miami.

After six straight years of frustrating finishes, the Seminoles found some good fortune against their rivals when the Hurricanes botched that potential tying kick to give Florida State a 10-7 victory Monday night.

“We finally stole one from them like they’ve been stealing them from us,” Florida State coach Bobby Bowden said. “It’s about time.”

In a series that has seen countless missed field goals by Florida State decide games, Miami missed two and couldn’t even get off the biggest one of the game.

Jon Peattie lined up for the 28-yarder with about 2:30 left, but holder Brian Monroe dropped a low snap that bounced off his hands and rolled back into the pile, never giving Peattie a chance to try the kick.

“It was like, ‘Did that really just happen. That’s supposed to happen to us,”‘ Florida State running back Lorenzo Booker said, laughing at the irony.

With No. 9 Miami out of timeouts, No. 14 Florida State simply needed to run out the clock to secure its first victory over the Hurricanes since 1999 and maybe take some of the sting out of all those wide rights and lefts, some that might have cost Florida State national titles.

“It made up for a lot of them but not all of them,” said Bowden, who improved to 12-19 against Miami with FSU.

Florida State overcame its own inept offense (170 total yards) with a defense that registered nine sacks by seven players and some solid special teams plays.

Both Florida State’s Drew Weatherford and Miami’s Kyle Wright were making their first collegiate starts at quarterback and, at times, neither looked ready to lead a team to victory in one of college football’s fiercest rivalries.

Weatherford was awful, going 7-for-24 for 67 yards with an interception. He was pulled early in the fourth, but fellow redshirt freshman Xavier Lee had no luck moving the ‘Noles, either.

“The only thing I didn’t like was that our freshman quarterbacks couldn’t hit a receiver,” Bowden said.

Wright wasn’t much better until the final Miami drive, when he completed six passes and converted three third downs to put the Hurricanes in position to beat the Noles’ for the seventh straight time.

Wright hooked up with tight end Greg Olsen four times in the 19-play drive that started on the Miami 3 and got the Hurricanes to the Florida State 3. But the Seminoles’ ninth sack pushed Miami back and forced the Hurricanes to settle for the field goal attempt.

Wright finished 16-for-28 for 232 yards and a touchdown pass. Olsen caught eight passes for 137 yards.

“I don’t mean to say anything bad about Florida State,” Wright said. “But I don’t think the better team won.”

So, it came down to the defenses and special teams, and even when those units set up their offenses with prime field position, it was no sure thing they’d capitalize. The Seminoles wasted a first-and-goal from the 1 in the third quarter.

“The defense kept giving us opportunities to win the game,” Miami coach Larry Coker said. “We just couldn’t get it done.”

Most of the talk leading up to the 50th meeting of Miami and Florida State was about the two first-time starters at quarterback. And when it took almost 9 minutes for either team to complete a pass, it became apparent the offenses were in for a long night against two fast and furious defenses.

Wright worked through his problems, including two early interceptions and a few dropped passes, long enough to guide an 81-yard touchdown drive in the second quarter. The sophomore’s first career TD pass was a 34-yarder, zipped over a defender to Ryan Moore to make it 10-7.

The Seminoles had the lead at the half, but the signs weren’t good for Florida State.

Weatherford had completed just three passes for 14 yards while Wright seemed to be capable of making plays when he got help from his line and receivers.

“I mean we did enough to win and that’s all that matters,” Weatherford said.

It looked even more ominous for Florida State when Lawrence Timmons blocked a Miami punt that left the Seminoles with first-and-goal at the 1. After three runs lost 3 yards and a false start pushed FSU back another 5, first-year starter Gary Cismesia hooked a 23-yard field goal left.

The Seminoles grabbed a 10-0 lead in the first quarter, with help from the first interception thrown by Wright.

The pick set up Florida State at the Miami 29 and moments later James Coleman bulled in from the 1 for a 7-0 lead and the Seminoles’ first first-quarter TD against the ‘Canes since FSU’s last win six years ago.

Cismesia made the first field-goal attempt of his career from 37 yards out a few minutes later, much to the delight of the Seminoles’ fans.

Meanwhile, Peattie, a veteran who made 15 of 24 field-goal attempts last season, missed badly from 47 and 39 in the quarter.

“When the law of averages goes against us, I don’t like the law,” Coker said. “I think it was just poor execution on our parts. Maybe it was just Florida State’s time.”