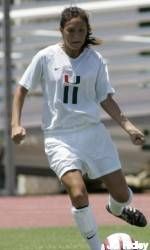 UM to Host Nation's Elite at the 2005 Miami Tournament

CORAL GABLES, Fla. – The University of Miami women’s soccer team will play host to in-state rival Florida Atlantic Friday afternoon at 4:30 p.m. at Cobb Stadium in the opening game of the 2005 Miami Tournament which will also feature perennial powers, No. 3 UCLA and No. 14 Princeton.

The Hurricanes (1-1) head into the two-day tournament coming off a disappointing 2-1 loss to Stetson Wednesday evening. UM’s lone goal of the game came from freshman forward Val Blanco, who also leads Miami with seven shots, including five on goal.

Blanco is joined by impressive crew of newcomers on the UM roster including redshirt sophomore forward Rebecca Tweneboah and freshman midfielder Meghan McKinsey. Tweneboah, a Notre Dame transfer, and McKinsey are tied for the UM lead with four points on the year with each recording a pair of assist and a goal in two games.

Miami has yet to allow a goal in the first half of play behind sophomore keeper Lauren McAdam, who recorded a shutout in the 4-0 win over Monmouth last Sunday in the season-opener, and junior net-minder Alex Alford along with the UM back line of senior Ashley Durkee, sophomore Akilah Moore, junior Kristen Chapman and freshman Nikki Stecich.

Florida Atlantic (2-0) heads from Boca Raton to Coral Gables Friday on the heels of a pair of shutout victories to open the season.

The Owls are led by sophomore midfielder, Susanna Lehiten, who was named to the SoccerBuzz Magazine National Elite Team of the Week as well as being named the A-Sun Offensive Player of the Week after scoring three goals in FAU’s two wins. Lehiten’s three goals on the season surpasses her mark from last season which helped earn her 2004 A-Sun Freshman of the Year honors.

Behind the impressive play of Lehiten, FAU’s has out-shot opponents by a total of 28-to-8 this season and have allowed just five shots on goal.

The Hurricanes and Owls have met every year since the inception of the UM soccer program in 1998. Miami holds a 4-3 advantage in the all-time series, but FAU has taken each of the last three meetings – all of which have been decided by just one goal including last year’s two-overtime 1-0 decision in Boca Raton.

The Bruins, whose roster boasts a pair of M.A.C Hermann Trophy National Player of the Year candidates in senior defender Jill Oakes and senior forward Iris Mora, opened the season with wins over Long Beach State and No. 25 San Diego last weekend.UCLA will be without leading scorer freshmen forward Kara Lang this weekend who will be competing with the Canadian Women’s National Team in a pair of matches over the weekend. Lang, the only freshman in the country to be named to Soccer America’s Preseason All-America team, scored three goals in the Bruin’s victory over San Diego to pace UCLA.

Led by the 2004 NSCAA and SoccerBuzz Coach of the Year, Julie Shackford, Princeton will see it’s first action of the season Friday night against UCLA, opening the season with the last opponent they faced in the 2004.

Like UCLA, the Tigers will be without their leading threat – All-American sophomore midfielder Diana Matheson, who joins fellow countryman Lang with Canadian National Team.

Princeton will have their returning leading scorer from a year ago, senior forward Emily Behncke, who would have tied the 23-year school record for goals in a season last year with 13 had it not been for departing senior Esmeralda Negron’s record-setting 20 goals.

The Hurricanes will return Sunday to take on Princeton at 2:30 p.m. followed the final game of the Miami Tournament, UCLA versus Florida Atlantic at 6 p.m.

Admission for each day is just $5 dollars for adults and $3 dollars for children and senior citizens. For more ticket information please call the Hurricane Ticket Office at 1-800-GO-CANES or visit the Official Website of Hurricane Athletics, www.hurricanesports.com.