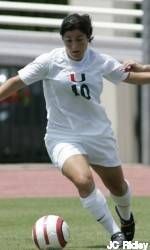 CORAL GABLES, Fla. – The University of Miami women’s soccer team out-shot Stetson by a total of 19-to-8, but could not hold off a pair of second half goals to fall to the Hatters, 2-1, Wednesday night at Cobb Stadium.

After tying the score at one-all in the second half, the Hatters’ (3-0) Alicia Briggs scored from nearly 35 yards out over the top of UM keeper Alex Alford in the 85th minute to hand the Hurricanes (1-1) their first loss of the 2005 season.

The Hurricanes pressed the entire match recording a total of 19 shots led by Val Blanco and Akilah Moore, who each recorded three shots with a pair on goal, while the UM backfield held Stetson to just eight shots on the day.

Miami opened the game on the attack, taking five shots on Stetson keeper April Eilering in the game’s first 23 minutes. The Hurricanes broke onto the scoreboard in the 40th minute when Blanco fielded a pass in the box from teammate Meghan McKinsey and turned to score over the top of Eilering in the short right post.

Heading into the second half with a 1-0 lead, UM once again opened on the offensive, out-shooting Stetson 7-to-0 in the half’s first 17 minutes, but the Hatters’ first shot of the second half proved to be an impressive one when Andrea Rice knocked down a ball and scored on the far left post past Alford in the 64th minute.

The Hatters sealed the win a little over 20 minutes later when Briggs fired off a shot from nearly 35 yards out, scoring over Alford for the eventual game-winner in the 85th minute.

The Hurricanes will return to action Friday, hosting in-state rival Florida Atlantic at 4:30 p.m. in the opening game of the Hurricane Invitational.