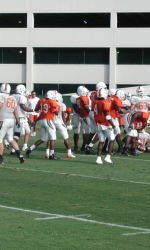 CORAL GABLES, Fla. – The University of Miami football team did not hold back in either of its two practices on Thursday at the Greentree Practice Fields. Instead of pacing themselves over the course of their first double session on the practice schedule, Hurricanes players and coaches upped their intensity in both workouts.

Clouds shielded the morning sun for the first hour of the morning practice before giving way to the South Florida sun. The coaches and players battled through the heat in the afternoon, a crucial factor in developing mental toughness, said head coach Larry Coker. “You either develop mental toughness or you fold,” Coker said. “I’ll guarantee that they’re developing it in Tallahassee. We better develop it here.”

Position and one-on-one sessions in the morning were marked by a noticeable increase in vocal direction from assistant coaches and were matched by the tenacity of responding Hurricanes players.

The offensive line and defensive front seven played with nastier dispositions during one-on-one, short yardage and team drills, with minor scraps breaking out.

“(Practice) was a little spirited today,” Coker said after the morning session. “It gets hot and tempers flare a little bit. We have to learn how to practice, protect ourselves and protect each other. We have an opportunity to have a good football team, but we have to practice well and keep our players on the field.”

Every position grouping seemed to enjoy moments of success throughout the morning session. Leading the way was the defensive line, which maintained a constant presence in the backfield during team drills. “(The defensive line has) had a lot of good days and I think they’ll have a lot of good days throughout the year,” Coker said. “I think they are a talented group and they have speed and experience. I see them putting a lot of pressure on the quarterbacks. Plus, we have depth there.”

Miami’s quarterbacks and receivers answered stingy play by the secondary with long plays of their own and the offensive backfield popped pads with the linebackers frequently in short-yardage situations. Coker echoed his sentiments from Wednesday regarding his pleasure with route-running by receivers. He also praised the play of his top two quarterbacks. “Kyle (Wright) and Kirby (Freeman) were really throwing the ball well,” Coker said. “I’m excited at what I’ve seen from them. They both have outstanding and they get rid of the ball quickly.”

The Hurricanes shed some equipment during the two-hour afternoon workout, practicing in shoulder pads and shorts. Despite limited contact, the defense remained just as intense and emphatic as it was in the morning practice. “The defense flew around today,” Coker said. “The offense might be a little hot and tired, but we have to push through. We have to be a lot more efficient on offense. It was good to see the way the defense bounced back and flew around and made some good things happen.”

Notes: Coker addressed the play of offensive lineman Andrew Bain after the afternoon practice. “I’ve been real pleased with the way he’s made progress. He’s done a nice job and really stepped it up. He’s really going to work for playing time.”