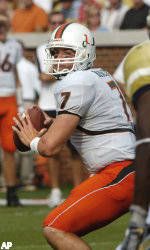 ATLANTA – A potential quarterback controversy in Miami was silenced before it could gain momentum, but another strong showing by the Hurricanes’ defense may help force a quarterback change at Georgia Tech.

“That was probably our most complete game that we’ve had,” said Miami coach Larry Coker. “I’m very encouraged. I really liked what I saw.”

Miami forced four turnovers and has allowed only one offensive touchdown this season.

Coker said he wanted to give freshman backup quarterback Kyle Wright some playing time, but was encouraged by Berlin’s passing.

“I think he was a lot more aggressive,” Coker said. “He put a lot of extra practice time in with what he was doing. And guys came up with plays for him.”

Coker said Berlin “was playing awfully well before we pulled him,” but the coach stuck with his plan to put Wright in the game on Miami’s third possession.

Frank Gore rushed for 115 yards and, like Berlin, was held out in the fourth quarter when Miami (4-0, 2-0 ACC) had the game under control.

Miami led 10-3 when Coker put Wright in the game. The Hurricanes were held without a first down in his two possessions. Berlin came back to lead Miami to a field goal and touchdown for a 20-3 halftime lead.

“That was the coach’s decision, and I was behind his decision all the way,” Berlin said. “I wasn’t upset in the least.”

There had been calls for Miami to make a change at quarterback after Berlin threw only two touchdown passes in his first three games.

Berlin completed 10 of 20 passes for 200 yards with no interceptions against Tech. Two of his three scoring passes were to Roscoe Parrish.

Wright returned to play the fourth quarter and completed 4 of 6 passes for 24 yards.

Tech’s Reggie Ball threw three interceptions for the second straight week and the Yellow Jackets were hurt by the loss of ACC rushing leader P.J. Daniels, who was held out with a strained quadriceps.

Ball has eight interceptions for the season.

“I have not played well the last two weeks,” Ball said. “If coach thinks that he needs to make a change, I’m all for it.”

For one play, Tech appeared capable of moving the ball without Daniels. Woods broke free for a 56-yard run on the first play from scrimmage to the Miami 11, but the Yellow Jackets had to settle for a 24-yard field goal by Travis Bell.

But it was obvious Tech missed Daniels. In one second-quarter series, Ball and Damaruis Bilbo took turns running the ball on four straight quarterback keepers. The drive ended with Ball’s second interception. Brandon Meriweather picked off a pass intended for Levon Thomas.

After Meriweather’s interception, Berlin passed to Lance Leggett over the middle for a 57-yard touchdown pass and a 20-3 lead.