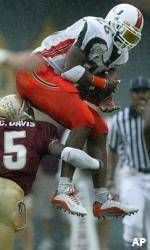 “Having a record six players chosen in the first round of the NFL Draft is an unbelievable honor for the University of Miamifootball program,” Miami Head Coach Larry Coker said. “The fact that we have had 19 first round selections in the past four years is a reflection of how hard the student-athletes have worked to improve and the guidance provided by the coaching staff.”

Carey’s selection by the hometown Dolphins marked the first time Miami’s NFL franchise had selected a Hurricane since picking Yatil Green with the 15th overall selection in 1997.

Miami Is Number One In The First Round
Since 1984, Miami has produced more NFL first-round draft picks than any other college. In 2004, UM had a record six players (Sean Taylor, Kellen Winslow II, Jonathan Vilma, D.J. Williams, Vernon Carey and Vince Wilfork) drafted in the first round. Miami had four first round pickes in 2003, five in 2002, four in 2001, and three first-round picks in 1987 and 1991. In 1991, UM defensive lineman Russell Maryland was the No. 1 overall pick. In 1987, UM quarterback Vinny Testaverde was the No. 1 pick in the draft. The following chart illustrates the top 10 colleges that have turned out the most first-round draft picks since 1984.