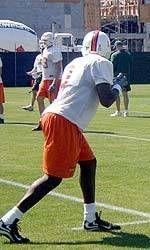 CORAL GABLES, Fla. (hurricanesports.com) – The University of Miami football team went through a two-hour practice in shorts and shoulder pads on Thursday afternoon at the Greentree Practice Fields.

The Hurricanes continued preparing for the season opener against Louisiana Tech and are developing a practice routine for the upcoming season.

“This is what we call a normal Thursday practice for us,” Head Coach Larry Coker said. “We worked a lot on some redzone and third down situations. We can sense the intensity of the practice starting to pick up and that is good because a week from tonight is our first game.”

“We have Kevin Beard and Devin Hester,” Coach Coker said. “We hope to get Roscoe Parrish back. We will see how he fits in the mix. Ryan Moore has especially been good and those are the guys we will go with. Sinorice Moss was back at practice today and that is encouraging.”

Senior wide receiver Kevin Beard has stepped up as the leader of the group and has impressed Coach Coker.

“Kevin has been a leader for us,” Coach Coker said. “He has done exceptionally well in helping get the younger players lined up properly, pushing them, and communicating with them. He has also become more of a playmaker than I’ve ever seen him be. I have been impressed by not only his leadership and skills, but also his ability to make plays.”

The Hurricanes will hold a practice at Florida International University on Friday evening. The practice will be closed to both the media and public.

For UM football ticket information, please call 1-800-GO-CANES. The Hurricanes are set to open the season on Aug. 28 against Louisiana Tech in Shreveport. La. UM then returns home to face the Florida Gators on Sept. 6.