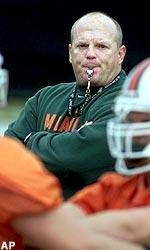 It’s called the sand pit. But it’s not a place to build castles, and there’sno water in sight.

This is Kehoe’s workshop – where tired, sweaty football players are punishedfor slacking off in the classroom or on the field.

After a two-hour practice, they run through deep, soft white sand in helmetsand full pads. They stop with each whistle, drop face first into the pit andthen jump up and start running again. Forward, backward, sideways. Sometimes afew minutes, sometimes much longer.

Whether he’s in a meeting room or on the football field, Kehoe never askshis players to do something he can’t do or hasn’t already done. He played twoyears at Miami (1979-80) and has spent the last 22 coaching the Hurricanes.

Kehoe knows what it takes to win, and he has five national championshiprings to prove it.

“It’s a lot of hard work, it’s a physical game and it’s definitelydemanding, but if you’re going to do all that (stuff), you better win,period,” Kehoe said. “If we’re going to go through all the trouble to laydown a plan every week and do all this work, then let’s win games.

The top-ranked Hurricanes (6-0) are off Saturday, and when they reflect ontheir 28-game winning streak, they point to coaching as being the biggestreason they haven’t lost in more than two years.

And Kehoe is the cornerstone of coaching at Miami.

The 45-year-old, stocky, baldheaded, fun-loving, laid-back coach started asa student assistant in 1981, became a graduate assistant the following year andthen started working with the offensive line in 1985. He’s been there eversince, except for a 13-day stint as interim head coach in January 1995.

“I was undefeated, untied and unscored upon,” he says. “I was calling theshots in a way, but there wasn’t anything to call. We were just buying time,trying to hold the recruiting class together until Butch Davis got here. Wewere like a horse without a head.”

He has helped make first-year starting tackles Carlos Joseph and VernonCarey look like wily veterans. The Hurricanes are averaging more than 209 yardson the ground, and the line has allowed five sacks in six games.

Kehoe enjoys the success, and it trickles down to his players. He jokes withthem before, during and after practice and saves some of his best lines for themeeting rooms. He pokes fun at them constantly, on topics ranging fromrelationships to body fat.

“He makes up words, too,” center Joel Rodriguez said. “He must have apocket dictionary or a word-a-day calendar because he comes up with at leastone strange, new word every day. He’s just trying to impress us, but we knowbetter. He’s not that smart.”

They even tried to prove it once.

Kehoe had spent months, and in some cases years, telling his linemen abouthow tough and relentless he was as a guard on the 1979 and 1980 Miami teams. Soone day, a few of the players sneaked into his office, found a reel-to-reelfilm of the 1980 season, set it up and started rolling it when Kehoe walkedinto the meeting room.

The players immediately began to dissect Kehoe’s footwork and blockingtechnique. They got an even bigger laugh from Kehoe’s appearance, which wouldbe considered way undersized these days.

Now every time the players want to have some fun, they draw an offensiveline on the board – using a square for the center and four circles for theguards and tackles. They make all the circles big except for the left guard,which they sketch tiny. Then they put a No. 59 above it along with the phrase,”Guess who?”

“There’s no one quite like him in the country, at least not anyone I’vemet,” guard Chris Myers said. “He gives us lots of leeway to joke around andcarry on and have fun, but when it’s time to get serious, you know it.”

Kehoe is always serious when he talks about winning.

He was on hand for each of the program’s national titles: 1983, 1985, 1987,1991, 2001. The first one and the most recent one will always be his fondest.The first because it was like nothing he had ever felt before, and the lastbecause he felt the players were a special group.

After all that success, it’s a little strange that he is still at Miami. Butnot once has he been offered a job elsewhere, he says. But that’s fine now,especially while the team is winning.

“It’s such a great program,” he said. “I don’t know why I’m here, but Ifeel lucky that I am. I get to coach the way I want to coach. That makes it somuch easier. It allows me to develop my relationship with my kids.

“They know that sometimes we’re going to laugh and have a good time andsometimes it’s going to be a pain in the butt.”

Like when they have to go to the sand pit.

“I never want to go there because you see those guys come back with sandall over their bodies and they’re spitting sand out of their mouths,” Myerssaid. “It’s not a good deal.”