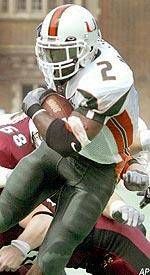 But the Hurricanes aren’t satisfied.

“When we had an opportunity to put the hammer down, we didn’t,” Dorsey said. “You want to put a team away when you can.”

Tanardo Sharps had two rushing TDs for Temple (1-2). The Owls have lost their last two games by a combined total of 55 points, but are encouraged by the performance against Miami.

“We knew all week we could play with them,” defensive tackle Dan Klecko said.

McGahee, a sophomore tailback who replaced Clinton Portis, ran for 134 yards a week after a 204-yard performance at Florida. His four TDs tied the mark set by Melvin Bratton and Alonzo Highsmith in 1984. Bratton did it against Boston College and Highsmith against Notre Dame.

“I didn’t know I had four,” McGahee said. “I just put my head down and try to make plays.”

Dorsey finished 20-of-35 for 314 yards and no interceptions. He was picked off three times by the Gators.

After turnovers allowed Temple to get within 21-14 in the second quarter, the Hurricanes scored the next 23 points.

Sharps fumbled the first play of the third quarter, giving Miami the ball at Temple’s 24. McGahee went in from the 1 five plays later for a 31-14 lead.

The Hurricanes put the game away with a 70-yard drive late in the third quarter. Dorsey completed passes of 17 yards to Quadtrine Hill and 32 yards to Kevin Beard before McGahee scored on a 4-yard TD run for a 37-14 lead.

Dorsey connected with Kellen Winslow on a 3-yard TD pass to make it 44-17 early in the fourth, one play after completing a 53-yard catch-and-run pass to Ethenic Sands.

“We didn’t have a letdown, but we lost a little of a mental edge,” Miami coach Larry Coker said.

Miami started the game where it left off against Florida, scoring touchdowns on three of its first four possessions to take a 21-0 lead.

McGahee’s 1-yard TD run made it 7-0, completing a five-play, 67-yard drive that was aided by a personal foul penalty on Temple’s Terrance Leftwich.

Lawrence Wade fumbled the ensuing kickoff, and the Hurricanes took over at Temple’s 10. Dorsey hit Beard on a 9-yard TD pass three plays later for a 14-0 lead.

A 6-yard TD run by McGahee gave Miami a 21-0 lead early in the second quarter. The 80-yard drive was the longest of the afternoon for the Hurricanes.

But then Miami got careless.

Dorsey slipped and fell as he dropped back on a third-and-6, forcing the Hurricanes to punt for the first time. Punter Freddie Capshaw couldn’t handle a low snap and fumbled after attempting to get the kick off, giving Temple the ball at Miami’s 21.

Sharps scored from the 1 seven plays later to make it 21-7. The Owls converted a fourth-and-2 from the 3 on a 2-yard shuffle pass from Mike McGann to Makonne Fenton, setting up Sharps’ run.

McGahee fumbled on Miami’s next possession, and Temple took over at the 16. On the first play, Sharps burst up the middle, broke a tackle and ran in for a score, cutting the deficit to 21-14.

It was the closest the Owls would get.

A 22-yard TD pass from Mike Frost to Sean Szarka provided the final margin long after Miami had removed its starters.

“We played a tremendous team,” Temple coach Bobby Wallace said. “I’m proud of our players when we fell behind 21-0. Our offense played as well as they can. That was our smartest game plan to move the ball against them.”

Despite losing 11 players to the NFL draft, including its leading rusher and the entire secondary, Miami could be on its way to another perfect season in its bid to become the first repeat national champion since Nebraska in 1994-95.

But the Hurricanes have a difficult schedule, including games against No. 4 Tennessee, No. 5 Florida State and No. 11 Virginia Tech.