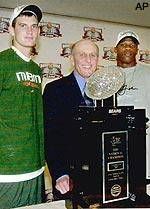 Get your Football Gear Here

The defending national champion University of Miami football team is ranked first by the Associated Press in the service’s preseason football poll of media members for the 2002 season, marking the first time since 1992 that Miami has entered the season as the nation’s top-ranked team. Miami had 27 first-place votes and 1,746 points to Oklahoma’s 21 first-place votes and 1,732 points.

Miami, which started its run to the 2001 national title ranked second by AP in the preseason, enters the 2002 season on a 22-game winning streak after a 12-0 season in which the Hurricanes outscored opponents 512-117 and defeated Nebraska in the Rose Bowl, 37-14. The Hurricanes return 12 starters from last year’s squad and face a difficult schedule that features No. 6 Florida in Gainesville on September 7 (5 p.m. ET, CBS-TV), hosts No. 3 Florida State on October 12 in the Orange Bowl (12 p.m. ET, ABC-TV), and No. 5 Tennessee in Knoxville on November 9 (time to be announced).

“Being voted number one is always a great honor,” said head coach Larry Coker. “Having the media recognize our program and our returning players as the preseason number one team not only acknowledges our potential but also gives us another reason to try and repeat as national champions.”

Miami, which has won five national championships but has never won titles in successive seasons, last began the season ranked ranked No. 1 in 1992 and eventually played Alabama for the national championship in the Sugar Bowl. The Hurricanes will begin the season ranked among the top 10 for the seventh time in 12 seasons, and UM begins among the top five for the sixth time since 1991. Twice before, Miami was No. 1 in the preseason poll – in 1990 and 1992.

The first regular-season AP poll will be released on Monday, Aug. 26.

The Hurricanes begin the 2002 season Saturday, August 31, against Florida A&M at the Orange Bowl. Kickoff is set for 7 p.m.

For ticket information Hurricane football, contact the UM Ticket Office at (305) 284-2263 or 1-800-GO-CANES. Tickets may also be ordered online at www.hurricanesports.com.