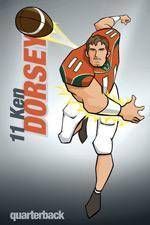 Get your Football Gear Here

Coral Gables, FLA – (REPLACE_ME) – They’re back. They’re pumped. And they’re ready to take the nation by storm. They’re the 2001 National Champion Miami Hurricanes and this season, their arsenal includes a new super-powered advertising campaign designed to unleash the Hurricanes’ message of NCAA dominance onto an unsuspecting public throughout the greater Miami area.

The campaign– which includes television, radio and print–features head coach Larry Coker and several Hurricanes players as stars of their own superhero adventures. The television commercial uses state-of-the-art animation and filmed sequences to suggest that perhaps they owe their incredible athletic talents to, among other things, secret government missions gone terribly awry or exposure to radiation during interstellar travel.

Created by MARC USA’s Miami office, the campaign’s goals are to promote local pride in the team, generate excitement for the 2002 season and spark ticket sales for a much-anticipated season that includes home games against archrivals Florida State and Virginia Tech.

“National championships don’t come along everyday, and we wanted to remind Miami in a big way of the action-packed season we had last year and the excitement that’s in store for them this season,” explains Coach Coker. “And this campaign definitely does that.”

On July 23, fans can log on to REPLACE_ME and get a sneak peek at the new television commercials featuring Coker and Dorsey that will hit the airwaves on August 5. The new spots will also be shown at both CanesFest Broward on August 3 and at the CanesFest Palm Beach on August 4. CanesFest Broward will be held at the Broward County Convention Center from 3 p.m. to 7 p.m. CanesFest Palm Beach will be held at the South Florida Fairgrounds from 1 p.m. to 5 p.m. Admission to both events is free.

For 2002 football tickets, contact the UM Athletic Department at 1-800-GO-CANES.