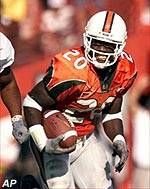 OWINGS MILLS, Md. (AP) – Their experience with Ray Lewis convinced the Baltimore Ravens that you can’t go wrong by picking a defensive player from Miami late in the first round of the NFL draft.

The Ravens fortified their depleted secondary Saturday by selecting safety Ed Reed with the 24th overall pick. Reed, a four-year starter, had nine interceptions and 44 tackles for the national champion Hurricanes in 2001.

More importantly, he is perceived to be a playmaker in the mold of Lewis, who played middle linebacker for Miami before joining Baltimore as the 26th pick in the 1996 draft.

“When Ed Reed came in to visit us last week, he talked about playing with Ray Lewis,” said Ozzie Newsome, the Ravens’ senior vice president of football operations. “There’s something about that Miami Hurricane persona that he has. You talk about passion? Ed Reed has passion.”

Reed was generally recognized as the leader of a Miami defense that allowed only 9.4 points per game, forced 45 turnovers and recorded three shutouts. The 5-foot-11, 195-pounder scored the game-clinching touchdown against Boston College had nine tackles in the Rose Bowl against Nebraska.

“The thing that really sold me on him is, every time Miami’s defense needed a play to be made, Ed Reed made that play. When they needed a fire to be put out, Ed Reed put out that fire,” Newsome said. “That’s the type of player we’ve had on our defense.”

Reed is expected to step in at safety in backfield that is without three starters from last year: cornerback Duane Starks and safeties Rod Woodson and Corey Harris. Second-year player Gary Baxter will be moved from safety to cornerback.

“We’re starting to build a defense again, and Ed Reed is an integral part of it,” Newsome said.

Ravens scouting director Phil Savage visited Miami on several occasions over the past two years, and came away each time a little more impressed with Reed.

A football player from one of the most prestigious programs in the country – the same school that produced Lewis, who has led the Ravens in tackles in each of his six seasons and was named NFL defensive player in 2000.

“Based on the accounts that I’ve seen, Ed Reed was indeed the heart and soul of that Miami team,” Ravens coach Brian Billick said. “He was their emotional leader. He’s the guy they leaned on. He’s the one that talked to the team before they went on the field.

“When you add that dynamic into the physical abilities and what you see on the field, that’s the kind of leadership – the Ray Lewis type energy – people see the minute he walks onto the field.”

Reed, who arrived at Miami two years after Lewis left, is eager to make up for lost time.

Like Lewis, Reed isn’t shy on the football field and doesn’t consider banging helmets and shoulder pads to be a job.

“It’s fun to me,” he said. “I’m like a little kid out there. I enjoy making plays, and I love being around the ball.”