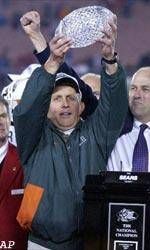 PASADENA, Calif. (AP) – Without a loss and without a doubt, Miami is the national champion.

The Hurricanes completed a perfect season by overwhelming Nebraska 37-14 in the Rose Bowl on Thursday night, ending any debate about who is No. 1.

With Ken Dorsey throwing three touchdown passes – two to receiver Andre Johnson – Miami rolled to a 34-0 lead in the first half.

“The entire team deserves to be MVP tonight,” said Dorsey after he and Johnson were selected as co-MVPs. “Our defense stepped up to the challenge and did a great job. Our offensive line, receivers, everybody did a great job against a great team.”

Johnson added: “I felt like I had something to prove so I brought my `A’ game.”

The stunned Huskers, beaten 62-36 by Colorado in their previous game, had no answer for Miami’s speed and ferocious defense. The lopsided score raised even more questions about whether Nebraska belonged in the Bowl Championship Series’ title game.

The Associated Press poll of sports writers and broadcasters was to be released early Friday, with the Hurricanes a lock to win their fifth national title, all since 1983. Their last championship was in 1991.

Top-ranked Miami (12-0) didn’t have to wait to pick up the trophy awarded by the USA Today/ESPN coaches’ poll, which automatically goes to the winner of the BCS championship game.

Oregon, a 38-16 winner over Colorado in the Fiesta Bowl on Monday, was hoping for a Nebraska win to claim a share of the title, but the Ducks will probably end up second in the final polls.

Nebraska (11-2) and its Heisman Trophy-winning quarterback, Eric Crouch, had promised there would not be a repeat of the pitiful performance against Colorado. They were wrong, unable to do much against the Miami defense until the game was already out of reach.

“We talk about talent all along, but the thing that set this team apart is character,” Miami coach Larry Coker said. “They refused to give in, refused to flinch, and they got the job done week in and week out.”

“We played a great football team in Miami and they were on top of their game,” coach Frank Solich. “We helped them with turnovers in the first half. We got in such a big hole, it was difficult.”

Dorsey opened the scoring with a 49-yard TD pass to Johnson, then found him for an 8-yard TD with about 3{ minutes left in the half. Between those TD passes, Clinton Portis ran 39 yards for a touchdown, safety James Lewis returned an interception 47 yards for a score and Dorsey connected with tight end Jeremy Shockey on a 21-yard TD pass – all in 3:53.

And just like that, Miami stretched its winning streak to 22 games, and made the 53-year-old Coker just the second coach to win a national title in his rookie season. Michigan’s Bennie Oosterbaan did it in 1948.

Nebraska and Miami came into this Rose Bowl having played three previous games with national titles on the line, all in the Orange Bowl. Miami won twice, in ’83 and ’91, Nebraska once, in ’94.

Dorsey threw for a career-high 362 yards, completing 22 of 35 passes with one interception, while Johnson caught seven passes for 199 yards. Portis added 104 yards on 20 carries.

Nebraska just couldn’t compete. It managed only 259 total yards – nearly 200 under its average.

The Huskers finally scored on Judd Davies’ 16-yard run with 2:39 left in the third quarter, and DeJuan Groce added a 71-yard punt return for a TD early in the fourth period.

Todd Sievers kicked a 37-yard field goal with 10:04 left for Miami’s only points of the second half.

Though Husker fans made up most of the crowd of 93,781, it was the 20,000 or so orange-clad Hurricanes fans who did most of the cheering.

Crouch picked a bad time for one of the worst games of his record-setting career, but Miami’s defense swarmed the option and rarely gave him room to run.

On Crouch’s third carry of the game, linebacker D.J. Williams stripped the ball away and William Joseph recovered. On the next play, Dorsey hooked up with a wide-open Johnson – safety Keyou Craver fell on the coverage – for the 49-yard TD pass with 6:51 left in the first period.

Nebraska’s Josh Davis fumbled the ensuing kickoff on a crunching hit by Markese Fitzgerald, and Sievers recovered at the Huskers 34. Nebraska survived the turnover, but Miami was far from finished.

Portis took a handoff from Dorsey, slipped at the line of scrimmage but kept his balance, then avoided two tacklers and outran the secondary to the end zone.

Four plays later, Crouch’s pass went through the hands of Tracey Wistrom and Lewis grabbed the ball just before it hit the ground and ran 47 yards untouched to make it 21-0.

On Miami’s next possession, Dorsey hit Johnson for 45 yards and then connected with Shockey for the 21-yard score with 10:40 left in the half. Sievers missed the extra point, but it didn’t matter. The Huskers were all but finished.

Last year, Miami was edged out of the BCS’ title game in the Orange Bowl by Florida State, and vowed this season to make it to Pasadena.

There were close calls along the way – an 18-7 win at Boston College, and a 26-24 season-ending victory at Virginia Tech. But in the end, the Hurricanes ended up as the only unbeaten team in the land and walked off with another national title.