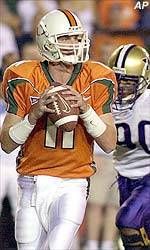 MIAMI – Everything is clear for No. 1 Miami: The Hurricanes need onemore victory to secure a spot in the Rose Bowl and play for a fifth nationalchampionship.

In a week filled with upsets, Miami (10-0) quickly made sure it kept itselfon track for the national title game. The Hurricanes, behind three turnoversand a quick-striking offense, scored 30 second-quarter points and led 37-0 athalftime.

Miami cruised from there, sitting most of its starters for the entire fourthquarter and making sure they remained healthy for the season finale nextSaturday at Virginia Tech (8-2).

If the Hurricanes beat the Hokies, they will guarantee themselves a berth inthe Bowl Championship Series title game Jan. 3 at the Rose Bowl. Who Miamicould face is still anybody’s guess.

With No. 2 Nebraska and No. 4 Oklahoma losing, third-ranked Florida appearsto be in position for a trip to Pasadena. The Gators need to beat No. 7Tennessee next Saturday and win the Southeastern Conference championship gameto have any chance. The Volunteers, No. 5 Texas and No. 6 Oregon also are inthe picture.

The Hurricanes have a much clearer path, and most would agree that theybelong in the title game – especially after games against Syracuse andWashington (8-3).

Miami overwhelmed the then-No. 14 Orangemen 59-0 last Saturday and did thesame to the Huskies.

Since that first-and-goal play against Boston College, when the ball bouncedoff Mike Rumph’s knee and into Matt Walters’ hands to preserve a win over theEagles, the Hurricanes scored 109 consecutive points without giving up anypoints.

The Huskies ended that stretch with a third-quarter touchdown Saturdaynight. But they did little else in the game.

Cody Pickett was 14-of-29 passing for 157 yards. He fumbled twice, threwfive interceptions and was sacked four times. He had two more passes fallthrough the hands of Miami defenders in the first half.

Jonathan Vilma picked off Pickett’s pass on the opening possession, settingup a 7-yard touchdown run by Portis. Washington bounced back, though, driving79 yards, but failing to score on fourth-and-goal.

Miami seized the momentum from there, scoring on three of its next fivepossessions. Portis had a 30-yard scoring run and a 5-yard touchdown reception.The Hurricanes forced a safety, and Phillip Buchanon returned the ensuing freekick 61 yards to set up Najeh Davenport’s 15-yard TD reception.

Two plays later, William Joseph tipped a pass and Jerome McDougal picked itoff and ran 14 yards to make it 37-0. It was exactly what Washington coach RickNeuheisel hoped to avoid – a “flurry of points.”

Dorsey finished 14-of-21 for 189 yards. He said earlier in the week thatMiami wasn’t looking for payback or revenge for Washington’s 34-29 win overMiami last season. But the way the game unfolded seemed to say differently.

The Hurricanes had a spirited pregame ceremony for their seniors. Offensivetackle Joaquin Gonzalez gave his teammates an animated pep talk on the benchwith 7:28 left in the second quarter and a 37-point lead.

Miami then called timeout with 26 seconds remaining in the third quarter sothe seniors could take a bow at midfield and exit to a standing ovation infront of the soldout stadium.

Coach Larry Coker made an even stronger point with five minutes to play,calling a passing play and scoring a touchdown to make it 65-7.