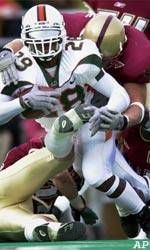 BOSTON – The last bounce went Miami’s way, and the top-ranked Hurricanes are still in the chase for the national championship

Ed Reed completed a bizarre 80-yard interception return for a touchdown with 13 seconds left as Miami avoided the biggest upset of the season with an 18-7 victory over Boston College on Saturday.

The Eagles (6-3, 3-2 Big East) were poised to pull out their biggest win since upsetting then-No. 1 Notre Dame in 1993, but the Hurricanes (8-0, 5-0) survived four interceptions by Heisman Trophy contender Ken Dorsey.

With Miami clinging to a 12-7 lead in the final minute, BC quarterback Brian St. Pierre moved his team from its own 30 to the Hurricanes 9. With just over 20 seconds left in the game, St. Pierre dropped back and tried to hit Ryan Read at about the Miami 2.

But the low pass ricocheted off Miami cornerback Ed Rumph’s left knee and into the hands of 262-pound defensive tackle Matt Walters at the 10. The lineman ran 10 yards before teammate Reed grabbed the ball from him at the 20 and outraced a BC defender to the end zone.

Todd Sievers, who kicked four field goals for Miami, then missed the extra point. But the game was won, and stunned BC players sank to a knee and stared at the ground.

Despite playing without William Green, the nation’s leading rusher who was suspended for breaking team rules, the Eagles gave Miami all it could handle.

On defense, coach Tom O’Brien employed a four-man rush instead of the usual blitzing schemes the Eagles have used for most of the season. The change baffled Dorsey, who threw two interceptions in the first quarter and two more in the third – doubling his total to eight interceptions this season.

Dorsey, who more than likely lost his chance to win the Heisman as college football’s top individual player, finished 20-of-41 for 222 yards. Until the final touchdown run, Miami last went without a TD in a 47-0 loss to Florida State in 1997.

On the final drive, BC took over after Miami’s fifth turnover – a fumble by Frank Gore recovered by free safety Ralph Parent with 2:09 left. With no time outs, St. Pierre hit Derrick Knight – Green’s replacement – for 15 yards to midfield. On foruth-and-10, he hit Dedrick Dewalt for 21 yards to the Miami 9. On the next play, the ball bounced Miami’s way, and the Hurricanes knew they were more lucky than good.

Sievers kicked second-quarter field goals of 38, 24 and 43 yards for a 9-0 halftime lead – the first time this season Miami failed to score a first-quarter point or a first half TD. Dorsey’s third interception – by linebacker Josh Lott at the BC 19 – led to St. Pierre’s TD pass to Ryan.

Sievers kicked a 47-yard field goal early in the fourth period, but BC’s Kevin McMyler was wide right with a 28-yard attempt with 9:43 left. Had the kick been good, the Eagles could have won with a field goal in the final frantic seconds.

Miami is used to problems playing at Alumni Stadium, where 44,500 fans showed up on a brisk fall day. Two years ago, the Hurricanes pulled off the greatest comeback in school history, rallying from a 28-point deficit for a 31-28 win. In ’97, Miami won here 45-44 in double OT, and in ’95 the ‘Canes won 17-14 on a last-minute field goal.