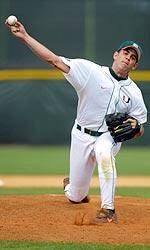 CORAL GABLES, FL – Senior Charlton Jimerson’s two-run homer highlighted a four-run second inning as Miami opened up a 6-1 lead and went on to defeat Bucknell, 14-6, in the opening round of the Coral Gables Regional at Mark Light Stadium. Jimerson went 2-4 on the night with a double, home run, three runs scored and a career-high five RBI.

Sophomore Kiki Bengochea (9-4) went seven innings giving up six runs on 11 hits in picking up his ninth win of the season. Junior Kevin McDowell (2-5) took the loss for the Bison.

Miami (45-12), which has now won 12 straight post-season games at Mark Light Stadium, advances to play Florida in the winner’s bracket game Saturday at 3:30 p.m. while Bucknell (31-18) will play Stetson in the regional’s first elimination game starting at noon.

Sophomore DH Danny Matienzo also had a big night for the Hurricanes tying a season-high with five RBI. Matienzo went 2-for-5 on the night including a towering solo homerun to right field in the eighth that landed on the roof of the UM parking garage.

UM loaded the bases in each of the first three innings scoring two in the first, four in the second and three in the third. Down 9-1, Bucknell mounted a comeback scoring five runs over the next three innings to cut the deficit to 9-6 after six.

Miami put the game away in the eighth scoring five runs including Matienzo’s blast and a bases-clearing double by Jimerson.