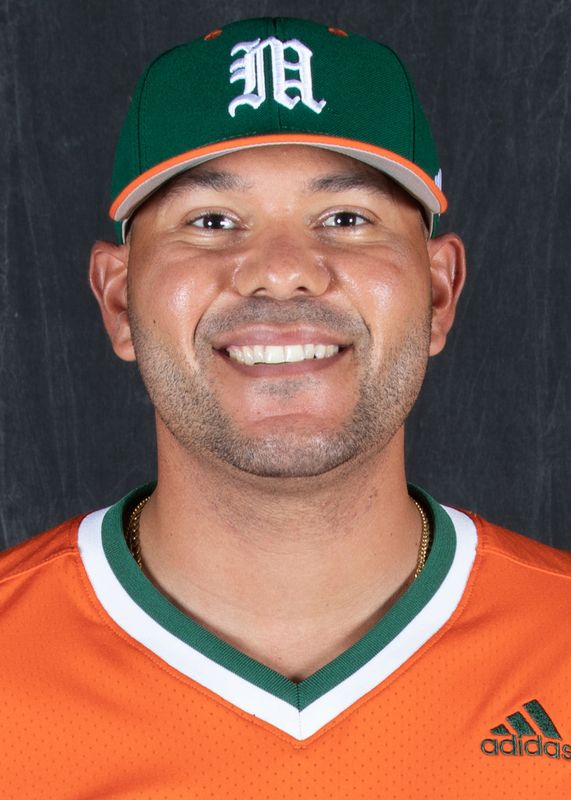 Chris Dominguez joined the Hurricanes baseball program prior to the 2021 season, accepting a position as an assistant coach.

Dominguez will be the Hurricanes’ infield coach and will also assist with Miami’s hitters. A Miami native, he joins the program after spending the 2020 season as an assistant coach working with infielders and hitters at Bellarmine University.

Following a standout career at the University of Louisville in which he was a two-time All-American, Dominguez carved out an 11-year career (2009-19) in the professional ranks, including stints with the San Francisco Giants and Cincinnati Reds.

Dominguez played in over 1,000 professional games and totaled 134 home runs, 210 doubles, 20 triples and 592 RBIs while hitting .263. In 2010, his first full season in pro ball, he cranked 21 homers, 32 doubles and four triples while amassing 101 RBIs with the Augusta GreenJackets, the Class-A affiliate of the Giants. In 2014, Dominguez hit 21 homers and stole 21 bases for the Fresno Grizzlies, the Triple-A affiliate of the Giants.

Dominguez had a phenomenal collegiate career at Louisville. As a redshirt junior in 2009, his final season with the Cardinals, the third baseman was named BIG EAST Player of the Year and a first-team All-American by Baseball America, Louisville Slugger and PING! Baseball after batting .345 with 25 home runs and 82 RBIs.

The BIG EAST co-Player of the Year in 2008, Dominguez earned third-team All-American plaudits from Baseball America, Louisville Slugger, PING! Baseball and the NCBWA after hitting .365 with 21 homers and 75 RBIs. That followed a 2007 campaign in which the infielder was named an honorable-mention Freshman All-American by PING! Baseball after swatting 15 home runs and 19 doubles while driving in 61 runs.  Dominguez played a central role in Louisville making its first-ever appearance in the College World Series in 2007. He was named MVP of the Columbia Regional after batting .421 and followed by launching three homers in the CWS.

Dominguez was an MLB draft pick on three separate occasions. He was chosen by the Texas Rangers in the 17th round in 2005 out of Gulliver Prep (Fla.) High School, by the Colorado Rockies in the fifth round in 2008 after his redshirt sophomore season at Louisville and by the San Francisco Giants in the third round in 2009 after his last season with the Cardinals.