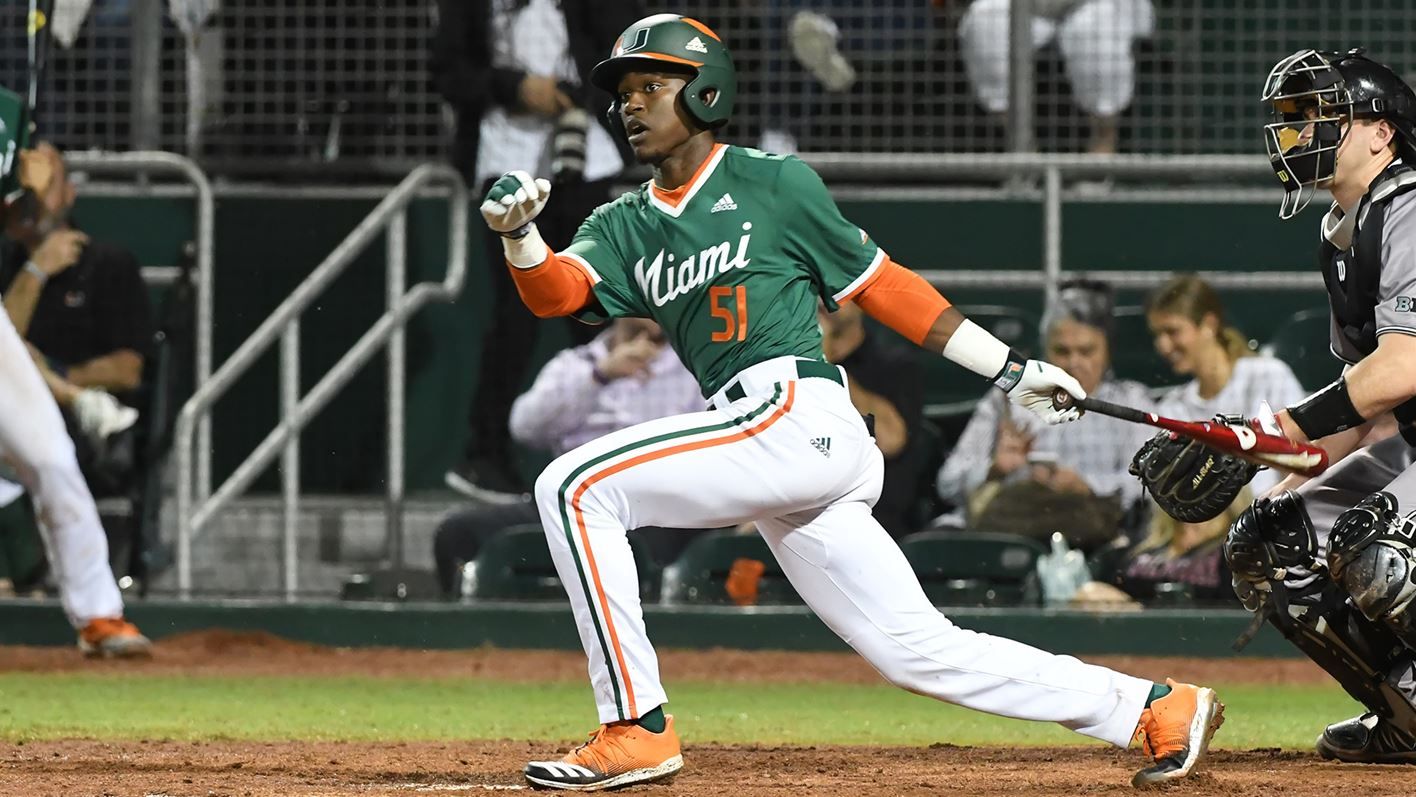 An alumni team that featured Washington Nationals prospect Frankie Bartow, Tampa Bay Rays farmhand Carl Chester and fan favorites like Kevin Brown and Kris Clute fell short to the 2020 Canes, 3-0. Gino DiMare, who starred as an outfielder for the Canes from 1989-92, was happy to see so many players come back to Coral Gables to kick off the 2020 season.

“First of all, the First Pitch Banquet last night was a great start,” DiMare said. “I think we had 35 guys back for the banquet. I thought it was a great event and then to carry over to the Alumni Game, it was a great turnout. I mentioned last night at the banquet, this program is about the players and to have so many guys come back shows you how much they care about the program.”

The Canes offense got going early, scoring a pair of runs in the first inning against Bartow. Anthony Vilar started the rally with a rocket line drive up the middle that ricocheted off of Bartow’s glove. Three batters later, Raymond Gil drove Vilar home with a sacrifice fly to deep center. Alex Toral followed with an RBI double to right that put the Hurricanes ahead, 2-0.

Sophomore right-hander Slade Cecconi was impressive on the mound for the Hurricanes, allowing just one hit over four shutout innings while striking out 11 of the 13 batters he faced.

Tony Jenkins made a diving catch to rob Edgar Michelangeli of extra bases in the top of the fifth. The junior centerfielder drove in Miami’s final run of the game in the bottom half of the inning with an RBI single thru the left side that pushed home Gabe Rivera.

“He’s looked great, I hope it carries over,” DiMare said of Jenkins. “We’re a better team, if he’s in the lineup and playing well. What I mean by that is he’s got speed, he’s our best outfielder by far, so we’re a better defensive team when he is in the outfield. If he can be in the lineup and stay in the lineup and be consistent offensively, basically cutting down strikeouts and getting on base, if he does that, we could put more pressure on the defense with him running the bases. So it gives you that balance and he has played well. He needs to do it now in the season, when it matters.”

Daniel Federman, Tyler Keysor, JP Gates, Albert Maury Jr., and Spencer Bodanza combined to allow just one hit over the final five innings to close out the shutout. Gates earned the win, while Bodanza picked up the save on a night where Miami’s pitchers struck out 19 batters.

“They threw strikes for the most part and I thought we did a good job of pounding the zone,” DiMare said. “The tempo was good. It was what you’re looking to do now with the changing of how we are giving signs, so I thought the tempo was good, Some of our guys velocities were really good, so from a pitching standpoint, I thought we threw very, very, very well.”

Prior to the Alumni Game, the team signed autographs and took pictures with hundreds of fans at the annual Fan Fest.

Miami opens its second season under DiMare’s tutelage on Feb. 14 with the opener of a three-game series against Rutgers (Feb. 14-16). For information on season tickets, click HERE or call 305-284-2263.