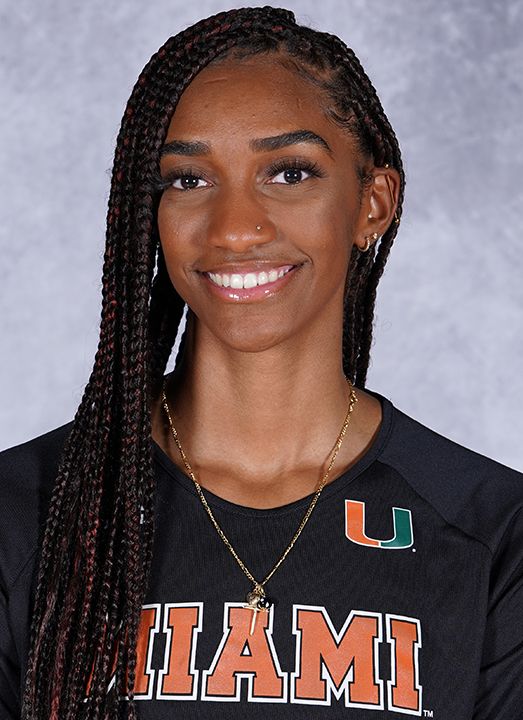 2021 (Junior): Was one of two Canes to start all 30 matches and play in all 107 sets… ended the year ranked 11th in the NCAA with 1.36 blocks per set and 15th with 146 total blocks… posted the second most blocks per set in the ACC in the regular season with 1.35 and the fourth highest blocks mark of 139… ranked eighth in the regular season in the ACC with a .335 attacking percentage… moved to third in program history with a .325 career attacking percentage… moved into 10th in school history with 245 block assists in her career and fifth with 1.20 career blocks per set… posted 1.36 blocks per set, the fourth most in a single season at Miami… recorded the fifth highest amount of blocks for a Hurricane in a single-season with 146… tallied 128 block assists for the sixth most in program history… notched the 10th best attacking percentage for a season in UM history at .330… recorded nine blocks against South Florida (9/3) for the third most in a four set match at Miami… her nine blocks against NC State (10/3) is the second highest in a three set contest… her nine blocks against South Florida and NC State are the sixth highest for a match in program history… finished with four solo blocks against South Florida (9/3), the most in a match in the school record book… led Miami in blocks in 18 matches, kills in five contests and points in seven games… had 17 matches with five or more blocks… ended the year with 12 games with double-digit kills… was first on Miami with 146 blocks and 1.36 blocks per set… finished third on the team with 259 kills, posting 2.42 kills per set… recorded a career year in kills (259), digs (53), digs per set (0.50), blocks (146) and blocks per set (1.36)… tallied a career mark of 15 kills against Pitt (10/15)… notched a career best five digs at FIU (8/28)… totaled nine blocks at South Florida and against NC State, a new career high… hit .867 at Texas State (9/10) with 13 kills.

Spring 2020: Did not compete in the spring season due to injury.

2019 (Freshman): Led the Canes with 84 total blocks… Took over the starting MB position and appeared in 89 of Miami’s 102 sets played this season… Hit a career-high .364 against FGCU at the Hurricane Invitational (Sept. 20)… Recorded a season-high 12 kills against Syracuse (Oct. 18)… Boasted a season-high eight blocks at UNC, tying for the fifth-most in Miami history in four sets… Sank three aces against Louisville at home on Nov. 8, adding three kills and on block… Ended the season with 10 kills against Georgia Tech and four blocks (Nov. 29).

High School: Was a multi-sport athlete in high school, playing volleyball and basketball for four years… Was named the Standard Times Player of the Year, both junior and senior year and was named to the Super TeamAll Sports for the Standard Times… Finished her high school career with 956 kills and a .474 attack percentage… She also registered 213 blocks and 85 aces.

Personal: Daughter of Jose and Lucia Leao… Has three brothers, Jack, Cyril and Javon and two sisters, Ariana and Eliza.