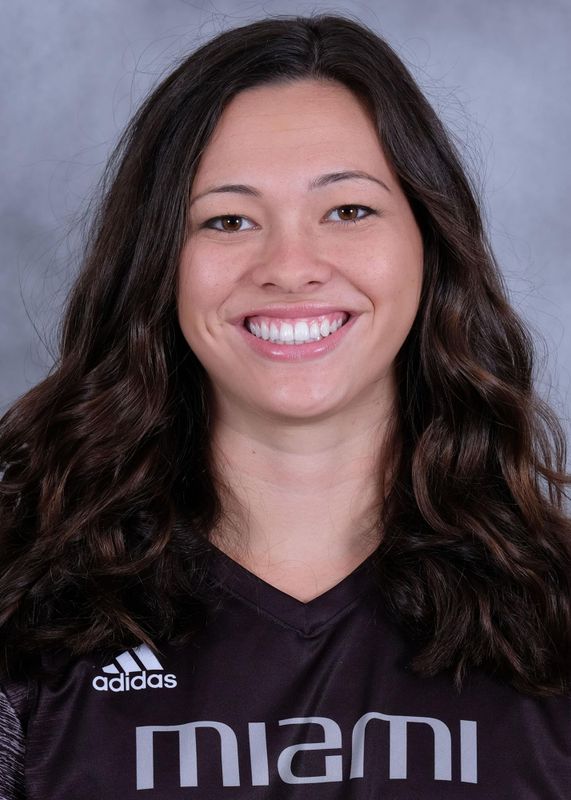 2020 (Junior): Earned the start in goal in all eight conference matches … Collected nine starts on the year … Registered 40 saves on the season with a .560 save percentage … Played the full slate against Clemson, registering five saves … Registered a season0high seven saves against Wake Forest (10/1) … Matched that performance with seven saves at Virginia (10/4) ,,, Recorded six saves at Pittsburgh (10/18).

2019 (Sophomore): Earned the start in 14 out of 15 matches as a sophomore … Logged 1,229 minutes in goal … Registered 63 saves and 4.20 saves per game … Finished the season with a 70.8 save percentage … In her first career start for the Hurricanes, recorded three saves and logged 45 minutes during the shutout victory against UTRGV (8/22) … Aided Miami to a 4-1 victory against Fairleigh Dickinson with nine shots faced and four saved, posting for a first half shutout (8/25) … Played the entire first half and collected three saves for Miami against FAU (8/29) … Played a career-high 65 minutes against SDSU (9/7), recording a save and allowing zero goals against … Registered her first career, complete match shut out, while saving three shots against Stetson (9/12) … Posted a career-high six saves at Florida (9/15) … Made her ACC debut, starting in net for the Hurricanes and registered four saves against Virginia Tech (9/21) … Recorded three saves and played the full 110 minutes against Pittsburgh (9/29) … Corralled a then-career-high six saves against Virginia (10/4) … Recorded five saves at Notre Dame (10/10) … Secured three first half saves to collect her first career ACC victory, a 2-1 triumph over Syracuse (10/13) … Registered a career-high eight saves at Florida State (10/18) … Picked up her second ACC victory, playing 109 minutes against Clemson (10/24) collecting five saves … Notched seven saves in the season finale against third-ranked UNC (10/31).

Personal: Full name is Tyler Speaks … Born March 6, 2000 … Daughter of Tara and Robert White … Father is a real estate and home building agent and mother does land acquisitions … Has two older brothers, Trey and Ben and a younger brother, Brennan … Majoring in Psychology … Favorite athlete is Carly Lloyd… Chose Miami because when she visited campus she fell in love with it and also because she loves the beach and warm weather.