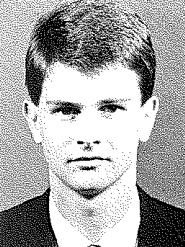 As a Sophomore (1988-89): Displayed increased confidence in his shot and ability to create offensive opportunities … started 17 of his 30 appearances, missing only the Florida Atlantic Game with the flu … was No.1 on the UM team in free throw percentage with a mark of 95.5% (42-44), including making good on his last 33 straight attempts from the charity stripe … led the team in assists with 109 (3.6apg) … recorded 10 assists, three steals and four points in opener vs. Maryland- Eastern Shore … led the Canes in rebounding vs. UCLA with six boards while adding seven assists … shot a perfect three-for-three from the field, including two-for-two on three-pointers for eight points vs. Bethune-Cookman … Tallied five points and four rebounds vs. an oversized Duke team … Tallied nine assists, four rebounds and four points in helping Miami to a 102-66 win over Long Island … Made seven of eight free throws for 11 points while adding three rebounds, three assists and two steals in Miami’s 102-69 defeat of Pennsylvania … scored all eight of Miami’s overtime points in 99-94 OT win at NCAA tourney … Dished out five assists in upset of No.16 Kansas, 87-86 … Shot a perfect three-for-three FG’s and four-for-four FT’s for 10 points while adding two rebounds and eight assists in 107-86 win over Brigham Young … Miami was 3-0 when Hocker scored in double figures.

As a Freshman (1987-88): Demonstrated great basketball instincts and big time passing skills as he recorded a team leading 130 assists, the highest individual total since the rebirth of the UM Program … received a baptism by fire when his first career start came against Gary Grant of Michigan (first round NBA pick of Seattle, later traded to LA Clippers) when he held his own with four points and five assists … dished out 10 assists in Miami’s 96-68 victory over Colgate in the first round of the City of Miami Classic … scored 14 points against Duquesne at the great Alaska Shootout … scored 11 markers and dished out five assists in Miami’s road to victory over Providence (83-77) … is joined by Joseph Randon as the two Hurricanes from the state of Texas.