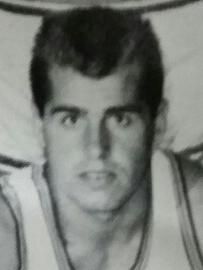 ?Senior guard with 2 letters earned … In two brilliant campaigns, Gee has established himself as one of the best basketball players ever to come to University of Miami and ? with Rock Jones ? gives Miami the greatest pair of guards it has had at one time … Gee has been a starter from his first day of practice and if he improves as much this year as he did in the 1965 -66, he will be pressing for All ?American acclaim … Gee is a playmaker for the Hurricanes and can operate anywhere in a fast break which Miami uses effectively in its high scoring operations … He is a brilliant outside shot and can drive in well for the layup shot. He does an excellent job of feeding the big men for the close-in shots … Junior was a whiz from high school days… His school, with only 200 students was Undefeated at home in his four years there … He starred in baseball as well, batting .321, .357, and .417… As a Miami freshman, he averaged 24.6 points … He picked up 100 points in the AAU tournament, a feat which brought him the “Most Valuable Player” nod … Gee started slowly as a sophomore, picking up only five points in a game in which Miami 136 on Tampa … But in his next outing in the Steel Bowl in Pittsburgh, his 18 points upset favored Duquesne and launched Miami toward victory in that event … He didn’t break the 20 point barrier until the end of the season … In his last two games, he scored 26 on Rollins and 20 against Florida State … With Miami’s offense being rebuilt last year (after the loss of its forwards and the collapse of its centers), the burden fell heavily on Miami’s guards and Gee, in addition to carrying the playmaking burden, found time to in with 441 points … This gave him 710 for two seasons, making him the 19th highest point maker at Miami … He still has one season to go.