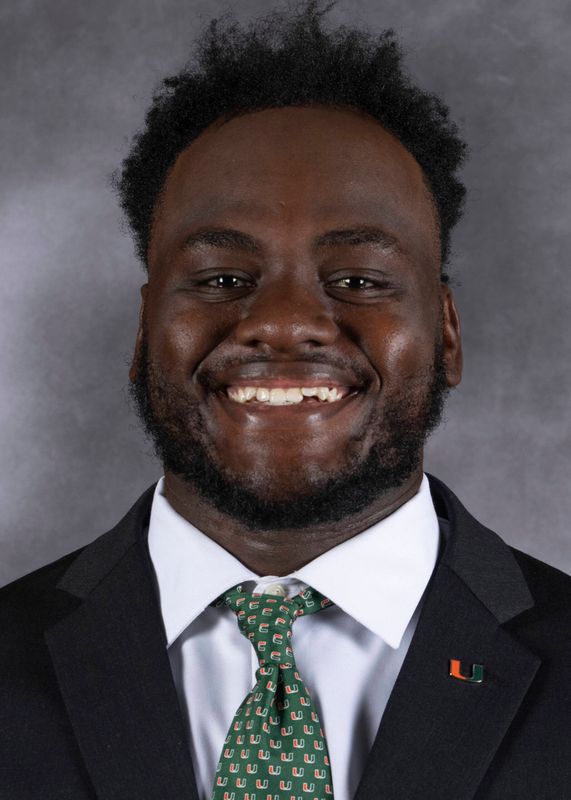 Before Miami: Spent first two seasons of career (2020, 2021) at Oregon, where he played under head coach Mario Cristobal and offensive line coach Alex Mirabal…Did not see any game action in COVID-shortened 2020 true freshman season…Redshirted 2021 season in final year with Ducks.

High School: Four-star prospect by ESPN and Rivals … Consensus top-20 offensive guard in the country and the No. 1 guard in Florida by ESPN, Rivals and 247Sports … Rated by Rivals as the No. 192 player overall and the No. 6 offensive guard in the nation … Finished as a four-star prospect at No. 316 overall and the No. 14 offensive guard in the country in the final 247Sports composite ranking … Tabbed the No. 16 guard nationally by ESPN and No. 20 by 247Sports … Consensus top 60 player in Florida … Selected to the PrepStar Top 150 Dream Team and ranked No. 88 overall … A two-year letterman at South Dade High School after playing freshman and sophomore years at Keys Gate Charter … A team captain as a senior … Led South Dade to a Class 8A state tournament appearance … Earned Class 8A first-team all-state recognition as a junior … Named first-team All-Dade for Class 8A-6A by the Miami Herald … Opened holes for a South Dade offense that finished the year with over 4,500 total yards … Chose Oregon over Auburn, Florida, Florida State, Georgia, LSU, Nebraska and Tennessee, among others.