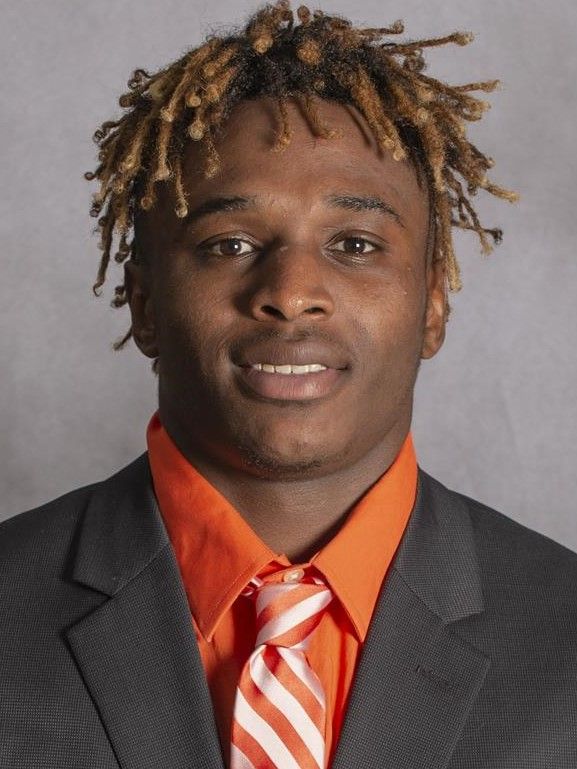 2017 (True Freshman): Saw action in all 13 games with four starts…Hauled in 17 passes for 374 yards with two touchdowns…22.0 yards-per-reception was best mark on team…Had longest reception of any Hurricane all season, 78-yard catch against North Carolina (Oct. 28)…Served as Miami’s primary kickoff returner and averaged 21.6 yards per return on 32 returns…Saw action in season opener against Bethune-Cookman (Sept. 2) and served as primary kickoff returner…Totaled 65 return yards on three kickoffs, including long return of 31 yards…Had one catch vs. Wildcats…Finished with 69 kickoff return yards, incluing long return of 29, in win over Toledo (Sept. 23)…Recorded one catch and had one kickoff return in win at Duke (Sept. 29)…Had two catches for 11 yards in win at Florida State (Oct. 7)…Hauled in 70-yard reception and finished with two catches for 78 yards against Georgia Tech (Oct. 14)…Posted two catches for 61 yards and one touchdown in win against Syracuse (Oct. 21)…Recorded first touchdown of career on 48-yard reception against Orange…Added career-best 122 kick return yards against Syracuse…Made first start of career at North Carolina (Oct. 28) and finished with totals of three catches and 101 yards, including 78-yard touchdown…100-yard receiving game was first of career…Started against Virginia Tech (Nov. 4)…Caught two passes for 24 yards in start against Notre Dame (Nov. 11)…Made one 33-yard catch in win over Virginia (Nov. 18)…Totaled 90 kickoff return yards on four returns at Pittsburgh (Nov. 24)…Had one 20-yard reception and totaled 106 kickoff return yards in ACC Championship Game against Clemson (Dec. 2)…Started and had 48-yard reception in Capital One Orange Bowl against Wisconsin (Dec. 30).

High School: Consensus four-star wide receiver prospect by 247Sports, ESPN, Rivals and Scout…Rated as the No. 1 player in the state of Illinois…Listed as the sixth-rated wide receiver and the No. 2 player in the state of Illinois by 247Sports…Ranked No. 55 in the final ESPN300 rankings… Took part in The Opening in 2016…Starred in the 2017 Under Armour All-America Game and posted game records of 148 yards receiving and two touchdowns…Selected to the Top 150 PrepStar All-America Dream Team…Was a three-year starter in high school…Finished his career with 177 receptions for 3,532 yards and 41 touchdowns…Helped guide East Saint Louis High School to a perfect 14-0 season and its first Illinois State Championship in eight years…Hauled in a pair of touchdowns in the state championship…Caught 50 passes for 1,101 yards and 13 touchdowns as a senior…Coached by Darren Sunkett at East Saint Louis High School…Chose Miami over offers from Louisville, Oregon, Illinois, Michigan and Alabama among others.