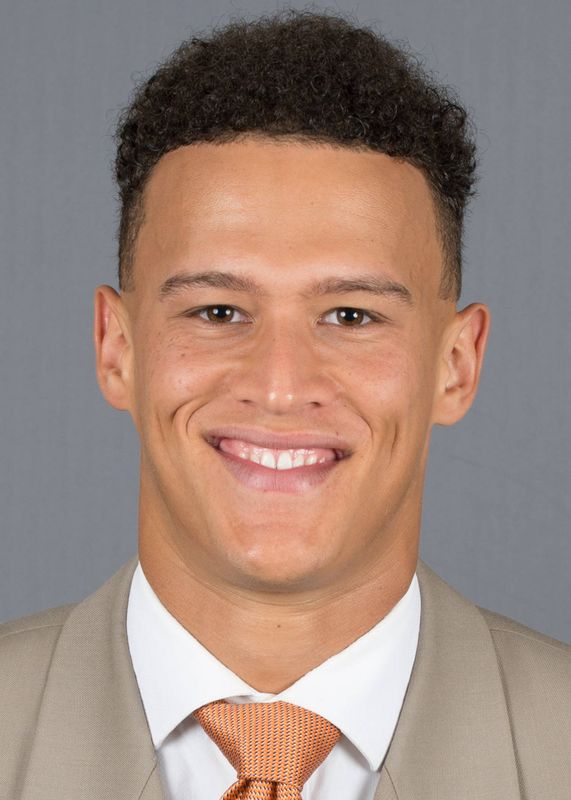 2016 (Junior): Served as team’s starting quarterback for third straight season, starting all 13 games under center…Ended his career as the all-time leading passer in Miami history with 9,968 passing yards, 720 completions and 1,188 attempts…69 career passing touchdowns are third-most in Miami history…Finished final year with career-best 3,532 passing yards and 27 touchdowns compared to just seven interceptions…Completed 261 of 421 pass attempts for career-best 62.0 completion percentage…Averaged 271.7 passing yards per game…Became first player in history to throw for over 3,000 yards in three straight seasons…Started season opener against Florida A&M (Sept. 3) and tied career high with four touchdown passes…Finished 12-for-18 for 135 yards against Rattlers with no interceptions…Moved into tie for seventh place in Miami history with 46th touchdown pass of career against Florida A&M…Finished 17-for-31 for 191 yards and two interceptions in start vs. FAU (Sept. 10)…Threw for 368 yards on 21-for-27 passing with three touchdowns and one interception in road win at Appalachian State (Sept. 17)…Moved into tie for third place in Miami history with 49th touchdown pass of career againt Mountaineers…Finished 13-for-19 for 241 yards with one touchdown and no interceptions in start against Georgia Tech (Oct. 1)…Touchdown was 50th of career…Threw for 214 yards on 19-for-32 passing with two touchdowns and one interception against Florida State (Oct. 8)…Tossed for 224 yards on 16-for-31 passes against North Carolina (Oct. 15)…Moved into fourth place in Miami history in career passing yards against Tar Heels…Finished with 323 yards on 23-for-38 passing with two touchdowns and one interception at Virginia Tech (Oct. 20)…Moved into third place in UM history in all-time passing yards with performance against Hokies…Threw for 288 yards on 26-for-42 passing against Notre Dame (Oct. 29) with one touchdown and one interception…Delivered dominant outing against Pittsburgh, finishing with career high 32 completions (32-of-47) with career high-tying four touchdown passes…Added fourth rushing touchdown of career in 356-yard performance against Panthers…Moved past Jacory Harris into second place in all-time passing yards at Miami with 228 yards in win at Virginia (Nov. 12)…Finished game against Cavaliers 14-for-29 with two touchdowns and one interception…77-yard touchdown pass to freshman Ahmmon Richards was season-long completion…Threw for 286 yards on 22-for-38 passing in win at NC State (Nov. 19)…Became Miami’s all-time passing yards leader with 396 yards in regular season finale win over Duke (Nov. 26)…Finished game against Blue Devils 22-for-35 and just nine yards shy of tying a career-high mark…Threw for career high-tying four touchdowns and zero interceptions in victory, including 76-yard TD pass…Earned Russell Athletic Bowl MVP honors in victory over West Virginia (Dec. 28), finishing with 282 yards and four touchdowns on 24-for-34 passing…Four touchdowns tied Miami bowl record set by Craig Erickson in 1991 Cotton Bowl…Elected to forego senior season to enter 2017 NFL Draft.

2015 (Sophomore): Enjoyed another prolific season under center, starting 12 of 13 games…Ended regular season ranked No. 1 in ACC in passing yards per game (274.5)…Threw for over 3,000 yards for the second straight year, tossing for 3,238 with 16 TDs compared to just five interceptions…Earned ACSMA and Coaches All-ACC third-team honors at quarterback…Moved into ninth place in all-time touchdown passes (42) and fifth place in all-time passing yards (6,436)…Started season opener against Bethune-Cookman (Sept. 5) and tossed for 173 yards, two touchdowns and zero interceptions…Had five-yard TD pass in first quarter and 17-yard TD in second quarter vs. Wildcats…Finished 21-for-32 with 287 passing yards and 1 TD in start vs. FAU (Sept. 11)…Threw for 379 yards in start vs. Nebraska (Sept. 19)…Tossed two touchdowns and one INT with long pass of 52 yards vs. Cornhuskers…Pick was first of season and snapped steak of 110 attempts with no interceptions…10-yard TD pass in first quarter vs. Nebraska extended streak to 16 straight games with at least one TD pass…Tossed for 255 yards on 24-for-39 passing in start at Cincinnati (Oct. 1), marking first game of career without TD pass…Compiled just the 11th 400-yard passing game by a UM quarterback since 1980 in start at Florida State (Oct. 10), setting career marks in completions (29), attempts (49) and passing yards (405)…Threw for three touchdowns and no interceptions against the Seminoles…405 yards was most by UM quarterback vs. FSU since at least 1980…Went 19-for-30 for 296 yards in start vs. Virginia Tech (Oct. 17), tossing two TDs and no interceptions…Started 6-for-10 for 51 yards in start vs. Clemson (Oct. 24) before being removed due to injury…Missed start at Duke (Oct. 31)…Returned to start vs. Virginia (Nov. 7) and delivered 20-for-26, 286-yard, two-touchdown performance…Had season-long 67-yard touchdown strike in victory over Cavaliers…Had 326 passing yards and one touchdown in start at North Carolina (Nov. 14)…Tossed for 300 yards, one touchdown and zero interceptions in win over Georgia Tech (Nov. 21)…Threw for 261 yards and one TD in regular season finale win over Pittsburgh (Nov. 27)…Threw for 219 yards and one touchdown in the Hyundai Sun Bowl (Dec. 26) against Washington State.

High School: Consensus four-star quarterback prospect by ESPN, Rivals, Scout and 247Sports…Rated No. 112 overall prospect on ESPN300 Rankings…Fifth-best pro-style quaterback by ESPN and eighth-best by Rivals…Ranked No. 189 prospect regardless of position by Rivals…Rated No. 141 overall prospect and No. 7 pro-style quarterback by 247Sports…Played in Semper Fidelis All-American Bowl…Invited to “The Opening,” an all-star summer prospect camp…Named Los Angeles Daily News All-Area Player of the Year…Was 23-3 as starter at Chaminade…Threw for school-record 3,855 yards and 27 TDs as senior…Finished career with 5,730 yards and 40 TDs in two seasons…Led Chaminade to California Division II State Championship in 2013.