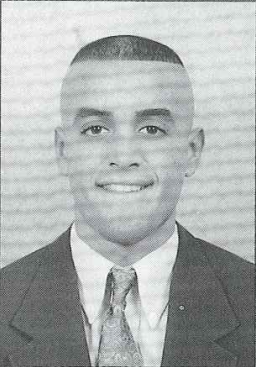 Fourth-year junior who originally made the team in the fall of 1992 as a walk-on and subsequently redshirted the 1992-93 campaign…was awarded a scholarship for the 1994-95 season…is a tireless worker who can often be found spending many hours in the gym improving his skills…is a good outside shooter and an aggressive defender…has connected on 40 percent of his three-point field goal attempts during his career…enters the season having played in 38 consecutive games, the second largest current streak on the team..is the only Hurricane on the roster from the state of New Jersey.

Was one of just five Hurricanes to play in all 28 games…started the first five games of the season at the point guard spot..his 1.23:1 assist-to-turnover ratio was second best on the team…finished fifth on the squad in assists (37), three-point field goals made (12) and three-point field goals attempted (37)…led or tied for the team lead in assists on three occasions…his two clutch free throes with nine seconds left closed the scoring in UM’s 61-57 nationally televised victory over Seton Hall (Feb. 22)…in that contest he tallied five points and one steal in nine minutes of action…scored a season-high 11 points (all in the first half), on 3-3 shooting from three-point range, in 16 minutes off the bench against Providence (Feb. 11)…had 11 of UM’s 28 first-half point against Providence…had nine points, on 4-5 shooting, in 15 minutes off the bench at Clemson (Dec. 20) and matched it with nine points (3-4 on three-point field goal attempts) in 17 minutes against Villanova (Jan. 25)…ISRAEL TOUR: Appeared in all six games and averaged 19.7 minutes per contest…his 2.5:1 assist-to-turnover ratio ranked second on the team and his 15 assists and six steal each ranked fourth…scored 27 points (4.5 ppg) and grabbed 20 rebounds (3.3 rpg)…tallied eight points and recorded team-highs in both assists (five) and rebounds (seven) in 19 minutes against Hapoel Holon (Aug. 19)…two days later, in the trip finale, against Hapoel Jerusalem he registered nine points, five rebounds, three assists and three steals in 28 minutes.

Saw action in 15 games and started six of the Canes final seven contests…in those final seven games he averaged 26.1 minutes, 7.7 points, 2.8 assists, connected on 54.8 percent (17-31) of his field goal attempts and 60 percent (12-20) of his three-point attempts…for the season he averaged 14.1 minutes, 3.8 points, shot 52.8 percent (19-36) from the floor and a team-best 56.5 percent (13-23) from three-point range…led the team in scoring teice and assists once…amassed seven points and two steal in 18 minutes against Villanova (Feb. 12)…had played in just seven of the first 19 games, totaling 10 minutes of action before the Villanova game…made his first career start in an ESPN game vs. Boston College (Feb. 16) and responded with a team-high nine points (3-of-5 three-point FGs) and a career and team-high five assists in 22 minutes…had six points, a career-high three rebounds and three assists in 22 minutes against Syracuse (Mar. 1)…played a career-high 33 minutes in the regular season finale at Villanova (Mar. 5) and tallied 10 points, three assists and a career-high three rebounds…scored a career and team-high 13 points (5-5 FGs, 303 three-pont FGs) and added two rebounds vs. Seton Hall in the BIG EAST Tournament (Mar. 10).

Made the team as a walk-on and sat out the season as a redshirt…practiced all year with the team and improved his skills.

High School: Bishop Ahr in Edison, NJ…was a two-year starter…averaged 17 points, 6.0 steals and 5.5 assists as a senior while guiding his team to a 24-3 record and the Greater Middlesex Conference Tournament title…earned Second Team All-Area honors from both The News Tribune and The Home News…coached by Bill Leahy.

Personal: Majoring in psychology…full name is Anthony Rosa…born October 6, 1974 in Perth Amboy, NJ…moved to Rio Piedras, Puerto Rico at the age of eight and moved back to New Jersey when he was 15…parents are Rafael and Elizabeth Rosa…enjoys playing basketball in his free time.