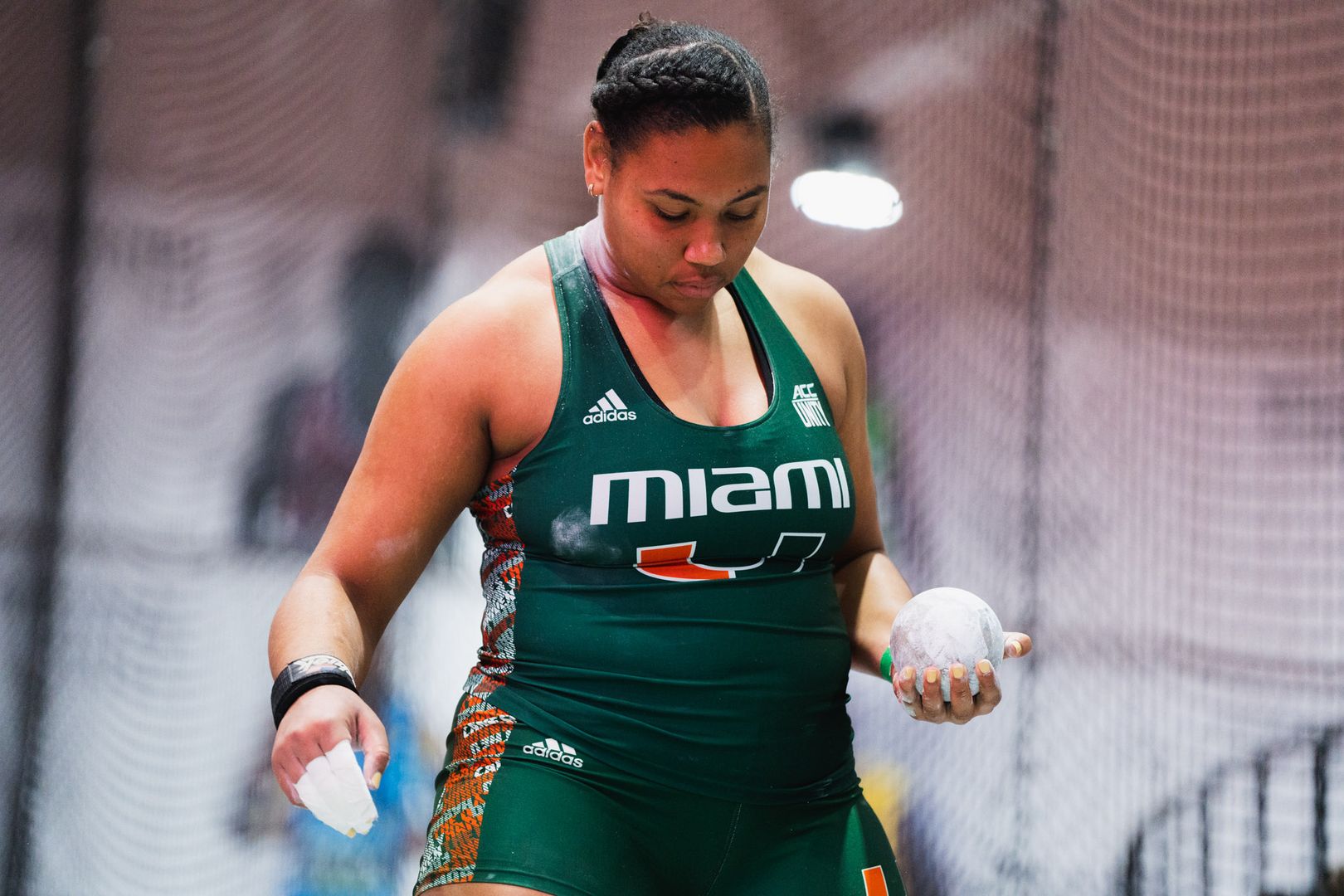 The day started off on the right foot with the women’s weight throw, where fifth-year Hannah Sophia-Hall captured second place with a score of 18.97. Later in the day, Sophia-Hall carried her momentum into the women’s shot put, placing second and scoring a 16.72 on her second attempt.

The men’s weight throw followed shortly after, where graduate student Décio Andrade earned another first-place finish, scoring 21.13 on his last attempt and giving the hurricanes the first win on the day. Andrade has now placed first in the opening two meets of the 2023 indoor season.

Coming off a hot start to the indoor season in Louisville, Sincere Rhea took third this time in the men’s 60m hurdles, following Louisiana State’s Matthew Sophia and Clemson’s Giano Roberts. However, the win wasn’t easy for Roberts. All three hurdlers scored a 7.73 in a photo finish for the top spot, with the final times being 7.723, 7.724, and 7.727 respectively.

Freshman Gabriella Grissom begins to build her foundation for the hurricanes in the women’s 600y dash, earning a time of 1:21.21 and placing third in the event. Fellow freshman Enrique Borrego was up next in the men’s mile run, where he posted a time of 4:13.78, giving the distance runner a second-place finish.

Another highlight of the day came from junior Emma Maurel in the women’s 800m, where she earned a first-place finish posting a time of 2:08.76, beating out Clemson’s Brynne Summer and Louisiana State’s Lorena Rangel Batres. In the men’s 800m, the dynamic duo of Ayman Zahafi and Oskars Bambals placed second and third. Zahafi with a time of 1:49.00 and Bambals right behind him at 1:49.37

The jumpers quickly got to work in Lubbock, where sophomore Ashley Moore bested her competition in the women’s triple jump with a leap of 12.94. Then, Russell Robinson, coming off setting a new program record in Louisville with a score of 16.13m, set the program record once again in the men’s triple jump with a score of 16.36 on his very first attempt.

“He trusts the process. What allows Russ to compete week in and week out is he trusts the process and plan we put in place for him ever since he got to the University of Miami. He shows up to work every day, puts his nose down, and grinds away. I’m really looking forward to seeing how he continues to develop this indoor season and moving forward to ACC and NCAA championships later this spring,” Coach Rob Jarvis explains when asked about Robinson’s continued success.

Freshman distance runner Elle Mezzio earned the hurricanes another top-three finish on the day in the women’s 3000m, with a score of 10:24.89, placing third. In the men’s 3000m, Austen Cannon placed second running a time of 8:35.76.

The final top-three finish for the hurricanes came from the women’s 4×400 relay team, where Gabriella Grissom, Moriah Oliveira, Sanaa Hebron, and Blanca Hervas placed third with a combined time of 3:35.84.

The hurricanes will now have a week off, then travel to Albuquerque, New Mexico to compete on February 3rd and 4th. For staying connected with the Miami Hurricanes track and field team, make sure to follow @canestrack on Instagram, Twitter, and Facebook.