Senior Haley Cavinder recorded her second 20-point outing of the season, pouring in a team-best 21 points to go along with nine rebounds and six assists. Cavinder also knocked down five of Miami’s eight 3-pointers in the contest.

“Haley, the entire the game, was just a monster. She was the most competitive person on the court,” head coach Katie Meier said. “She was demanding from her teammates and I think she’s ready to get some more ACC wins for Miami.”

On her birthday, sophomore Jasmyne Roberts tallied a career-high 15 points and nine rebounds, narrowly missing her first career double-double. Senior Lola Pendande rounded out the trio of Hurricanes in double-figures with 18 points on 7-of-10 shooting, setting a new scoring high as a Hurricane.

“Jas, on her birthday, gave us a present. I thought she was steady, confident and reliable in big moments,” Meier said. “She played like a veteran. She took big shots for us and made big plays on the defensive end.” 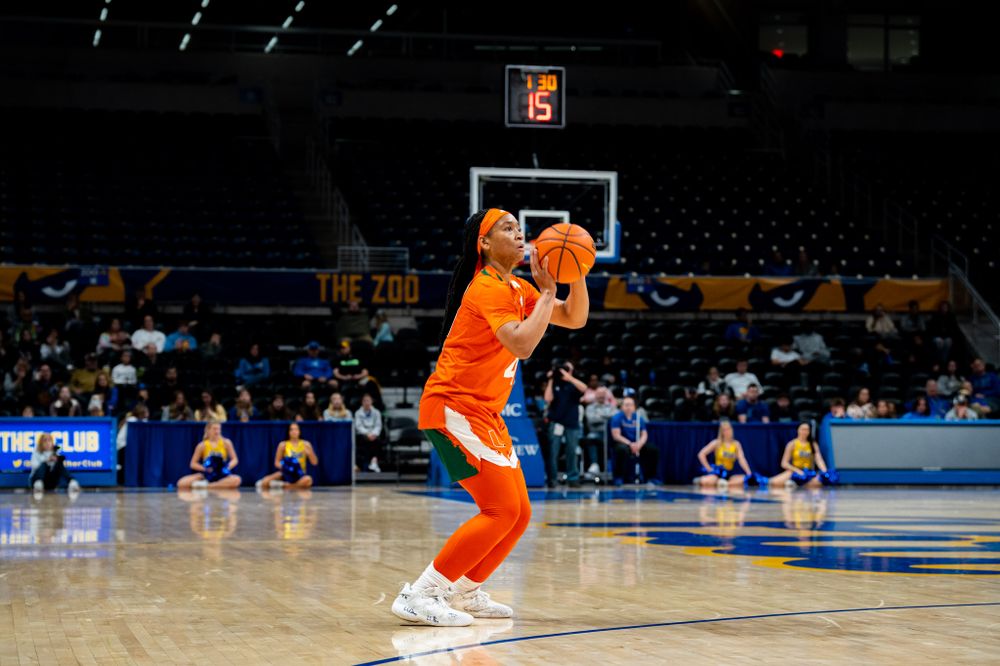 The Hurricanes were clicking on offense from the jump, shooting 56.3 percent from the field in the first quarter. Haley Cavinder knocked down her first three shots of the game, all of which were from beyond the arc to put Miami ahead, 13-4. Four other Hurricanes scored in the first 10 minutes to give Miami a 21-14 lead after one.

The lead quickly evaporated as Pitt scored the first seven points of the second quarter to tie the game at 21. Miami responded with a 9-0 run in the middle of the frame capped by Haley Cavinder’s fourth three of the game to hold a 36-32 advantage going into halftime.

The teams went basket for basket in the third quarter with Miami taking the quarter, 17-16, thanks to a six-point quarter from Pendande.

Miami secured its first double-digit lead since the first quarter on a fastbreak jumper by Roberts at the 7:28 mark in the fourth. Roberts continued to work, tallying 10 of her 15 points in the final 10 minutes.

.@roberts_jasmyne hits our seventh three of the game!

As a team, the Hurricanes shot 66.7 percent in the fourth quarter to secure their first ACC road win of the season.

The Hurricanes return to the Watsco Center for the first of a pair of games against top-10 opponents, taking on No. 6 North Carolina at 6 p.m. The game will air on ACC Network Extra.