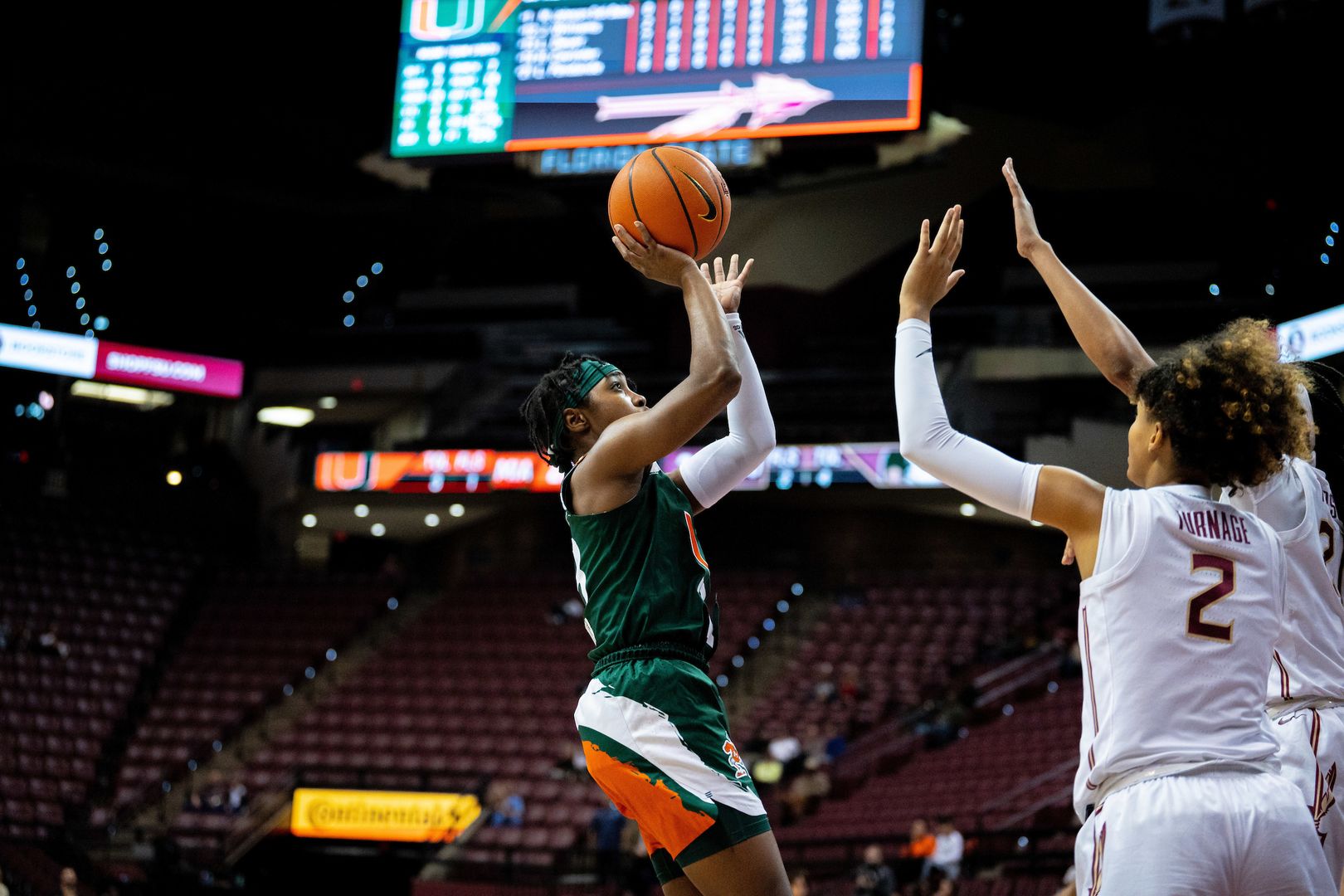 TALLAHASSEE, Fla. – Two Hurricane scored 20-plus points for the first time since 2019, but the University of Miami women’s basketball team (7-5, 0-1 ACC) could not overcome the Florida State Seminoles (12-2, 1-0), falling, 92-85, Wednesday afternoon at the Donald L. Tucker Center in Tallahassee, Fla.

“I thought we showed a very gritty attitude. We were a very connected team today and it was a heck of a challenge,” head coach Katie Meier said. “Florida State is one of the high-octane offenses in the country and, obviously, our defense let us down tonight. But it was also a game where we had some special performances.” 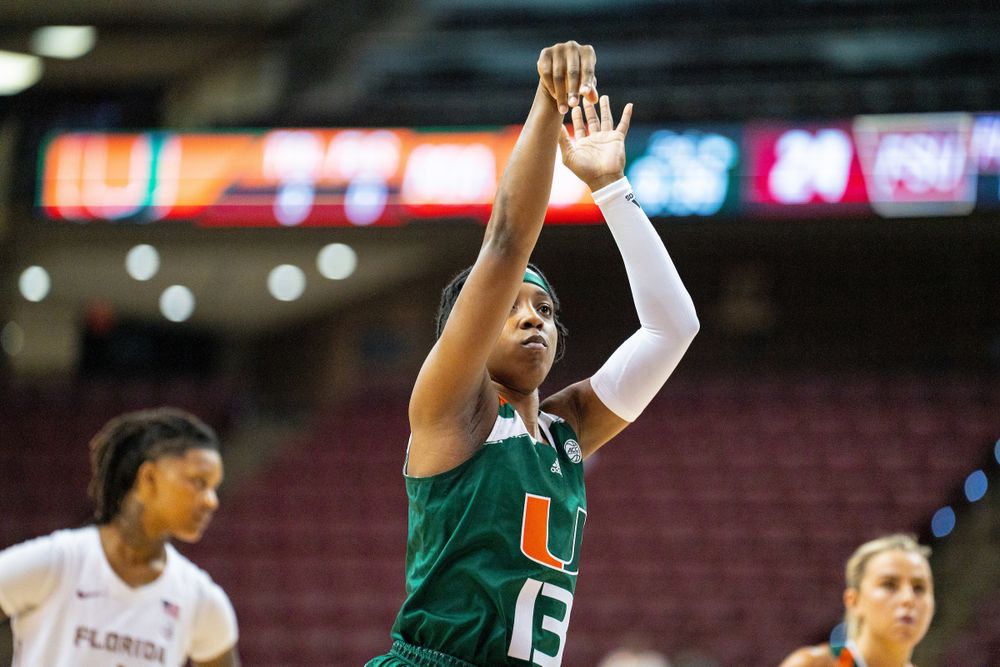 Dwyer and Harden’s efforts marked the first time since Nov. 17, 2019 that two Hurricanes scored 20-plus points in a game.

”I thought Lashae Dwyer was incredibly special and Destiny Harden, who was a little bit injured, played through the pain and was a real leader and hero for the team along with Haley Cavinder,” Meier said.

Senior Haley Cavinder and sophomore Ja’Leah Williams joined the pair in double-digits with 17 and 11 points, respectively. Cavinder added a team-best eight rebounds to come up just short of the double-double. 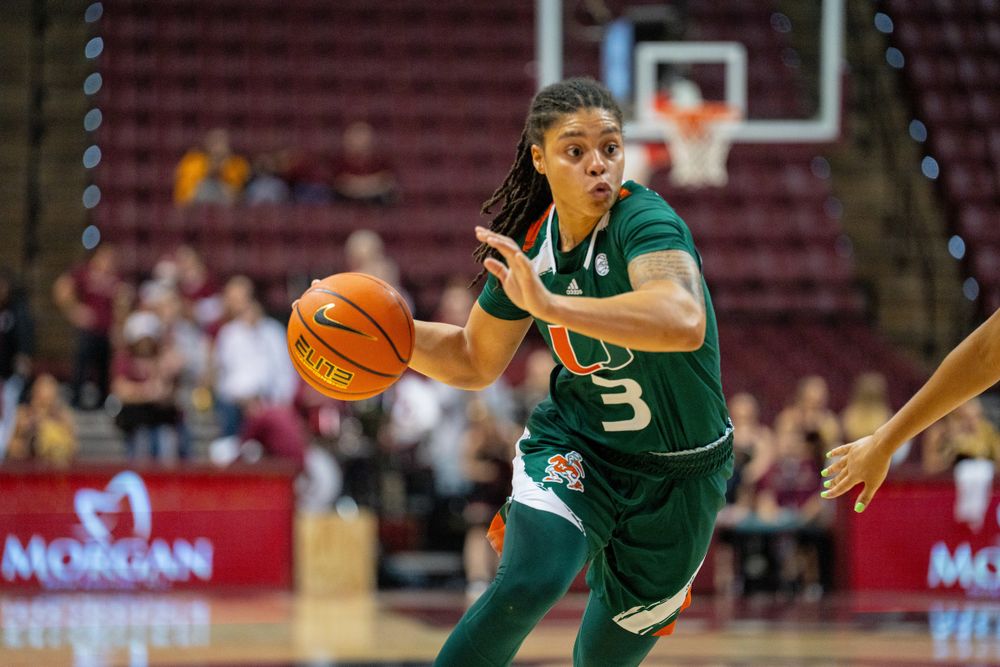 Florida State controlled much of the first quarter, taking a 12-point lead halfway through the frame thanks to a 3-of-4 shooting effort from 3-point range. The Seminoles knocked down their fourth three of the first quarter in the final minute to hold a 24-13 advantage after the first 10 minutes.

The Seminoles continued to work in the second, extending their lead to 14 in the first three minutes of the quarter. However, the Hurricanes locked down on defense and put together six stops on seven Florida State possessions.

On offense, Miami embarked on a 12-2 run to pull to within four. Harden made it a two-point game with a trail 3-pointer at the 52 second mark, but Florida State responded with a three of its own to take a 38-33 lead into halftime.

Florida State opened the second half on a 7-0 run to pull ahead by 12, but Harden knocked down her second three of the game to spark a similar 7-0 run for the Hurricanes. Williams and Haley Cavinder added 3-pointers of their own to highlight Miami’s 4-of-6 effort from beyond the arc in the third.

The Seminoles outscored the Hurricanes 15-5 in the first five minutes of the final quarter to extend its lead to 16 with 4:43 to go. Dwyer took over for Miami after that, scoring 10 points over the next three minutes to make it a seven-point game at the 1:42 mark in the frame.

However, the clock ran out on the Hurricanes’ rally and Florida State sealed the 92-85 result with free throws down the stretch.

Miami hosts Notre Dame for its first home ACC game of the season on Dec. 29. The Hurricanes will honor the hometown heroes of Miami for Heroes Night at the Watsco Center. Tipoff is set for 6 p.m. and the game will air on ACC Network.