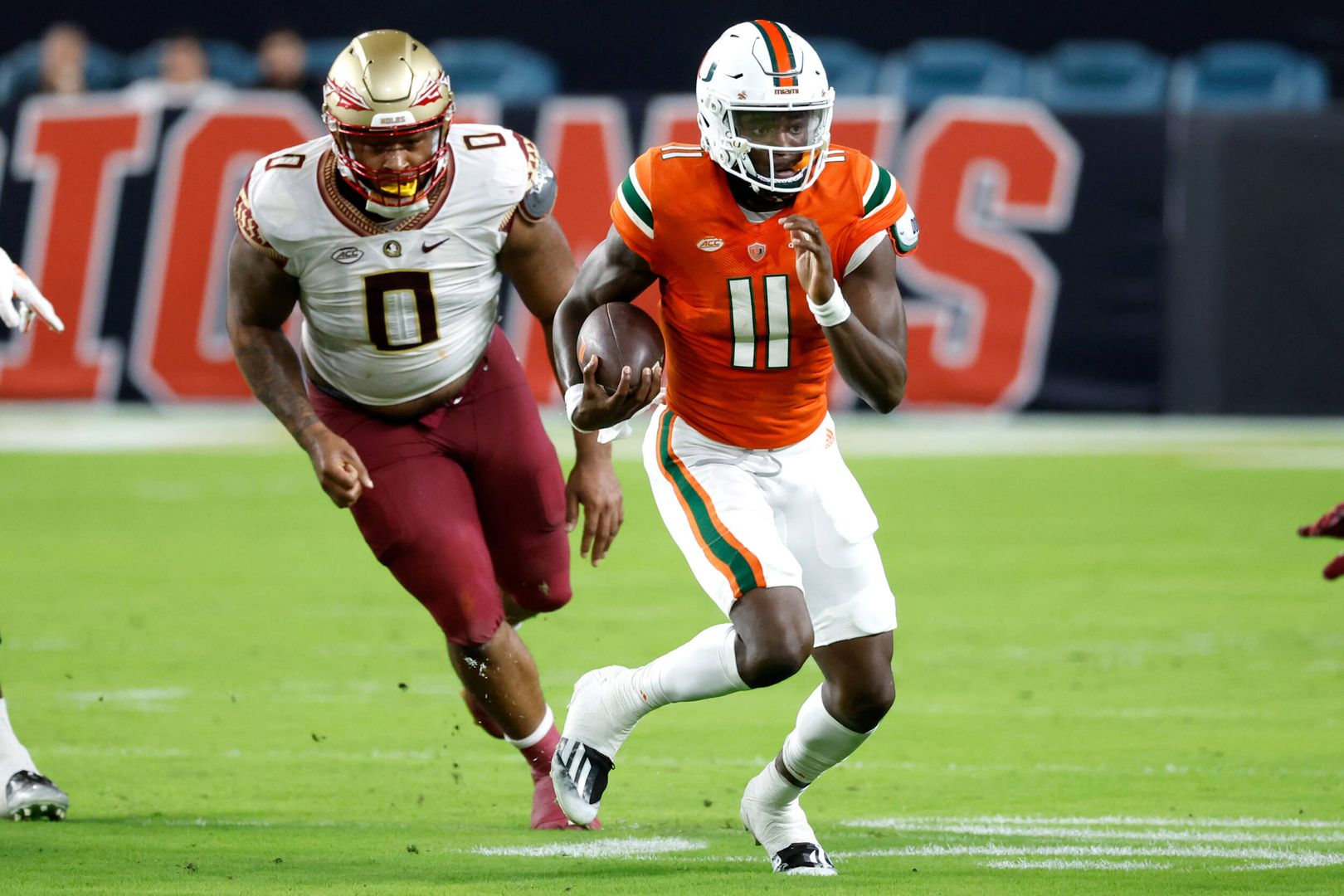 MIAMI GARDENS, Fla. – It was a raucous Saturday night under the lights at Hard Rock Stadium.

The Miami Hurricanes hosted the Florida State Seminoles in an atmosphere befitting of the 67th installment of one of college football’s greatest rivalries.

But from the jump the Seminoles possessed too much firepower, racing out to an early lead, quieting the sellout crowd, and ultimately defeating the Canes 45-3, their first road win in the series since 2016.

After the Canes cut the Seminoles’ initial lead to 7-3, Florida State scored 38 consecutive points. The Seminoles built that cushion with a balanced offensive attack, amassing 229 yards on the ground and 225 yards in the air, while averaging seven yards per play.

“Obviously a poor performance by our program,” head coach Mario Cristobal said. “As a head coach, you have to take responsibility for that. Our entire program has to take it head-on and go back to work, and build. That’s where we are. We all have work to do.”

Tyler Van Dyke returned at quarterback for Miami after sitting out last week’s Virginia game but departed in the second quarter. Jacurri Brown and Jake Garcia both saw action in his absence, but the Canes combined for just 62 total passing yards. Brown added 54 yards rushing.

Florida State quarterback Jordan Travis completed 10 of 12 passes for 202 yards with three touchdowns and one interception. Running back Trey Benson rushed for 128 yards and two scores. The Seminoles forced four turnovers and held the Canes to just 188 total yards.

The Seminoles got the ball to start the evening and the Canes appeared to force a quick three-and-out but safety James Williams was flagged for pass interference on 3rd and 11. Two plays later Travis hit wide receiver Ontaria Wilson deep for 56 yards and Florida State had a 7-0 lead just 1:38 into the game.

Miami marched down to the Seminoles 30 on its first possession but Van Dyke’s third-down throw to Restrepo was just out of reach. The Canes settled for a 49-yard field goal by Andy Borregales, who cut the lead to 7-3.

The Seminoles struck back on their next snap as Benson rumbled 42 yards to the Miami 33. Six plays later safety Kamren Kinchens picked off Travis in the end zone, but cornerback Tyrique Stevenson was flagged for pass interference. The penalty gave Florida State first and goal and Travis found linebacker DJ Lundy from two yards out, pushing the Seminoles’ lead to 14-3.

Florida State got the ball back after a Miami three-and-out and again crossed midfield. But when Travis looked deep again this time Ivey made a diving interception at the two-yard line. Miami couldn’t move the sticks and the Seminoles got the ball back at the Canes 39. Benson took care of the rest, covering all 39 yards on his next three carries, capping it with a 13-yard touchdown to give Florida State an 18-point lead.

Van Dyke took the first two snaps of the next drive before Garcia relieved him, scrambling 13 yards before the Canes were forced to punt again. The Seminoles managed two first downs before trotting out their punting unit and pinning the Canes back at their two-yard line.

Three plays later Florida State cornerback Greedy Vance picked off Garcia and ran it back to the Miami seven-yard line. Benson bulled in from a yard out on third and goal and the lead was 25 points. Ryan Fitzgerald tacked on a 41-yard field goal on the last play of the half for a 31-3 lead.

In the third quarter Brown engineered a drive from the Miami 3 all the way to Florida State’s two-yard line, highlighted by Knighton’s 45-yard run. But the Seminoles recovered a fumbled snap on third and goal to kill the drive.

The Seminoles responded with another touchdown drive, this one capped by an eight-yard scoring toss from Travis to tight end Camren McDonald. One play into the fourth quarter Florida State’s lead was 38-3. Running back CJ Campbell added a three-yard touchdown run late to cap the scoring.

The Canes next head to Atlanta to face Georgia Tech, their first road meeting with the Yellow Jackets in four years. Kickoff is 3:30 p.m. next Saturday on RSN.

Mario Cristobal meets with the media after Miami's game against Florida State.