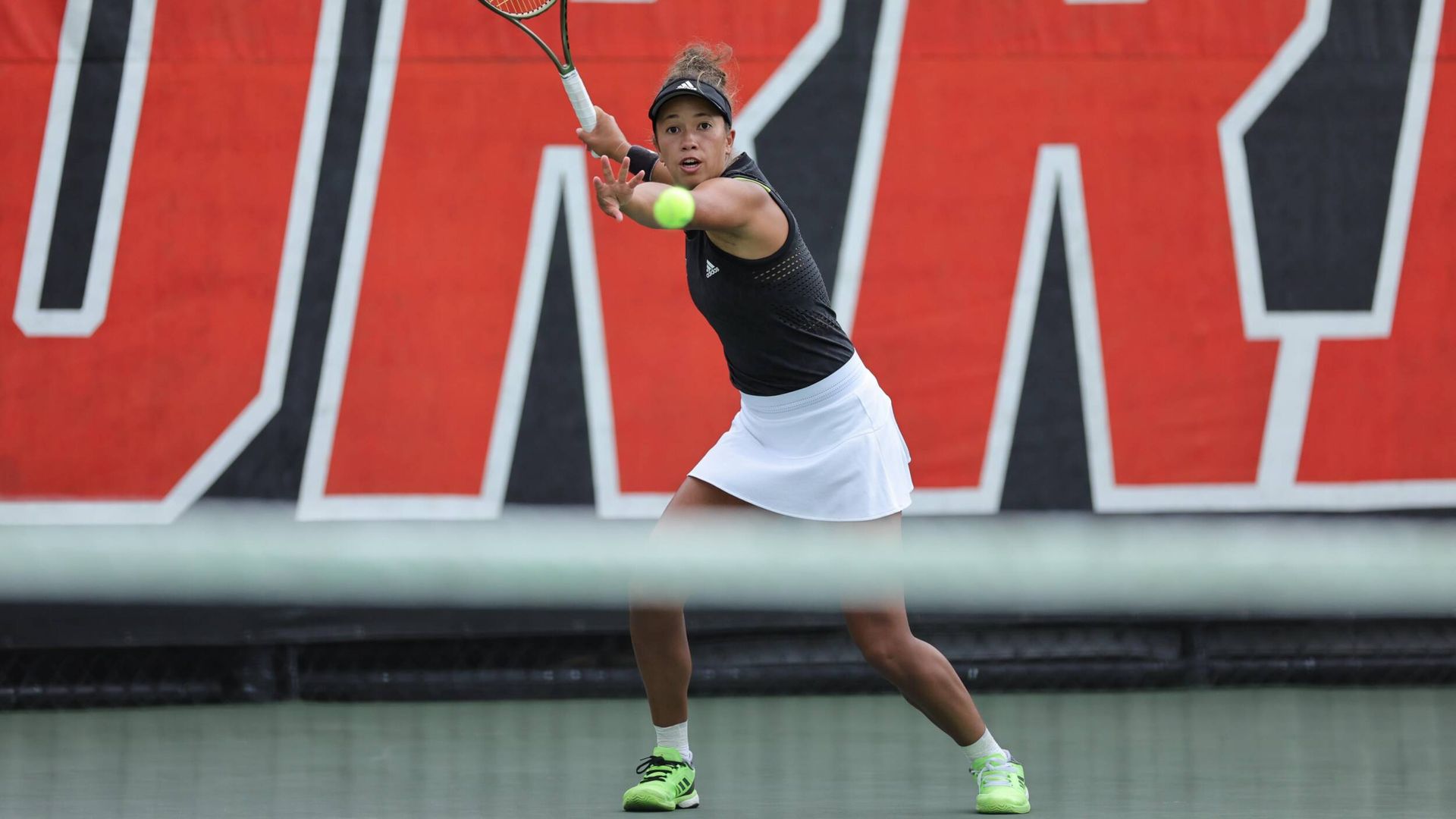 CORAL GABLES, Fla. – Initially scheduled for 5 p.m., the University of Miami women’s tennis team’s Friday match against No. 71 Syracuse got moved up to 3 p.m. due to impending rain. When the weather hit early, the match got moved back to 5:30 p.m.

The start time, however, did not matter one bit to the homestanding Hurricanes, who won every single completed set on the night.

No. 14 Miami (15-4, 9-3 ACC) cruised to its second consecutive sweep, shutting out the Orange, 4-0, during a match that featured a steady, light drizzle at the Neil Schiff Tennis Center.

“Honestly, I think everybody did well,” Miami head coach Paige Yaroshuk-Tews said. Under the conditions, I just think everybody was playing good tennis and had good energy. That’s what we’ve been focusing on all week.”

Miami jumped out to a fast start in doubles, as fourth-year junior Daevenia Achong and fifth-year senior Eden Richardson, together ranked No. 28, needed just 18 minutes to win their match. The duo logged a dominant 6-0 victory over No. 86 Shiori Ito and Sofya Treshcheva.

Freshman Tatyana Nikolenko and third-year sophomore Maya Tahan clinched the doubles point for the Hurricanes by tallying a 6-4 triumph against No. 40 Miyuka Kimoto and Polina Kozyreva. It marked their first ranked win as a pair and the first ranked victory as a collegian—in singles or doubles—for Nikolenko.

The Hurricanes won all six opening sets in the singles, dropping three-plus games in only two of them, to take full command of the match.

Tahan took the first 10 games of her match versus Kozyreva and eventually closed out a 6-0, 6-1 decision to double the lead. Just moments later, No. 31 Achong finished off an impressive 6-2, 6-0 decision against Kimoto to make it 3-0.

No. 80 Pfennig, with her parents on hand all the way from Germany, provided the clinching point, as she took down Zeynep Erman, 6-1, 6-1, to give Miami the 4-0 victory.

The final three matches were abandoned, with the Hurricanes ahead in each. No. 50 Richardson led Kanapatskaya, a reigning ITA All-American, 6-2, 4-2. Meanwhile, Boch-Collins had a 6-4 advantage on Fonte and Nikolenko held a 6-3, 1-3 edge over Ito.

Friday marked the 159th shutout victory of Yaroshuk-Tews’ 21-year head coaching career, including the 102nd since 2009 and the fifth this year. It also improved the Hurricanes to 13-1 all-time versus Syracuse, including 9-0 at home.

“Just happy [with the win],” the two-time ITA Southeast Region Coach of the Year said. “We’ve got to get these two in this weekend and get ourselves playing good tennis leading up to the ACC tournament. So, I think we did a good job tonight.”

The Hurricanes wrap up regular season play Sunday at 11 a.m. when they host Boston College, with Richardson set to be honored beforehand during Senior Day ceremonies.