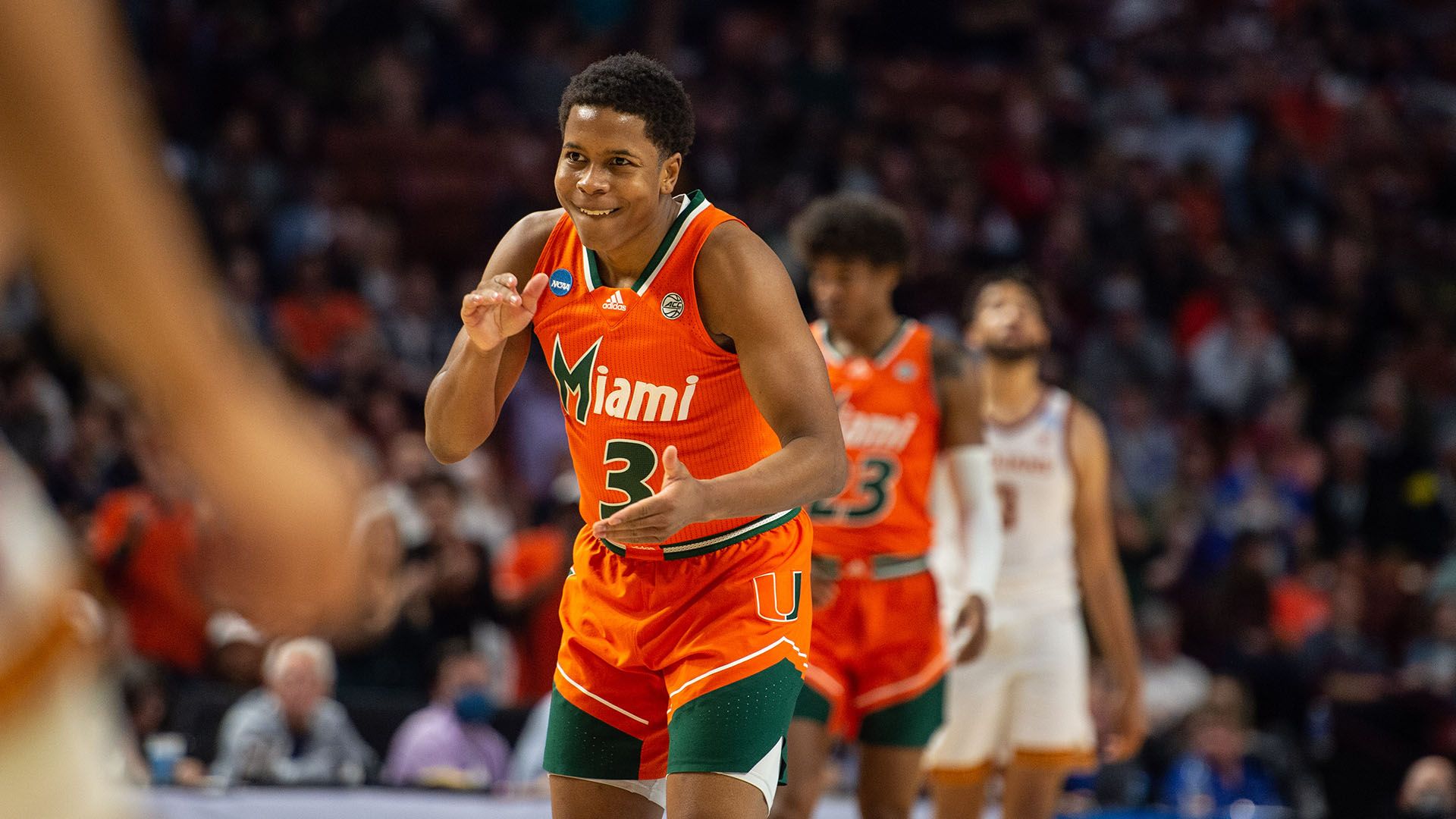 The No. 10-seeded Hurricanes took a 13-point first-half lead on the Trojans, ranked No. 21/22, and withstood a 17-point turnaround that saw USC take a four-point second-half edge. With the score even and just three seconds to go, sixth-year redshirt senior guard Charlie Moore calmly sank a pair of free throws to give Miami (24-10, 14-6 ACC) its first postseason victory since 2016.

Third-year sophomore guard Isaiah Wong scored a game-high 22 points, including each of the first 13, for the Hurricanes at Bon Secours Wellness Arena.

“We played a great first half, got up by 11 [at the break]. We forced turnovers. We played exactly like we hoped we’d play,” Miami head coach Jim Larrañaga said. “And then in the second half, Southern Cal made some adjustments. They actually changed their starting lineup to start the second half. They got off to a great start and they ended up taking the lead, but our guys never give up and they kept plugging away. We had some guys off the bench who stepped in and gave us quality minutes. We shot 1-for-14 from three, but still won the game because we took care of the basketball. We only had three turnovers in a 40-minute game; that really helps.”

Wong scored all of the Hurricanes’ 13 points through eight-plus minutes, shooting 5-of-8 from the floor and 3-of-4 at the line while his teammates began 0-of-8 on field goals. The Trojans, however went on an 8-3 run to take a 14-13 edge, their first lead, with exactly nine minutes on the clock.

Despite shooting 0-of-8 from 3-point range through 20 minutes, its first half of the year without a long-range make, Miami held USC to a 29.7 percent clip (8-of-27) from the floor and forced 12 turnovers, while committing just one.

USC responded with three points in a row, going in front, 54-53, with 4:51 remaining, but then the Hurricanes began to retake control. They went on a 12-4 run, capped with six straight points in 68 seconds to build a seven-point edge, 65-58, with 44 ticks left after a pair of free throws by freshman guard Bensley Joseph.

The Trojans once again responded, as senior guard Drew Peterson hit back-to-back 3-pointers, sandwiched around a Miami turnover to trim the deficit to one, 65-64, with 25.3 seconds left. Following a free throw by sixth-year redshirt senior forward Sam Waardenburg to double the lead a second later, Peterson leveled the score at 66 with 14.2 seconds left, capping a personal 8-1 run in just 20 seconds.

At the other end, Moore drove to the rim, got fouled with three ticks to play and hit both his free throws. Peterson’s last-second half-court shot missed the mark, sending the Hurricanes into celebration.

“All is well that ends well. I’m just so happy,” Larrañaga said. “When you get guys like Charlie Moore and Jordan Miller who transfer in, you just hope that it’s a good experience for them. The other guys who have been here for a long time, they know what our program has been about.”

Wong, who fouled out with 2:07 to go, scored his game-best point total on a 7-of-12 clip from the field and an 8-of-9 mark at the stripe, good for the fifth-most made free throws in an NCAA Tournament game in program history.

Moore finished with 16 points, shooting 5-of-11 from the floor and 5-of-6 at the line, setting season highs in both makes and attempts in the latter category. He added a team-best five assists and four steals to co-lead all players and committed just two turnovers.

McGusty had 12 points and a team-high five boards, while Waardenburg set a career high with four blocks, all in the first half, to match the program’s NCAA Tournament single-game record. Fourth-year junior guard Jordan Miller matched Moore with four steals, as both tied for the top mark by a Hurricane in NCAA Tournament play.

Peterson paced USC with 17 points, while freshman guard Reese Dixon-Waters had 16 on 5-of-6 shooting off the bench. Junior forward Isaiah Mobley, the Trojans’ leading scorer, logged just 11 points, as Miami held him to 3-of-11 shooting, including a 0-of-6 mark in the first half, but he did notch a game-best eight assists to tie the NCAA Tournament record by a Miami foe. Redshirt senior forward Chevez Goodwin added 10 points in his home state of South Carolina.

That led to a 22-4 edge in points off giveaways, with many of those coming off Miami’s 12 steals to tie its program record in the NCAA Tournament. Miami also had a 3-0 edge on the offensive glass in the second half USC logged a 6-0 mark in the first.

In addition, the Hurricanes shot 19-of-25 (76.0 percent) on free throws to place top for in makes and attempts in program history in NCAA Tournament action, while USC was only 9-of-15 (60.0 percent).

Up next for Miami is a matchup with second-seeded Auburn, ranked No. 8/7, Sunday in the NCAA Tournament Round of 32. The game time and TV designation are to-be-determined.

MIAMI HURRICANES POSTGAME NOTES
– The Hurricanes moved to 1-2 all-time against USC, including 1-1 at neutral sites, 1-0 in the NCAA Tournament and 1-0 in Larrañaga’s tenure.
– Miami improved to 9-10 all-time in the NCAA Tournament, including 5-4 under Larrañaga, 2-3 as a lower seed, 1-0 as the No. 10 seed, 1-1 as a double-digit seed, 2-1 versus seventh seeds, 3-6 against single-digit seeds, 2-0 in 7/10 games, 1-0 in South Carolina, 6-5 in openers and 1-1 against Pac-12 teams.
– Larrañaga, who entered the game with the 10th-most victories of any active Division I coach, is now 694-474 in 38 years as a head coach, including 224-140 in 11 seasons at Miami.
– Larrañaga now owns a 3-2 record against Pac-12 teams, all at neutral sites, in his tenure with the Hurricanes, including a 1-1 mark in postseason play.
– For the 25th time this season, Miami used a starting lineup of McGusty, J. Miller, Moore, Waardenburg and Wong.
– McGusty now has 1,208 points at Miami, passing Mario Bland (1996-2000) to take the No. 26 position on the Hurricanes’ all-time leaderboard as the 26th individual to reach 1,200 points.
– McGusty now has 593 points this year, passing Mike Wittman (1966-67) and Guillermo Diaz (2005-06) to enter the top 10 on Miami’s single-season leaderboard, checking in at ninth place with the second-most points in the last 30 years.
– With 1,150 minutes played in 2021-22, McGusty entered the top 10 on the program’s all-time leaderboard, passing multiple players to check in at ninth.
– With 60 steals this season, J. Miller jumped from co-No. 13 to co-seventh on the program’s single-season leaderboard, alongside Vernon Jennings (1998-99), marking the eighth time a Hurricane has logged 60-plus.
– Wong has now played 1,142 minutes this season, good for co-No. 10 on Miami’s single-season list, alongside Durand Scott (2012-13).
– Miami has 24 wins in a season for the fifth time in program history, including the fourth in Larrañaga’s 11-year tenure.
– The Hurricanes moved to 23-4 this season when scoring 65-plus points.
– Miami now has 13 wins in 2021-22 in games it trailed during the second half.
– Friday marked the 14th time this season Miami has posted double-digit steals, including the 11th in the last 20 outings.
– Waardenburg’s four blocked shots tied the figure by Kamari Murphy on 3/17/16 against Buffalo for the program record in NCAA Tournament play.
– J. Miller and Moore logged the fourth and fifth four-steal performances by a Hurricane in the NCAA Tournament, matching the record co-held by Angel Rodriguez on 3/19/16 versus Wichita State, Kevin Norris on 3/13/98 against UCLA and Johnny Hemsley on 3/12/99 versus Lafayette.
– McGusty’s 18 field-goal attempts marked the third-highest total in an NCAA Tournament game in program history, behind only the 21 from Tim James on 3/14/99 against Purdue and the 19 by Jack McClinton on 3/21/08 versus St. Mary’s.
– Wong is the fifth player in program history to make at least eight free throws in an NCAA Tournament game.
– The Hurricanes’ 12 steals matched their NCAA Tournament record mark previously recorded on 3/13/98 against UCLA.
– Miami’s 19 made free throws tied for the fourth-most makes in a single NCAA Tournament game in program history.
– The Hurricanes’ 25 free-throw attempts place fourth on the program’s NCAA Tournament single-game leaderboard.
– With 14 assists, Miami tied for its fourth-highest total ever in an NCAA Tournament affair.
– Miami’s four blocked shots matched the fourth-highest single-game total in NCAA Tournament action in program history.
– Mobley’s eight assists tied the record held by Texas’ DJ Augustin on 3/23/08 and Loyola Chicago’s Ben Richardson on 3/15/18 for the most by a Miami opponent in the NCAA Tournament.
– The Trojans’ 48.0 field-goal percentage is the fifth-highest mark Miami has ever conceded in the NCAA Tournament.
– USC’s nine made 3-pointers matched the fourth-highest total for a Hurricane foe in NCAA Tournament competition.
– The Trojans’ 45.0 3-point percentage is the fourth-best by a Miami foe in an NCAA Tournament contest.
– USC pulled down 38 rebounds to tie the fourth-highest total the Hurricanes have ever allowed in the NCAA Tournament.
– With 18 assists, the Trojans equaled the second-highest mark ever by a Miami opponent in the NCAA Tournament, behind only the the 19 by Loyola Chicago on 3/15/18.
– The Hurricanes three turnovers set a season low, while the 18 giveaways at the other end matched the fourth-highest total by Miami this year.
– The last time Miami committed just three turnovers in a game was on 2/22/14 against Boston College, with this just the third time in Larrañaga’s 11-year tenure it had fewer than four giveaways in a contest.
– The Hurricanes one made 3-pointer and 7.1 percent 3-point clip both set season lows, passing the respective prior marks of two (11/16/21 at Florida Atlantic) and 16.7 percent (3-of-18 on 3/5/22 at Syracuse).
– The last time Miami did not make multiple 3-pointers in a game was on 12/8/20 versus Purdue.
– USC’s 20 first-half points tied for the second-fewest Miami has allowed in a frame this season, trailing only the 18 in the second half against Florida State on 1/22/22 and matching the 20 at Florida Atlantic on 11/16/21.
– The 12 first-half turnovers by the Trojans marked the third-highest total in a session by a Miami foe this year, behind the 13 from Duke in the first half on 1/8/22 and the 15 from Florida State in the second half on 1/22/22.
– Miami posted a 12-0 edge in points off turnovers in the first half, but USC had a 7-0 cushion in second-chance points.
– The Hurricanes did not get their first offensive rebound of the game until just 9:40 remained in the second half and did not make its first 3-pointer until only 5:47 remained.
– Wong, who surpassed 2,750 minutes played at Miami, recorded his 23rd 20-point performance, including his ninth this season.
– Wong scored in double figures for the 62nd time, including the 29th in 2021-22.
– Wong fouled out for the second consecutive game after never previously doing so once in his career.
– Moore tallied double-digit points for the 81st time, including the 24th this year.
– Moore posted five-plus assists for the 53rd time, including the 16th this season and the seventh in a row.
– McGusty, who surpassed 1,800 points, 650 made field goals and 4,000 minutes played as a collegian, scored in double figures for the 95th time, including the 67th at Miami and 32nd this season.