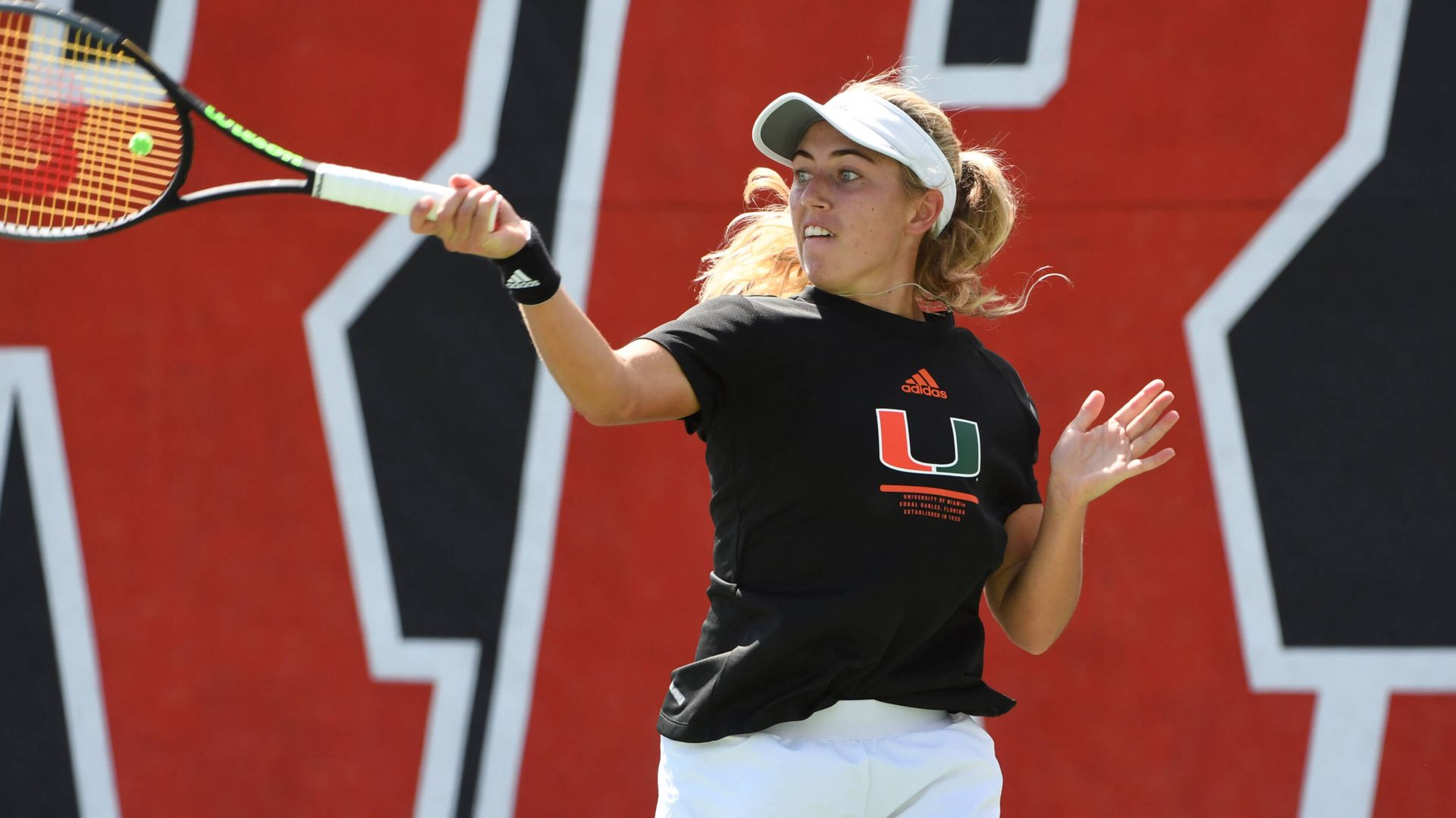 After No. 14 Miami (8-1, 3-0 ACC) took the doubles point, the two sides exchanged singles matches back and forth before fifth-year senior Eden Richardson clinched it in a third set on Court 1 at the Wake Forest Tennis Center. The victory marked the Hurricanes’ third over a top-20 foe in their last five outings.

“We played ball tonight. The conditions and being on the road, didn’t seem to faze us,” Miami head coach Paige Yaroshuk-Tews said. “We stayed coachable and fought our tails off. I’m proud of this crew.”

The Hurricanes jumped on the board first by taking a pair of doubles victories. The first came in dominant fashion, as sophomores Audrey Boch-Collins and Isabella Pfennig rolled past Saby Nihalani and Peyton Pesavento, 6-1

In a top-40 showdown on Court 1, the Wake Forest (8-4, 0-1 ACC) duo of Anna Brylin and Brooke Killingsworth, ranked sixth nationally, won back-to-back games to close within 5-4. However, Miami’s No. 40-ranked pair of Richardson and fourth-year junior Daevenia Achong closed out the match, 6-4, to tally a top-10 decision and give their team the opening point.

The remaining contest was played out, with the Demon Deacons’ Samantha Martinelli and Cassie Wooten taking the final three games against third-year sophomores Diana Khodan and Maya Tahan, ranked No. 38, to earn a 6-3 win.

Miami won four opening sets in singles, but Wake Forest took the first match, as Martinelli defeated Tahan, 6-4- 6-1. Within minutes, No. 67 Achong put the Hurricanes back in front after finishing off a 6-2, 6-2 triumph versus Anna Campana.

Both remaining matches went to a third set after Wake Forest recorded a split in each. The Demon Deacons took the first of them, as Killingsworth edged freshman Tatyana Nikolenko, in her collegiate debut, 4-6, 6-2, 6-4.

All eyes then turned to Court 1, where No. 81 Richardson held a 5-1 lead on No. 44 Campana after taking five straight games. The stretch included rallying from a 15-40 deficit in the fourth game.

Campana responded by taking back-to-back games to pull within two, but Richardson slammed the door in the next game, finishing the night with a volley to earn a 6-3, 4-6, 6-3 decision and send her teammates streaming onto the court in celebration.

The victory extended Miami’s winning streak against the Demon Deacons to 19 in a row and upped their mark in the series to 23-1.

The Hurricanes are back in action Sunday at noon when they take on second-ranked NC State in Raleigh, N.C.