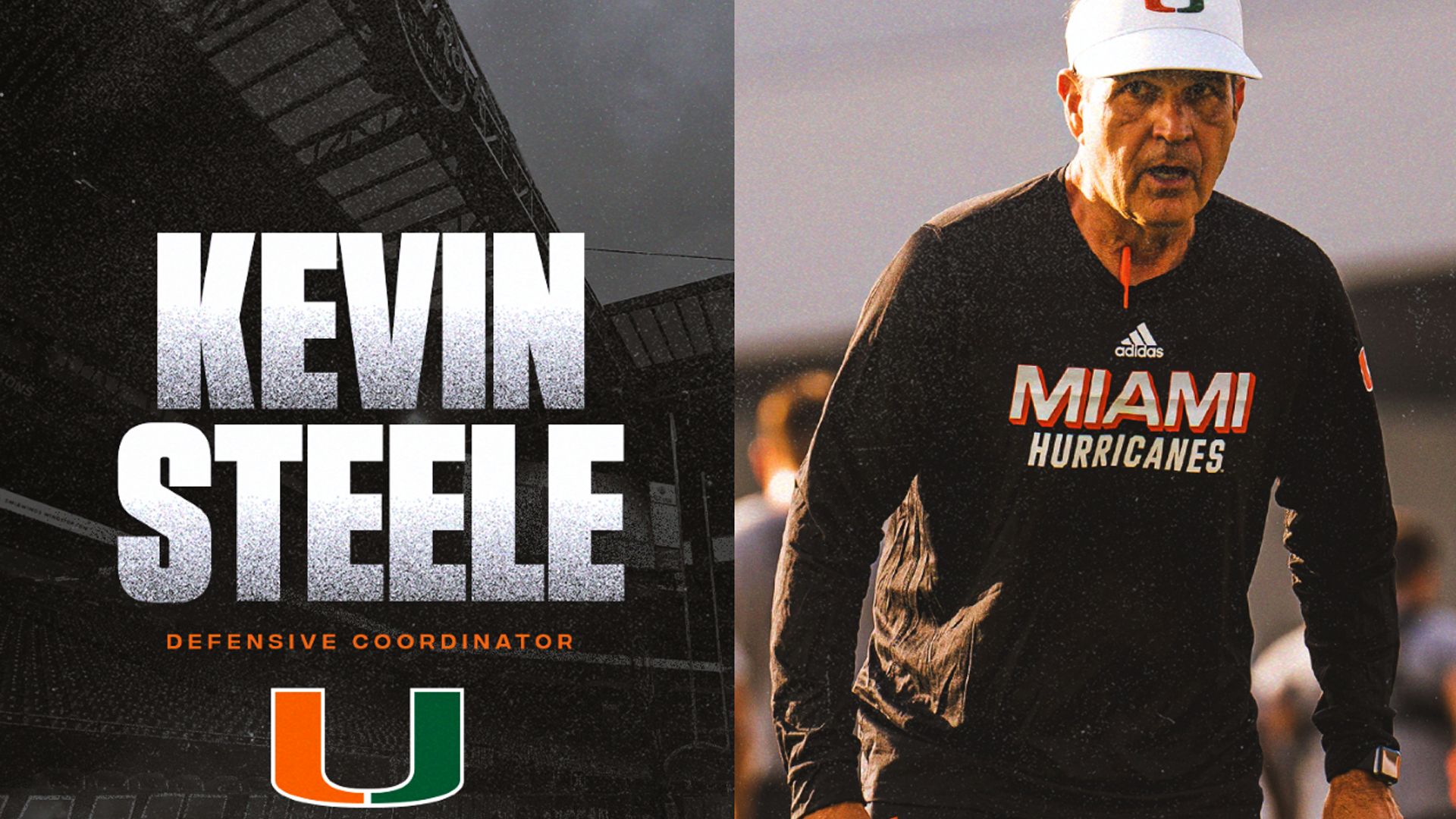 “A Miami Hurricanes defense should always be defined by its physicality and toughness, which are two traits of every Kevin Steele-coached defense,” Cristobal said. “Coach Steele has recruited, developed and produced at an elite level at every stop of his career, and I’m confident he will implement a defense that will make Hurricanes fans and alumni proud.

“Coach Steele will help elevate the culture of not only our defense, but our team as a whole, and I know he will make his impact felt on the identity of our program.”

During his five-season tenure as defensive coordinator at Auburn (2016-2020), Steele’s units ranked in the top 20 nationally in scoring defense four times while producing 14 NFL Draft picks and multiple first-rounders.

“My defensive philosophy fits what people desire to recapture at the University of Miami,” Steele said. “Philosophically, defense from the era I grew up in mirrors some of the things of the past teams here – it’s based on relentless effort, physical and mental toughness and tackling. We’ll never have a meeting where those three things are not talked about.

“There are things that are schematically important to any defense, whether we’re pressuring, playing press man coverage or whatever it might be. That’s all in a different library book. The first book you have to read is about relentless effort, physical and mental toughness, and tackling. If you do those three things on defense, you’re well on your way.”

In his final season at Auburn in 2020, Steele’s unit ranked fourth in the SEC in scoring defense while playing a 10-game conference slate. He also served as interim head coach for the Tigers’ Citrus Bowl contest against Northwestern.

In 2019, Auburn’s defense ranked eighth nationally in both red-zone and third-down defense, allowing only 19.5 points per game against a schedule that featured six 11-win opponents. The 2018 Auburn defense ranked 14th nationally in scoring defense (19.2) and allowed only nine rushing touchdowns. The Tigers ranked in the top 20 nationally in sacks (38) and tackles for loss (96) and were ninth nationally with three interception returns for scores.

The 2017 season saw Steele earn Broyles Award finalist honors as SEC West champion Auburn ranked 14th in total defense and 12th in scoring defense, allowing just 4.67 yards per play, which was eighth-best nationally. The Tigers ranked seventh nationally in scoring defense, 11th in red zone defense and 28th in total defense in his first season of 2017, an improvement of 43 spots over the previous season. The Tigers held eight consecutive opponents without a rushing touchdown, the longest season streak at Auburn since 1957.

Steele served as defensive coordinator and linebacker coach for LSU in 2015, going to Baton Rouge from Alabama, where he spent the 2014 season coaching the Crimson Tide linebackers and special assistant to the head coach. In 2013, he served as Alabama’s director of player personnel. Steele was the defensive coordinator at Alabama in 2007 and then held the same position at Clemson for three years from 2009-11. While at Clemson, the Tigers won the 2011 ACC title, their first since 1991. Steele’s 2010 Clemson defense led the ACC and ranked No. 13 nationally in points allowed, surrendering 18.8 points per game.

“I’ve been on the other sideline. It wasn’t like someone told me about the Miami Hurricanes defense – I’ve seen it. Up close and personal,” Steele said. “The responsibility of getting that back and letting our players understand what that is, and to live in that world, is really, really important. – but there’s also a responsibility to the ones who came before.”

Steele joined Florida State after serving as the head coach at Baylor from 1999-2002. Prior to overseeing the Big 12 program, Steele coached linebackers for the Carolina Panthers in the NFL from 1995-98. Under head coach Dom Capers, the Panthers reached the NFC Championship game in their second season (1996).

From 1989-94, Steele coached the linebackers under Nebraska legend Tom Osborne. During his six years in Lincoln, the Cornhuskers went 60-11, appeared in six bowl games, won four conference championships and captured the 1994 national championship with a 13-0 record.

The Dillon, S.C., native spent his freshman season at Furman before transferring to Tennessee, where he was a member of Majors’ squads. Steele was a student assistant coach in 1980 and then a graduate assistant the following year (1981) before being promoted to outside linebackers coach in 1982.

He served on Majors’ staff again from 1987-88 as defensive backs coach and was part of a 1987 Vols team that posted a 10-2-1 record, capping the year with a No. 14 national ranking and a Peach Bowl victory.

Steele and his wife, Linda, have a son, Gordon, and a daughter, Caroline. Gordon serves on the football coaching staff at South Alabama.