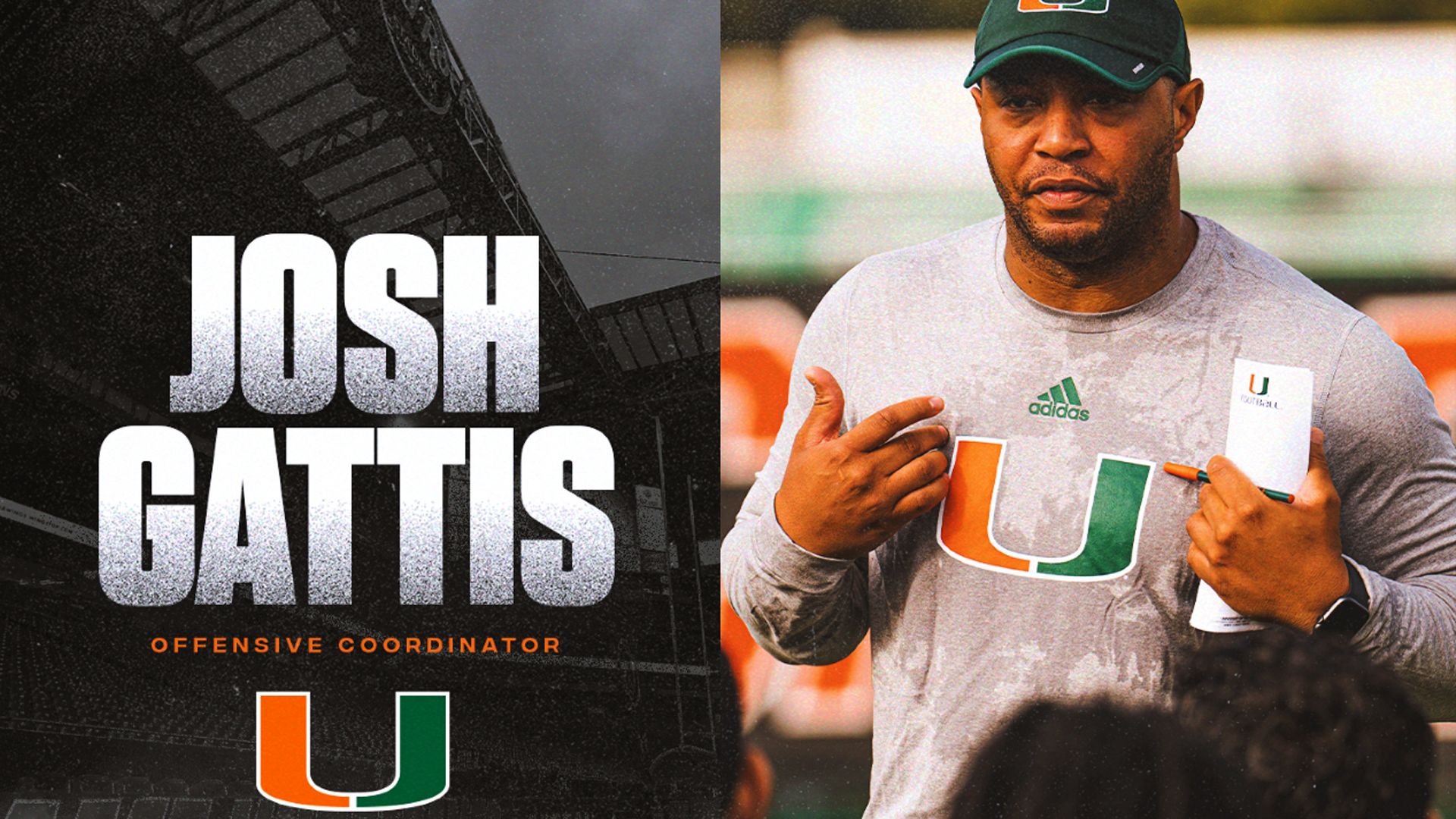 Gattis, the reigning Broyles Award winner as the nation’s top assistant coach, spent the previous three seasons (2019-21) at Michigan as offensive coordinator. He helped guide the Wolverines to their first-ever appearance in the College Football Playoff in 2021, leading an offense that ranked among the nation’s top-performing units.

“I’m fired up to add Josh Gattis to our staff as offensive coordinator,” Cristobal said. “Josh has championship experience and has achieved the highest honor as an assistant coach. He is a phenomenal human being, has exceptional acumen in player development and is a tremendous recruiter. His offenses are explosive and well-balanced, and his passion, ambition and energy will separate him as a difference maker for our offense and for our program.”

“It’s a tremendous honor to be here. I grew up in ACC land, and I’ve always had the utmost respect for this program,” Gattis said. “When you look at the history, the tradition and the legacy of this place, Miami is one of the most storied programs in all of college football. When the opportunity came up to be a part of this program, it was one that I just couldn’t turn down. We’ve got an unbelievable staff and I’m really, really excited about Coach Cristobal’s vision.”

In addition to winning the nation’s top assistant honor a season ago, Gattis has mentored a Biletnikoff Award winner, multiple All-Americans and  all-conference players. He has been a part of four conference championship-winning teams and has coached in multiple College Football Playoff games.

The Wolverines were stellar on offense a season ago, ranking No. 16 in scoring offense, No. 25 in total offense, No. 15 in rushing offense, No. 16 in third down conversion and No. 24 in red zone offense. Michigan won the B1G title in dominating fashion, routing Iowa 42-3 before earning a bid to the CFP for the first time in in program history.

In 2020, Gattis’ unit averaged 28.3 points and 381.8 yards per game. The Wolverines gained over 350 yards of offense in four of six contests and went over 450 yards of offense three times. Running back Hassan Haskins averaged more than six yards per carry (No. 24 in NCAA), while four players averaged 10-plus yards or better per reception – including receivers Ronnie Bell (15.4 yards per catch) and Cornelius Johnson (15.9).

In his first season, Gattis led the Wolverines offense to a 5,000-yard season (5,220 yards), averaging more than 400 yards of offense per game. The Wolverines averaged 31.7 points and 401.5 yards per contest buoyed by a stretch which saw Michigan out-gain and out-score four league opponents and Notre Dame by a combined +1,101 yards and +114 points. Thirteen different Wolverines were named All-Big Ten on offense under Gattis.

Gattis coached wide receivers Nico Collins (37 catches, 729 yards, seven touchdowns) and Bell (48 catches, 758 yards, one touchdown) to career-best seasons along with quarterback Shea Patterson. Collins’ 19.7 yard-per-catch average led the Big Ten Wide receiver Donovan Peoples-Jones (six touchdowns) was also a big end zone factor, and five pass-catchers registered at least 25 receptions each. Patterson became the third Michigan quarterback to throw for 3,000 yards in a season (3,061), throwing for the third-most yards (384) and the second-most touchdowns (five) in a single game during the course of the year. U-M had two rushers over 600 yards in Zach Charbonnet (726 yards, 11 TDs) and Haskins (637 yards, 4 TDs) and Charbonnet’s 11 rushing scores were a freshman record at Michigan.

Prior to his arrival in Ann Arbor, Gattis worked as the co-offensive coordinator and wide receivers coach at the University of Alabama. He helped the Crimson Tide reach the College Football Playoff National Championship Game and mentored All-American receiver Jerry Jeudy, the 2018 Biletnikoff Award winner, who caught 68 passes for 1,315 yards (19.3 avg.) and 14 touchdowns. In addition, Gattis developed Jaylen Waddle, who earned first team All-American honors by Pro Football Focus. The Crimson Tide had four receivers and a tight end surpass 500 yards receiving on the year.

Prior to his position with the Crimson Tide, Gattis spent four seasons as the wide receivers coach and passing game coordinator at Penn State (2014-17). He also led the program’s offensive recruiting efforts, helping the Nittany Lions ink four straight top-25 recruiting classes, including a pair of top-15 classes. Gattis was selected as the 2015 Big Ten Recruiter of the Year by Scout.com for his efforts. On the field, he tutored All-Big Ten receivers DaeSean Hamilton (2014, ’17) and Chris Godwin (2015-16).

Gattis spent two years as wide receivers coach at the University of Vanderbilt (2012-13) before moving into the Big Ten Conference. During his time with the Commodores, Gattis coached Jordan Matthews to All-America honors twice. Matthews ended his career as the SEC’s leader in receptions and receiving yards while also setting the single-season mark receptions with 107 in 2013.

He spent the 2011 season at Western Michigan as the wide receivers coach, mentoring Jordan White to consensus All-American honors. White led the NCAA in receptions with 140 for 1,911 yards during the 2011 season and broke numerous Mid-American Conference receiving marks. Gattis began his coaching career as an offensive graduate assistant coach at North Carolina in 2010.

Gattis played collegiately at Wake Forest, where he earned his bachelor’s degree in sociology in 2006. He was an All-Atlantic Coast Conference safety in 2005 and 2006. Gattis was a fifth-round pick of the Jacksonville Jaguars in the 2007 NFL Draft. He spent part of the 2007 season with Jacksonville before moving on to play for the Chicago Bears during the 2007 and 2008 seasons.