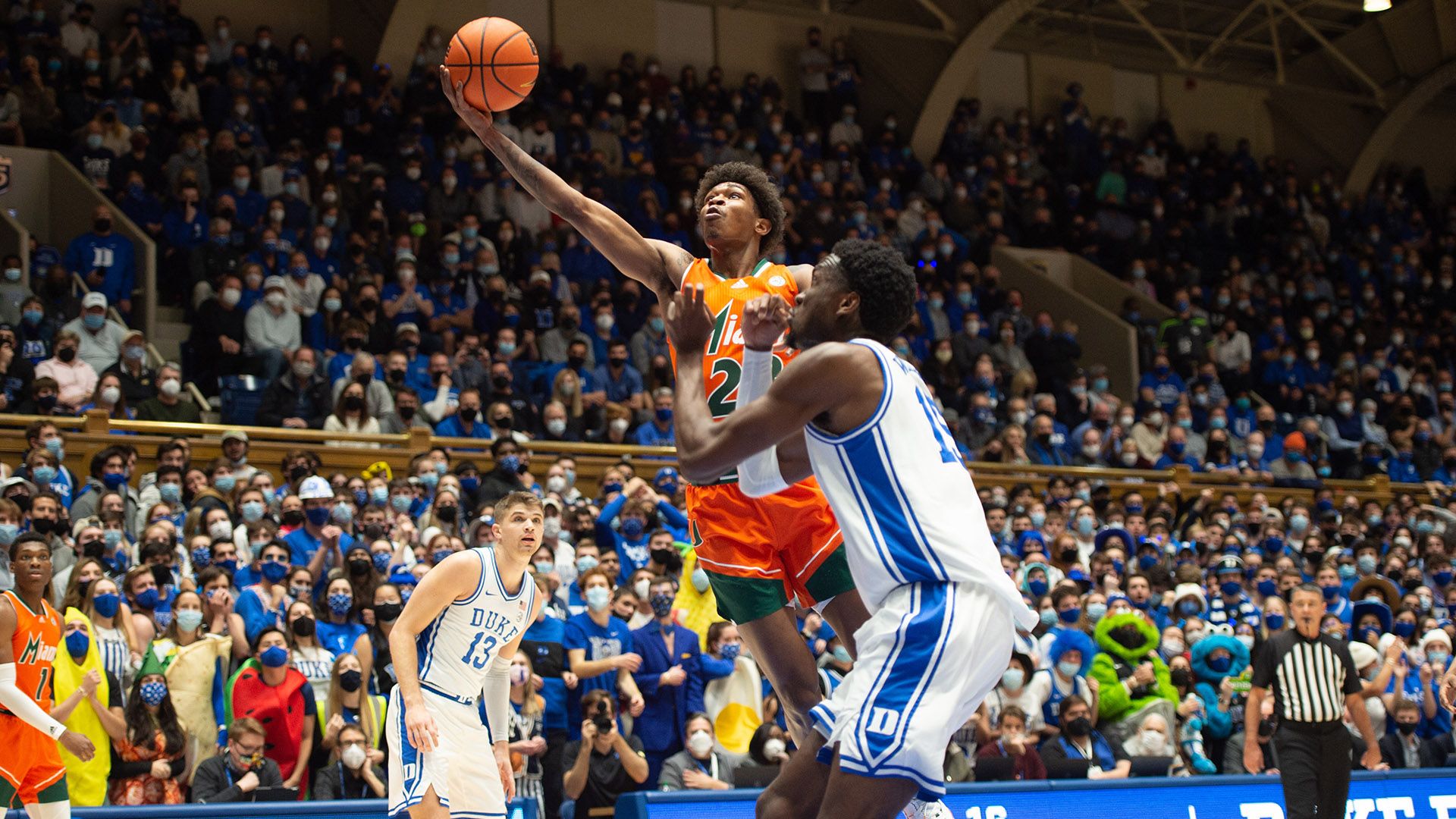 The Hurricanes led by as many as eight points in a start-to-finish thriller to become the first team in the nation this season to knock off a top-two team on the road. Sixth-year redshirt senior guard Charlie Moore scored a team-high 18 points for the Hurricanes, who tied a program record in ACC play with 15 steals.

Seven of those steals came from Moore, good for the most ever by a Hurricane in ACC play and tied for the second-most ever by an opposing player at Cameron Indoor Stadium. The stingy defense helped Miami (13-3, 5-0 ACC) up its winning streak to nine in a row.

“That was an exciting game from start to finish,” Miami head coach Jim Larrañaga said after moving to 7-7 against Duke during his time at The U. “I thought our guys played extremely well and got us off to a good start. Duke came roaring back and played very well. We were tied up at the half and both teams kind of just exchanged punches in the second half.

“Duke, obviously, has earned their high ranking,” he continued. “I’m really proud of the way my guys executed the game plan and stuck together.”

The sides went into the intermission deadlocked at 32, the first even score at the break for Miami this season. The Hurricanes notched 11 first-half steals, setting a program record in the ACC era (since 2004-05) for a single frame. Moore, who scored a game-best nine first-half points, individually recorded five steals, already tying his career high. In total, Miami forced 13 turnovers and committed just four, en route to a 13-0 edge in points off giveaways.

Duke took a five-point lead in the second half, but Miami answered with a 13-2 surge in just 3:08 to go in front by six, 60-54, with 9:12 left. The spurt was part of a streak of nine straight made field goals, including three in a row by third-year sophomore guard Isaiah Wong.

The Hurricanes held a three-point edge, 71-68, in the final 100 seconds, but Duke scored six consecutive points in 48 seconds to go up, 74-71, with 44.9 ticks remaining. Moore made a driving layup through contact at the other end and although he missed the free throw, fourth-year junior guard Jordan Miller grabbed the rebound and sixth-year redshirt senior guard Kameron McGusty made a layup to put Miami up by one. After a defensive stop, Wong split a pair of free throws with 16 seconds to play.

Duke then missed multiple shots at the other end, sending the Hurricanes into a raucous celebration in front of the silent crowd of 9,314.

“When they got ahead by three, it didn’t look good for us, but Charlie Moore made a sensational move to the basket, made an incredible layup and then Jordan Miller came up with an incredible offensive rebound,” Larrañaga said. “Kameron McGusty hit the game-winner, so a lot of guys contributed throughout the game.”

Miller, Wong and McGusty all joined Moore in double figures. Miller scored 17 points on 6-of-11 shooting from the field, adding a 4-of-4 mark from the line to set a season best in makes. Wong notched 15 and McGusty, in a season-high 38 minutes, added 14.

Duke freshman forward Paolo Banchero paced all scorers with 20 points on 6-of-10 shooting, adding a 6-of-7 mark from the line. Junior forward Wendell Moore Jr., registered a 12-point, 10-rebound double-double, adding a game-high seven assists, but Miami forced him into six turnovers.

Miami forced Duke into 19 turnovers and committed only five, tied for its fourth-fewest ever in an ACC game, and post a 17-2 edge in points off turnovers. The undersized Hurricanes also had a 52-38 advantage in paint points, good for a season high in that category.

The Hurricanes are back in action Tuesday at 8 p.m. against Florida State at the Donald L. Tucker Civic Center in Tallahassee, Fla., live on ACC Network.

MIAMI HURRICANES POSTGAME NOTES
– The Hurricanes moved to 9-22 all-time against Duke, including 3-11 on the road and 7-7 in Larrañaga’s tenure.
– Since Larrañaga arrived in 2011-12, Miami’s seven wins against Duke are solely the second-most of any program during that span, trailing only the 10 by North Carolina, which plays Duke at least twice a year.
– The Hurricanes’ three road victories over Duke since Larrañaga’s 2011-12 arrival are solely the second-most of any team, behind just the four by North Carolina.
– Miami (7-7) and Louisville (6-6) are the only ACC teams with a .500 record against Duke during Larrañaga’s tenure, with one of the Cardinals’ wins coming before they joined the league.
– According to ESPN Stats & Info, Larrañaga is the fifth coach with multiple AP top-five road wins over Duke, joining Dean Smith (five), Gary Williams (three), Roy Williams (three) and Dave Odom (two).
– Larrañaga, who entered the game with the ninth-most victories of any active Division I coach, is now 683-467 in 38 years as a head coach, including 213-133 in 11 seasons at Miami.
– With 213 wins as an ACC head coach, Larrañaga tied Vic Bubas for No. 14 on the all-time leaderboard.
– Larrañaga now has nine wins over top-10 foes during his Miami tenure, including eight in ACC play.
– The only other team in country to defeat a top-three opponent on the road this season was then-No. 23 Wisconsin, which won, 74-69, at then-third-ranked Purdue on 1/3/22.
– The victory matched the highest-ranked AP opponent the Hurricanes have ever defeated on the road, as they previously defeated second-ranked Connecticut, 73-71, on 2/20/99 in Storrs, Conn.
– This is the fourth AP top-two win in program history, with three of those four versus Duke, as Miami also knocked off the top-ranked Blue Devils, 90-63, on 1/23/13 and beat the second-ranked Blue Devils, 71-69, on 12/21/62, both at home.
– The Hurricanes now have eight victories all-time over teams ranked in the top five of either poll, including five in Larrañaga’s tenure and six against Duke.
– Miami now owns seven wins over AP top-five teams, including four under Larrañaga and five versus the Blue Devils.
– This is the fifth AP top-three win in program history, including the third under Larrañaga and the third against Duke.
– Saturday night marked the second time Miami has ever beat a top-three opponent while unranked, with lone other occurrence coming on 12/21/62 in a 71-69 home win against Duke.
– Miami’s last ranked victory was a 78-72 triumph over No. 16/18 Louisville on 1/16/21 in Coral Gables, while its last top-10 win was a 91-88 decision at ninth-ranked North Carolina on 2/27/18 and its last top-five victory was a 64-61 home result against third-ranked Virginia on 2/22/16.
– For the 10th time this season and first since 12/20/21, Miami used a starting lineup of McGusty, J. Miller, Moore, Waardenburg and Wong.
– The Hurricanes, for the third time (also 3/1/21 at Virginia and 3/9/21 versus Pittsburgh in the ACC Tournament), wore throwback jerseys, courtesy of adidas, that paid homage to Miami’s teams of the late 1990’s, including the 1999-2000 squad that won a share of the BIG EAST regular season title and earned the program’s first Sweet 16 berth.
– The Hurricanes are currently the only team in the ACC with a 5-0 league record and sit alone atop the conference standings.
– Miami is 5-0 in ACC play for the second time ever and first since 2012-13, when it started league play 13-0.
– The Hurricanes are riding a nine-game winning streak for the first time since 11/10/17 to 12/22/17 when they started the 2017-18 season with a 10-0 record.
– The win snapped a seven-game ACC road losing streak (last win on 1/9/21 at NC State) and a five-game losing streak against ranked foes.
– Miami’s 15 steals matched the mark set on 1/22/05 versus North Carolina for its most ever in ACC play.
– Moore’s seven steals set a new program record in ACC play eclipsing the prior mark that was recorded three times: Jordan Miller on 1/5/22 versus Syracuse, Angel Rodriguez on 1/2/16 versus Syracuse and Shane Larkin on 1/10/12 at North Carolina.
– Moore’s seven steals tied for the second-most in any game in program history and marked just the third time a Hurricane has reached that figure: Jerome Scott (nine) on 3/4/91 versus FIU and Vernon Jennings (seven) on 1/5/00 versus West Virginia.
– Only three other visiting players have logged seven-plus steals at Cameron Indoor Stadium: Florida State’s Trent Forrest (eight on 2/10/20), NC State’s Spud Webb (seven on 2/20/85) and NC State’s Kenny Carr (seven on 2/18/76).
– Moore logged five steals in the first half alone, tying the program record in any frame since Miami joined in the ACC in 2004-05.
– The Hurricanes’ prior record for steals in a half in the ACC era was 10, recorded twice: at Boston College on 1/20/16 and at North Carolina on 1/22/05.
– The last time Miami was tied at halftime was 3/1/21 at No. 21/20 Virginia in an eventual 62-51 loss.
– Both teams were perfect from the free-throw line in the first half, as Miami shot 5-of-5 and Duke went 8-of-8, while the Hurricanes also notched a 22-10 advantage in paint points through 20 minutes.
– Moore, who eclipsed 150 steals as a collegian, tallied double-digit points for the 66th time, including the ninth this year.
– Wong, who surpassed 950 points at Miami, scored double-figure points for the 48th time, including the 15th in 2021-22.
– J. Miller scored in double figures for the 56th time, including the sixth this season and the fourth in a row.
– McGusty recorded double-digit points for the 78th time, including the 50th as a Hurricane and 15th this year.
– The only other time Waardenburg had five assists in a game was 11/13/18 against Stephen F. Austin.