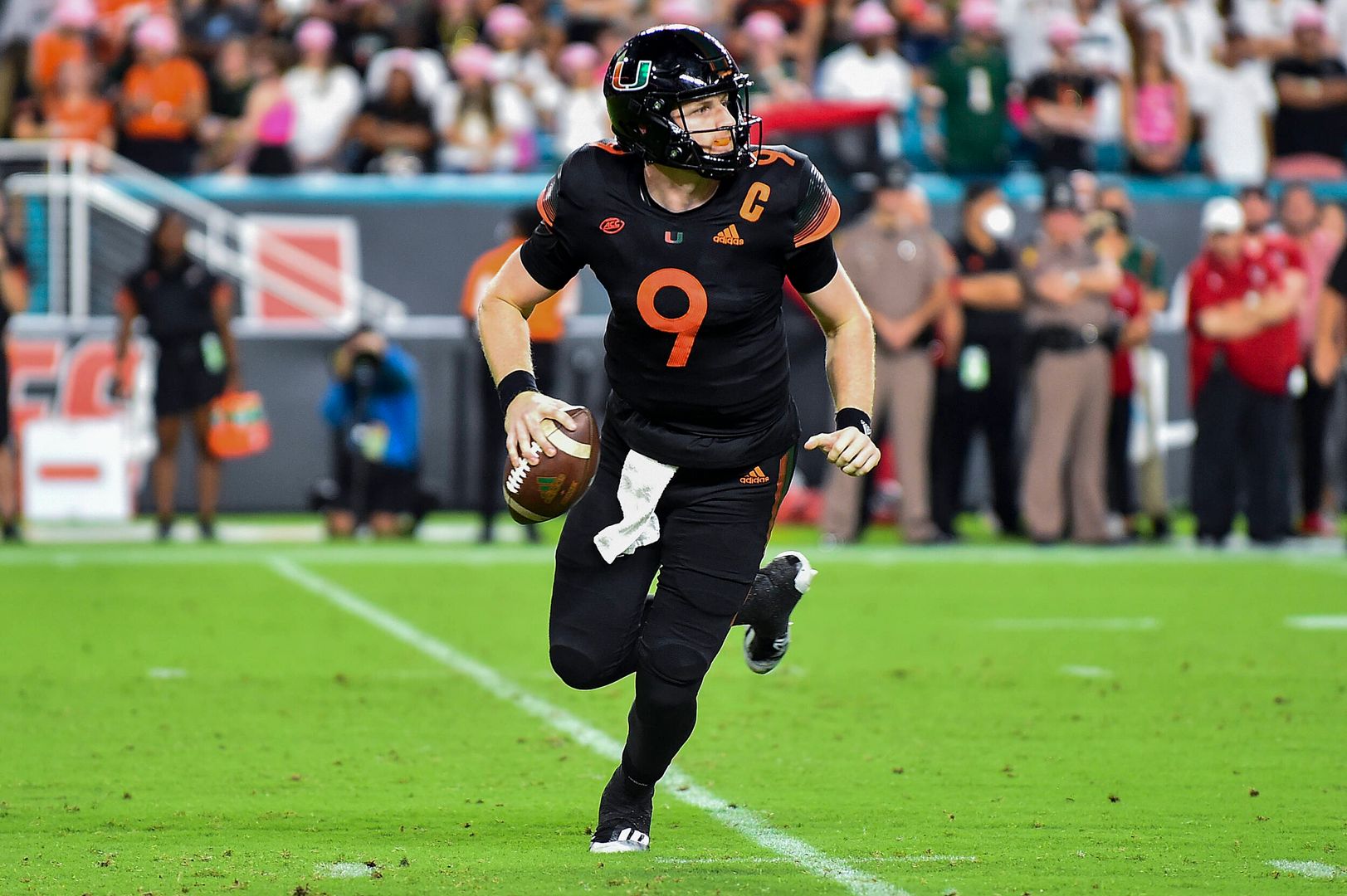 Van Dyke threw for a career-high 325 yards and four touchdowns, leading the Miami Hurricanes to a 31-30 victory over No. 18 NC State Saturday evening at Hard Rock Stadium.

“It’s hard to remember watching that guy today that he’s really in his third-ever game as a college quarterback,” Miami head coach Manny Diaz said. “We needed someone to rally around and that’s what Tyler did today.”

The 6-foot-4, 224-pound quarterback completed 25 of his 33 attempts, including a 21-yard game-sealing connection with tight end Will Mallory on third-and-16 with about two-and-half minutes left.

NC State (5-2, 2-1 ACC) responded when kicker Christopher Dunn hit a 40-yard field goal that clanged off the left upright and through the goalposts, pulling the Wolfpack within one with 5:39 remaining.

The Canes ran three minutes and 46 seconds off the clock, but NC State got the ball back for one final chance.

Trailing 31-30, the Pack faced a fourth-and-8 from their own 46-yard line. Redshirt sophomore quarterback Devin Leary completed a 6-yard pass to Thayer Thomas, but Miami safety Kam Kinchens kept Thomas short of a first down to force a turnover on downs.

“It’s a routine play,” Kinchens said. “I do it every day in practice. Every time they have stacks, he’s going to stand off the line and do an out route, so I kind of knew it was coming. I just had a big play. I make it all the time.”

Van Dyke and the Canes started strong, marching down the field for an 8-play, 75-yard drive that resulted in a touchdown. Van Dyke linked up with Rambo for the 25-yard score in the right corner of the end zone less than five minutes into the game.

Dunn drilled a 33-yard field goal try to get NC State on the board with 4:24 remaining in the first quarter.

In the opening moments of the second quarter, on fourth-and-1, Van Dyke hit running back Jaylan Knighton in stride for a 53-yard touchdown, extending the Hurricanes’ lead to 14-3.

The Wolfpack responded with two touchdowns, taking a narrow 17-14 advantage into the intermission.

However, the Hurricanes answered immediately.

On the first play from scrimmage of the second half, Van Dyke aired out a 60-yard heave to Rambo. He found Mallory for a 5-yard touchdown four snaps later.

Leary scampered for a 17-yard score in the seconds of the quarter, pushing NC State in front, 27-24, and setting the stage for Van Dyke’s heroics.

Rambo posted a game-high nine receptions for 127 yards and two touchdowns while Knighton recorded 166 total yards and a touchdown.

With the victory, Miami has now defeated a ranked opponent in seven straight seasons.

“This team is mentally tough,” Diaz said. “This team is resilient. We’ve shown it again and again. It’s baked into our DNA at this point. That’s part of the culture of our program.”

Next, Miami travels to Coastal-leading Pittsburgh on Oct. 30. Kickoff is slated for noon at Heinz Field.