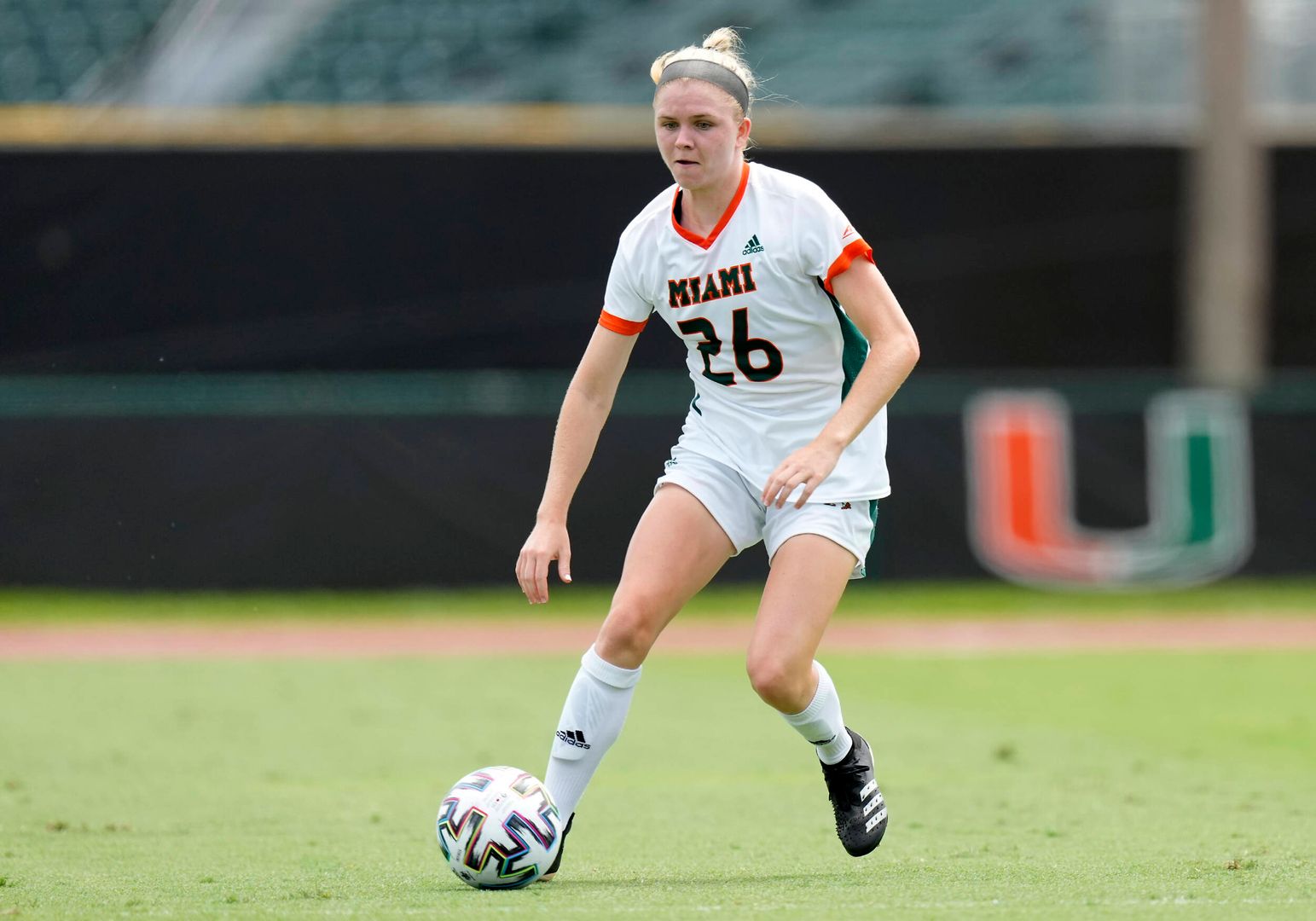 CORAL GABLES, Fla. — Junior defender Emma Tucker has a knack for making people around her feel like family.

“She has a friendly demeanor,” junior forward/midfielder Jaclyn Marra said. “She lights up the room. She’s always joking and smiling. She’s always there for her friends, to listen and provide a serious shoulder to rely on, and at the same time, she’s the funniest person in the room.”

While she’ll enjoy seeing the fall foliage, Tucker is most excited to see her family and friends.

For Tucker, family is everything.

“My parents told me when I was in kindergarten, but it wasn’t until third grade that I understood and had some questions. My parents sat me down and talked it out with me,” Tucker said. “It’s so funny because when I tell people that I’m adopted, they don’t believe me because I fit perfectly in with my family. I look just like my mother and very similar to some of my siblings. People always question it.”

Tucker was born in Barnstable, Mass., located on Cape Cod. Adopted right after birth, she has developed an inseparable connection with her family.

“The bond we have is very special,” Tucker said. “Everything happens for a reason. This was the perfect fit. I wouldn’t want to have it any other way.”

The 5-foot-4 defender has three siblings, an older brother, Adam, and two younger sisters, Elly and Abby. Her parents, David and Krista, both attended Boston College with her dad playing football for the Eagles.

Tucker is a proud Boston girl through and through, growing up as a die-hard Boston Red Sox and New England Patriots fan.

And although she didn’t attend or play at her parents’ alma mater, Tucker doesn’t think her parents mind.

“I told them I just wanted to get out of the cold,” she said. “I don’t think they have any complaints because they get to visit me here in Miami.”

Playing at The U was never on Tucker’s radar.

She started playing soccer as soon as she could run. A two-sport athlete, Tucker stopped playing basketball to focus solely on soccer once she arrived at Notre Dame Academy.

“The recruitment process started my freshman year of high school. Miami was the first school to ever reach out to me,” said Tucker, who was the 2018 Eastern Massachusetts Girls’ Soccer Coaches Association D2 South Player of the Year. “I instantly fell in love with the school. I love the school and I love the weather.”

As a freshman, Tucker made an immediate impact. She scored her first career goal in the Hurricanes’ second match of the season.

One year later, she was one of just five Canes to appear in all 13 contests. Midway through her sophomore campaign, Tucker shifted positions, moving from forward to defense. She logged 810 out of a possible 830 minutes across the final 10 affairs.

Tucker has emerged as a leader in her junior campaign. She started the first eight matches of the season, registering the second-most minutes among field players on the team.

“Emma’s mentality is to do whatever she can to help the team. She’s definitely a team-first type of player. She’s done a good job of asking questions, coming in to do video, doing extra work, taking care of her body. Her progression is born out of hard work and a desire to be the best she can be,” Miami head coach Sarah Barnes said. “She cares so much about the team and the team’s ability to grow and develop.”

Tucker’s selfless mindset has helped the Canes cultivate a family atmosphere inside and outside the locker room, something that holds a dear place in her heart.

“Family for me always comes first,” Tucker said. “Having the ability to build a bond like that within the team strengthens us on and off the field. It’s very special to have that connection with our sisters. Especially when you’re on the field, there’s that will to fight for them and to die out there for them.”

Tucker will have her family both on the pitch and in the stands Saturday night at Newton Lacrosse & Soccer Field, an evening she’ll cherish for a long, long time.

“I think it’ll be really special,” she said. “Freshman year, that first time that I got to go home and see my family and friends, it was awesome knowing that people came out to support me. It made me feel really good and it motivated me even more.”