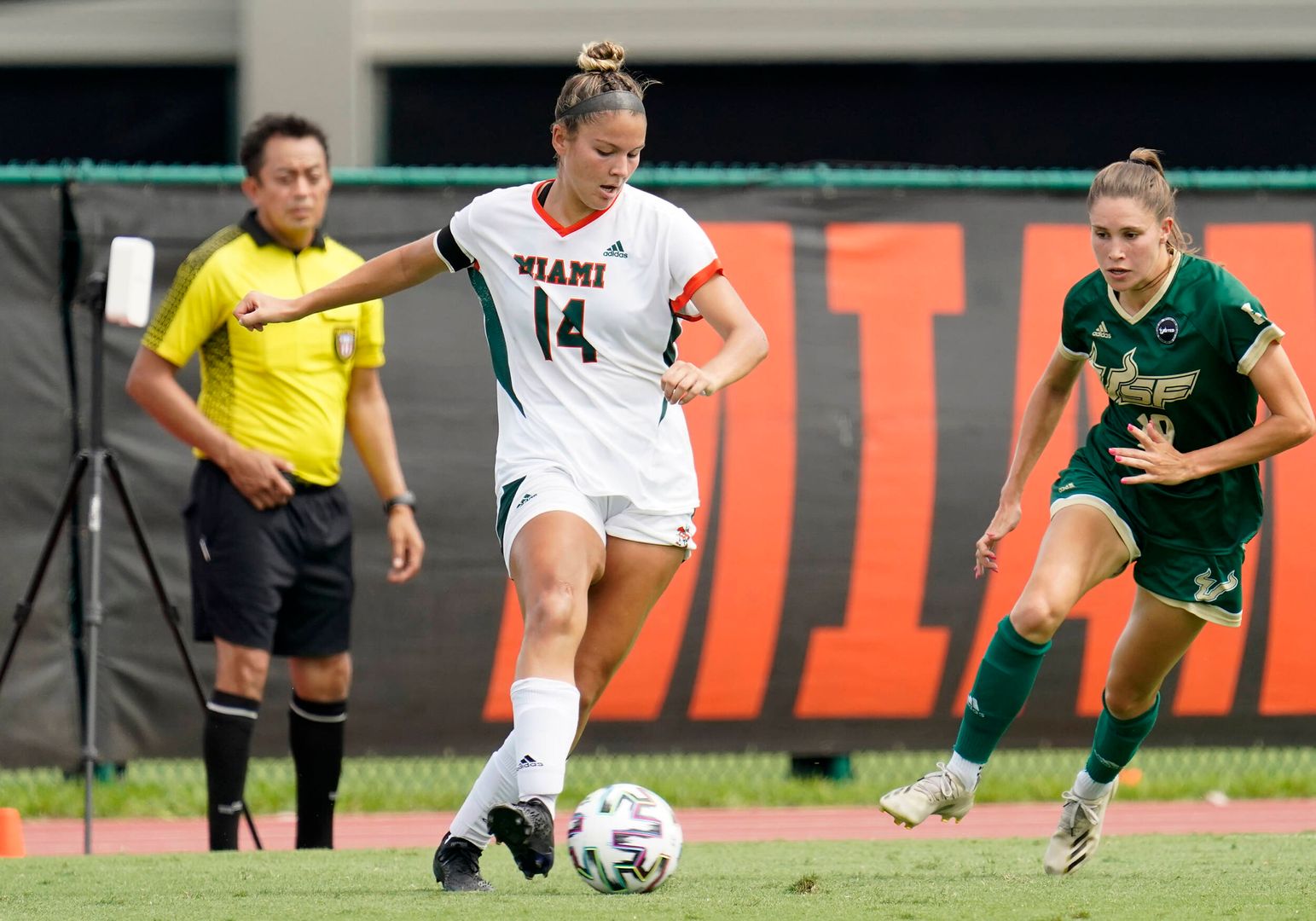 One season after being held without a conference victory, the Hurricanes are poised to show they belong among the toughest competition in the country.

Miami (3-3) opens up its 10-match Atlantic Coast Conference slate with a showdown against the Louisville Cardinals (4-1-1) Friday at 7 p.m.

“There’s been a lot of growth,” Canes head coach Sarah Barnes said. “We showed a lot more maturity and understanding in non-conference play. There are a lot of positives. For us, it’s about continuing to be prepared and competing day in and day out.”

The Hurricanes posted three shutouts in non-conference action, the most since 2017. The trio of clean sheets matches the total of the last two seasons combined.

Along the way, Miami downed rival Florida for the first time since 2012, toppling the Gators in overtime.

Twenty-three Hurricanes saw action in non-conference play with 17 Canes appearing in at least five of the first six contests.

A young Miami team has been exposed to varying types of styles, which has primed the Hurricanes to face the gauntlet in the ACC.

“It’s more competitive than ever,” Barnes said. “This is why you come to an ACC school. Every game, day in and day out, is a challenge. There are a lot of great opponents that lay ahead. We’re excited for the opportunity.”

Five ACC schools currently rank in the top-25, including No. 1 Florida State, No. 2 North Carolina and No. 4 Duke.

The Hurricanes are hoping their early-season tests have prepared them for the heart of their campaign.

“We’ve learned a lot,” said sophomore defender Delaney Brown, who was the lone Cane to start all 13 matches last season. “We’ve improved a lot. We go into every game with the mindset of being relentless. We’ve realized that we have the talent, and it comes down to being consistent.”

Miami allowed just four goals in six non-conference games, in large part to the Hurricanes’ experience on the backline.

Senior captain Selena Fortich anchors the defense and is in line to play her 50th career match Friday evening.

“Selena has grown so much over the last four years. She’s really bright. She has a great mind for the game. She is a confident young woman who has a lot of natural leadership qualities,” Barnes said. “She is probably one of the more competitive players I’ve worked with over the years. Every time she steps on the field, she demands more and holds really high standards. Each year, she’s elevated herself even more and it’s had a really positive impact on what we’re building here.”

Fortich’s leadership has spread among her teammates, boosting the squad’s confidence heading into ACC play.

“I’ve learned a lot. She’s a very good leader and I’ve always looked up to her,” Brown said. “Playing next to her has always helped me. When she graduates, I want to be able to take that role and make the same impact she has.

With Miami gearing up for its conference opener against Louisville at Cobb Stadium, the Hurricanes are out to prove they can compete at the highest level.