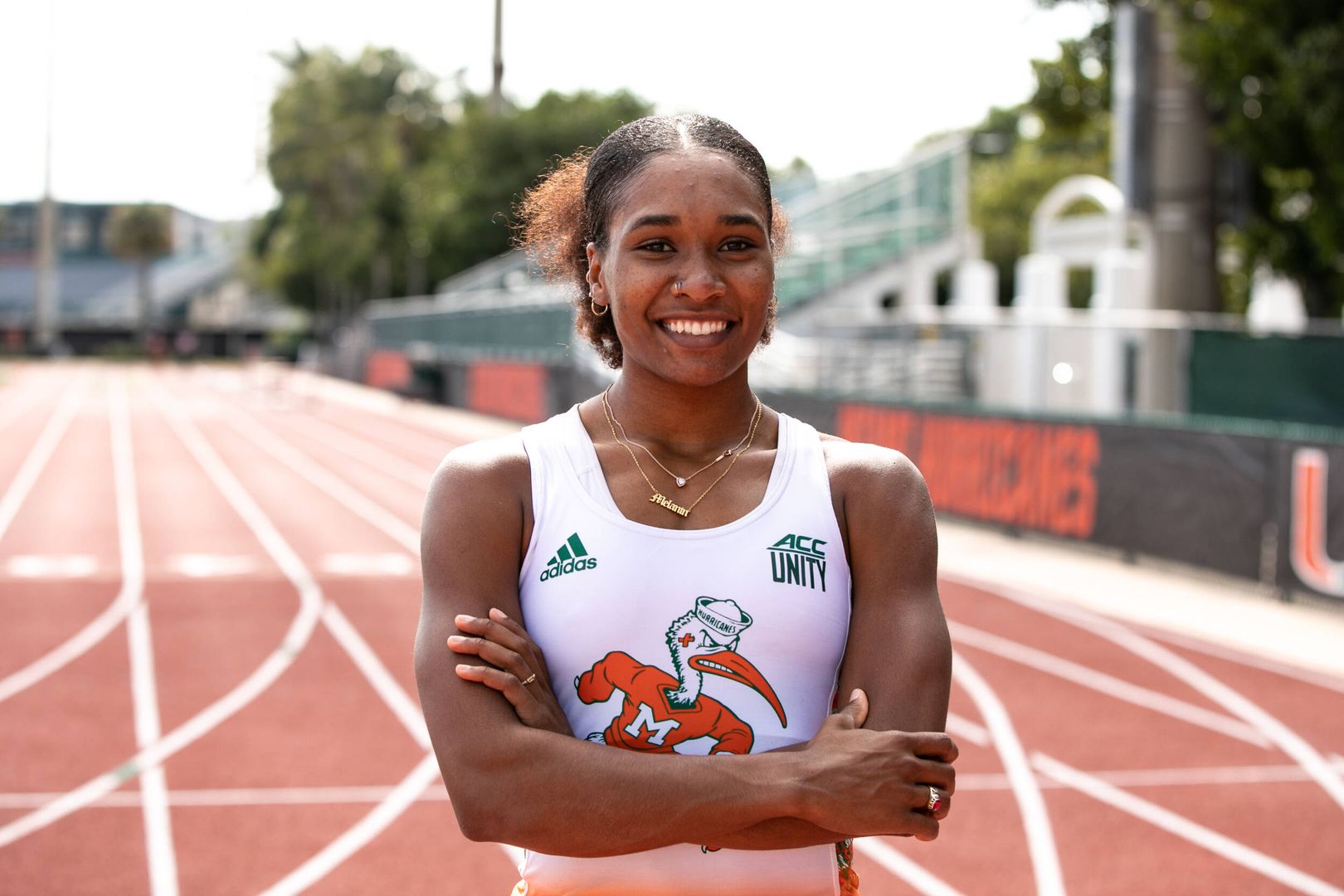 CORAL GABLES, Fla. – It’s one of the moments she believes changed the course of her career.

When doctors told Michelle Atherley in 2017 the knee injury that had been troubling her had the potential to sideline her for good, the Hurricanes track and field standout was firm.

She was going to do whatever work was needed to make sure that didn’t happen.

“I think it kind of flipped a switch. It allowed me to analyze a situation and push past it as much as I could. It was almost like a split-second of internal fear, but right after that second, it was very positive,” Atherley said. “I was like ‘Okay, this is not an option. How do we move forward?’ and I’ve taken that attitude into every competition since because I’m expecting to do well and I’m expecting to execute in a way that I know I can because I’ve proven in practice…

“It was just one of those Miami experiences that will stick with me forever and taught me so much about myself and so much about being a competitor, about being a hard worker and about believing in yourself because no matter what’s happening around you, you know you have control over what you can do.”

Four years after that fateful resolution, Atherley stands ready to compete in the heptathlon at the U.S. Olympic Track and Field Trials at Hayward Field in Eugene, Oregon this weekend.

At that very same venue just 10 days ago, Atherley completed her historic Miami career with a runner-up finish at the NCAA Outdoor Track and Field Championships.

For her, the last three weeks have been about both reflecting – and looking forward. 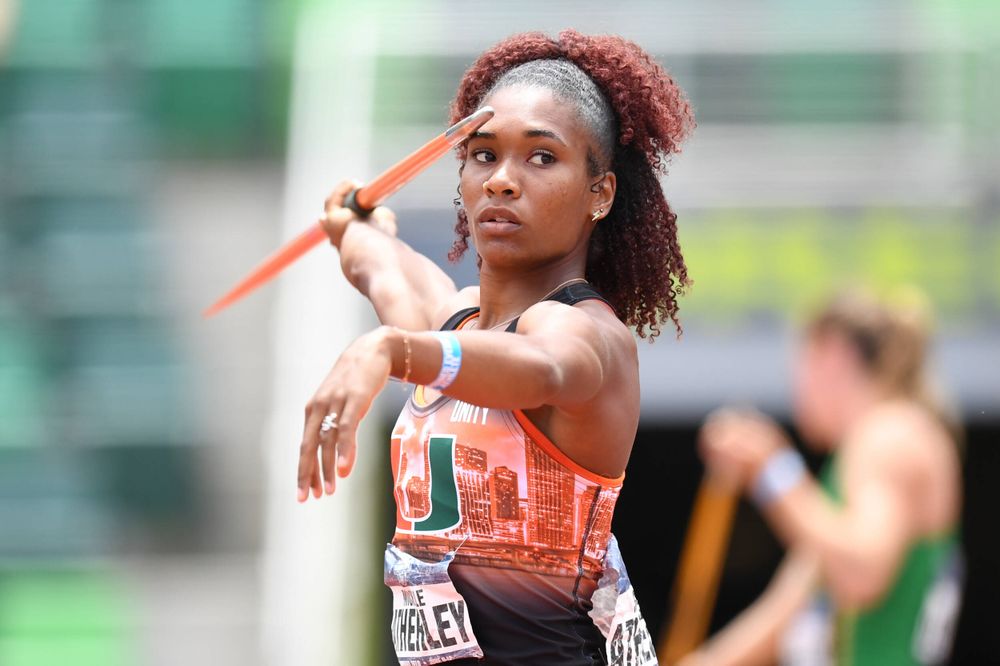 EUGENE, OR - JUNE 12: during the Division I Men's and Women's Outdoor Track & Field Championships held at Hayward Field on June 12, 2021 in Eugene, Oregon. (Photo by Isaac Wasserman/NCAA Photos via Getty Images)

“I actually felt a sort of calmness at [NCAA’s]. It was unusual because it was one of the biggest moments of my career and I knew it was the last one as a Hurricane and I was going for the title. But I felt at ease while I was going through it,” Atherley said. “I really, really enjoyed the moment, which is something that’s hard for me to do because I’m a very focused competitor.”

That competitive drive has helped her put together an incredibly impressive resume during her time as a Hurricane.

In 2019, she won the NCAA Pentathlon championship and was named the ACC Women’s Field Performer of the Year, an honor she claimed for the second straight time after her performance this past season. In 2018, she helped lead Miami to the ACC Outdoor Track and Field Championship.

She has won three straight ACC heptathlon titles and is a six-time first team All-American.

And her work at Miami extends far beyond all she did in her sport.

She was a star in the classroom, earning multiple ACC All-Academic Team honors throughout her career and being recognized multiple times as an honoree during Miami’s annual Celebration of Women’s Athletics.

Atherley leaves Miami with a degree in political science and master’s degrees in both public administration and international public administration. And over the course of the past year, she has found her voice as an advocate for civic engagement and social justice, founding Miami’s new Black Student-Athlete Alliance Organization and encouraging her fellow student-athletes to vote ahead of the 2020 election.

She also helped create the Black Male Student-Athlete Engagement and Empowerment Program, a space for Miami’s Black male student-athletes to meet, share their own personal experiences and address issues that affect them specifically. That program was recently announced as a recipient of one of the University’s racial justice grants.

Her impact, her coach says, won’t be forgotten any time soon – not on the track and not on Miami’s campus as a whole.

“She’s a leader. She gives her all, every day. She loves her teammates. She loves her team. She loves this University. The fact that she will go to a meet and do multiple events, not just for herself but to help the team is a testament to who she is,” said Amy Deem, Miami’s director of track and field and cross country. “She’s a young woman who has come into our program and had an impact, not only on the team and us as coaches, but on the University in general…What she’s done the last 14 months with the Black Student-Athlete Alliance, with all the things she’s done with the [Student-Athlete Advisory Committee] …She used her voice to represent all our student-athletes and to make campus a better place for all of us…

“To see someone be able to achieve at such a high level, on the track, but also go get the high GPA, to really, truly go to work and make our campus better for everyone, that’s her legacy. She will always be a tremendous ambassador for this University.”

"I’m satisfied when I know I’ve put out an effort that is 100 percent myself. So if I’m able to do that, I know that I’d make that team and that’s my goal, ultimately.”

With her career at Miami now behind her, Atherley has her eyes set on the next chapter: the Olympics.

Already once in her career, she’s donned red, white and blue to represent Team USA as a Thorpe Cup competitor in 2019. To do it in again in Tokyo next month, she says, would be a dream come true.

“That would be unreal. It would be absolutely insane. It would be gratifying. It would be…I don’t even know. My mind would be blown,” she laughed. “But I’d be very proud of myself. I’m satisfied when I know I’ve put out an effort that is 100 percent myself. So if I’m able to do that, I know that I’d make that team and that’s my goal, ultimately.”

And at Miami, where her impact won’t be forgotten any time soon, the Hurricanes are cheering her on – while reflecting on all she gave to the program and the University throughout her memorable career.

“She’s so ready to compete at this level, to compete with these women,” Deem said. “For her to go out there and finish the season with the best mark, wherever that falls, will be tremendous. She’s poised to do really well. I think she had a couple events at the NCAA Championships that she wishes she could do over. Hopefully, she takes that motivation and really goes, really lays it on the line and we see the best of Michelle, even better than what we’ve already seen. We as coaches know it’s there.”