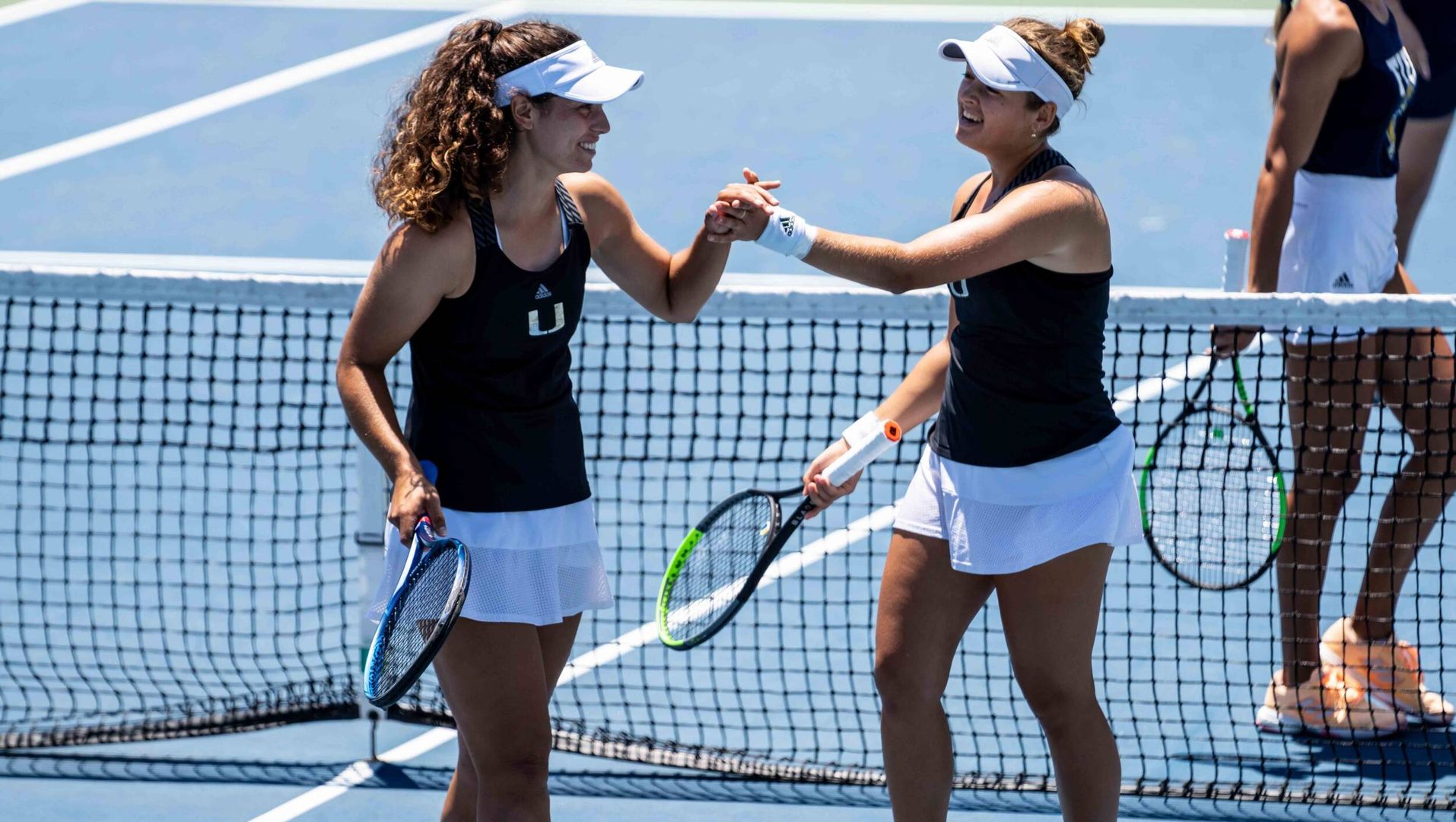 ORLANDO, Fla. – The University of Miami women’s tennis team rolled to a 4-0 win over No. 41 FIU Friday afternoon in the NCAA Team Championship Round of 64.

The Hurricanes narrowly took the doubles point and then picked up a trio of straight-set singles victories to blank their crosstown foe at the USTA National Campus. The victory sent No. 23 Miami (15-8, 8-5 ACC) into the Round of 32 for the 19th consecutive time.

“Considering how young we are and that it was the first time for a lot of kids being in the NCAA tournament, I think that we played pretty well,” Miami head coach Paige Yaroshuk-Tews said. “I think we played solid doubles; we did what we were supposed to do. I think as the match went on in singles, we got better. So, I was happy to see that.”

All three doubles matches were closely contested, but Miami eventually took a 5-4 lead on each court, en route to earning the opening point. The first victory came from third-year sophomore Daevenia Achong and second-year freshman Florencia Urrutia, who rallied back from a 1-4 deficit to defeat Basak Akbas and Kristina Miletic, 6-4.

The second-year freshman duo of Diana Khodan and Maya Tahan, ranked No. 15, sealed the point by topping Marina Alcaide and Andreea Velcea, 6-4.

The Hurricanes’ other ranked pair of fifth-year senior Estela Perez-Somarriba and freshman Isabella Pfennig, who check in at No. 22 nationally, held a 5-4 edge on Andjela Skrobonja and Kamila Umarova when play ended.

FIU (12-2, 3-0 CUSA) won three opening sets and had a set point in a fourth, but did not take another set the rest of the way, as Miami never let the result fall into jeopardy.

The Hurricanes actually quickly upped their lead to 3-0 behind emphatic wins in the lower third of the lineup. Tahan cruised past Miletic, 6-1, 6-2, and then Khodan downed Velcea, 6-1, 6-4, to put Miami within a point of victory.

The clinching point came in the lone ranked matchup. No. 10 Pfennig, who fought off a set point in the opener and won it after No. 93 Alcaide received a game penalty in the tiebreaker, controlled the second set on her way to a 7-6 (7-0), 6-2 decision. It marked the eighth ranked triumph of her young career.

When play stopped, all three remaining matches were early in the third set after Miami forced a split in each one. Urrutia led Akbas, 4-6, 6-2, 2-1 when action finished, while the other two contests were both in the opening game. Top-ranked Perez-Somarriba was deadlocked with Umarova at 4-6, 6-4, while Achong was in a tight 5-7, 7-6 (7-5) matchup with Skrobonja.

“I think, physically, we pulled away a little bit at the beginning of those second sets. I think that our tennis level raised in the second sets,” Yaroshuk-Tews said. “Hats off to FIU. I think that they played well in those three matches where they pulled out the first sets, but our girls responded well. Matches are two out of three sets and I think we started off the second half of the matches well. We’ve just got to get off to a better start tomorrow.”

With the victory, the Hurricanes moved to 26-1 all-time against FIU, including 5-0 in the NCAA Team Championship. Miami has won 16 consecutive matches over the Panthers, dating back to 2002.

That is the same year the Hurricanes started their streak of 19 straight NCAA first-round victories. Friday was the 15th time—all in the last 16 tournaments—Miami earned that opening triumph in shutout fashion.

The Hurricanes, making their 25th NCAA tournament appearance in a row, moved to 55-34 all-time in the event, including a dazzling 42-18 in Yaroshuk-Tews’ 20 years in charge. They are 28-27 at neutral sites and 30-6 in the state of Florida.

“Always nice to advance,” Yaroshuk-Tews said. “Happy for the team, happy for the girls. Looking forward to a great match tomorrow.”

Miami will now face UCF, both ranked and seeded ninth nationally, in the Round of 32, with action set for Saturday at 5 p.m. at the USTA National Campus.