CORAL GABLES, Fla. – It has been, Brevin Jordan acknowledged, the job interview of a lifetime.

For the better part of the last three months, he has spent countless hours in the gym, working to reshape his body ahead of the NFL Draft. To help on that front, though he’s been back home in Las Vegas, he has drastically cut back on his mother Beverly’s Korean home-cooking, something he no doubt missed while the two were separated by thousands of miles during Jordan’s time at Miami.

He worked to put his best foot forward during his Pro Day, he’s spoken to more NFL personnel than he can name and he’s relied on advice from some of the Hurricanes who have gone through the same grueling process in recent years, namely former Miami tight ends David Njoku and Chris Herndon.

There has been work. There has been sacrifice and this week, Jordan hopes his efforts will pay off when his phone rings and an NFL team tells him it is time to start his professional career.

“This has been great. Honestly, I’ve loved it. I’ve really focused on my body, what I eat, what I put inside my body and I’ve loved it,” Jordan said. “This process has really given me the time to focus on the little things…Just having the ability to just to focus on all of that has been great…It still doesn’t feel real. I don’t think it’s going to hit me until I get drafted…This is a long process and you have to stay committed to it.” 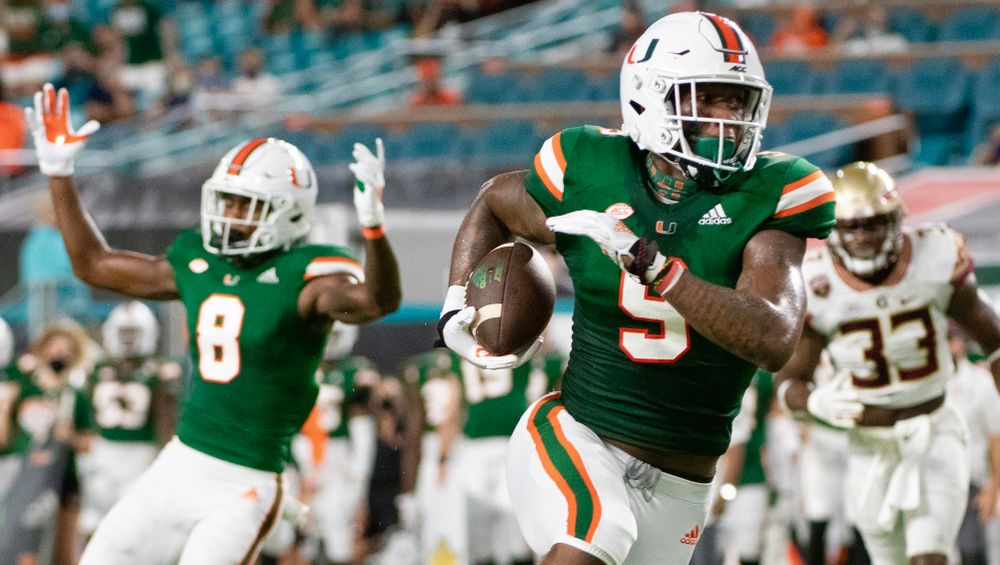 As much as he’s appreciated the work of going through the NFL Draft process, though, Jordan understands it’s just a part of what he believes will make him a strong professional.

His resume at Miami – the school widely known as “Tight End U” – will certainly help.

After arriving in Coral Gables as the nation’s top-rated tight end coming out of Nevada’s Bishop Gorman High,  Jordan started 11 games as a freshman and his 32 receptions and four receiving touchdowns were second-most on the team.

As a sophomore, he earned first-team All-ACC recognition and was a Mackey Award semifinalist after making 35 catches for 495 yards and two touchdowns. And last fall, despite missing three games, he finished with 38 catches for 576 yards – both of which ranked second for the Hurricanes. His seven touchdowns were tied for the team lead.

Throughout his Miami career, Jordan delivered in more than a handful of big games.

As a freshman, his 41-yard go-ahead touchdown helped the Hurricanes rally from a 20-point deficit against rival FSU. Against Virginia Tech in 2019, his seven catches for 136 yards and a touchdown nearly helped the Hurricanes pull off another improbable comeback. And in what was ultimately his last game as a Hurricane, Jordan had a game-high eight catches for 96 yards with two touchdowns.

“The film speaks for itself. I mean, this process is just a little, little bitty piece of this whole thing,” Jordan said. “The film is louder than anything else that can happen in this process. So I don’t think there was anything I really just wanted to prove…The competitive mindset we have here at Miami, how we practice, how we compete with one another, that’s what is going to ultimately help me in the NFL because the NFL is all about competition. You’re trying to take somebody’s job. So, that’s going to be an advantage for me when I get out there.”

"The competitive mindset we have here at Miami, how we practice, how we compete with one another, that’s what is going to ultimately help me in the NFL..."

But it wasn’t just the high-level competition Jordan embraced during his time as a Hurricane.

The tight end will happily point out that he leaves Miami having beaten the Seminoles three straight years. And the bonds he forged with his teammates and memories he made in Coral Gables are, he says, beyond special to him.

“It meant the world to me to play at Miami. That’s my school. I’m a kid all the way from Vegas, but that’s my school,” Jordan said. “I’m going to be a ‘Cane until the day I die…It was the greatest college experience I could ever ask for and it was beautiful. I loved it.”

With his time at Miami behind him and the clock ticking ahead of the start of Thursday’s draft, all Jordan can do now is wait to see what’s next.

He plans to be at home with his family waiting to hear which team will be adding him to its roster and he’s ready to add his name to the legacy of “Tight End U.”

“It’s still crazy to me that I have this opportunity, that I’m even in this situation,” Jordan said after his Pro Day performance last month. “If you would have asked me a couple years ago…I probably would have said I wanted to be an actor…Football has always been my life, but there’s just no words for this. I’m very humbled, very thankful and very grateful to be in this situation. There are no words for it, really. To repay my mom back, repay my brothers back, there’s no words for it.”