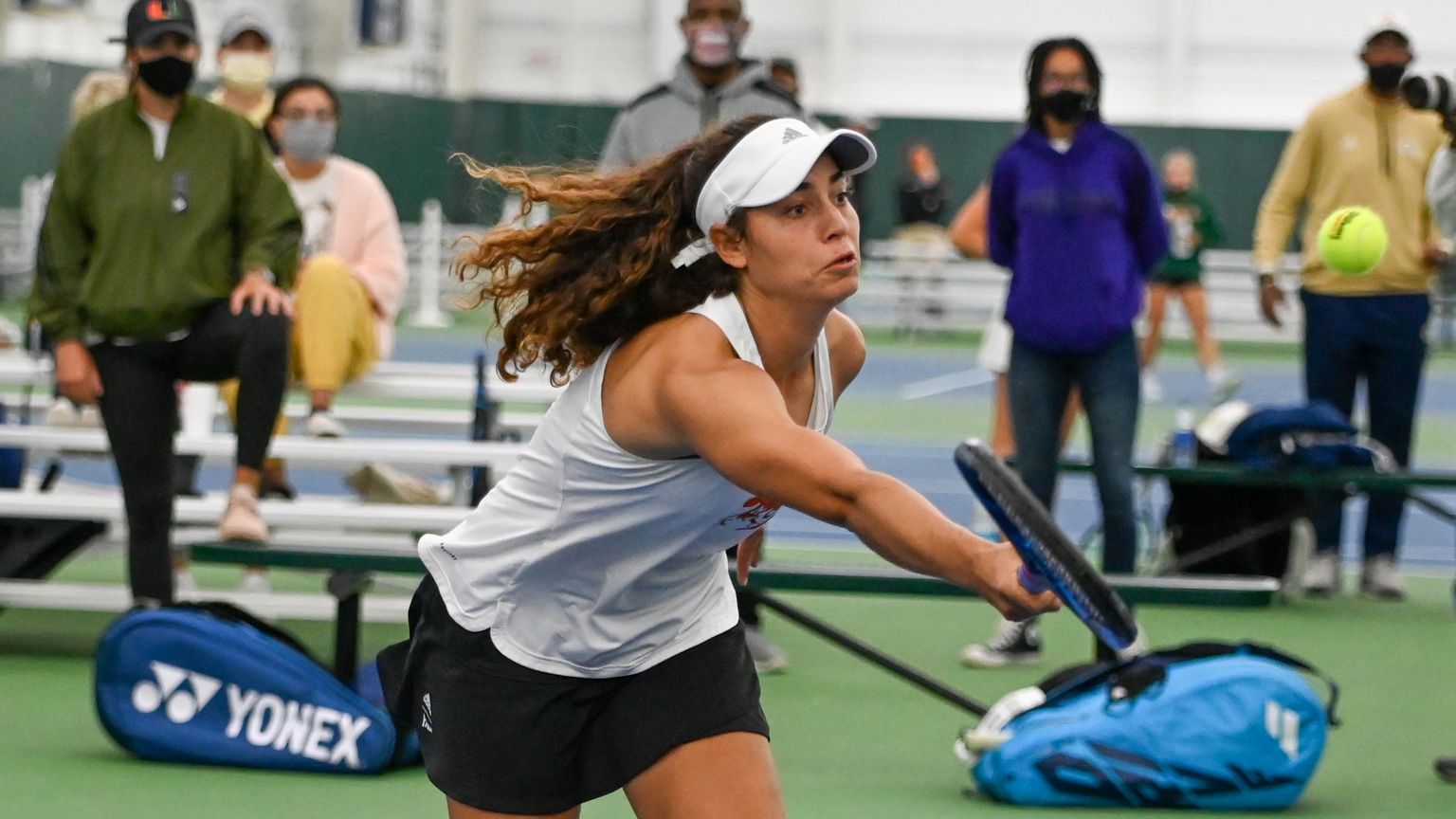 ROME, Ga. – The University of Miami women’s tennis team roared back from a 3-0 deficit to pull even with sixth-seeded Georgia Tech Saturday afternoon in the ACC Tennis Championship semifinals, but dropped a third-set decision in the final match.

The seventh-seeded Hurricanes, ranked No. 24/20, nearly rallied their way past No. 16/17 Georgia Tech, but came up on the short end of a 4-3 decision at the Rome Tennis Center at Berry College.

“Credit to Tech for playing a great match,” Miami head coach Paige Yaroshuk-Tews said. “I’m not super happy with how we started the match, but I’m proud of the girls, proud of their fight, proud of their composure in a big situation. We came up a little short.”

Miami raced out to a 4-0 lead on Court 3 and a 2-0 edge on Court 1 in doubles, but could not hold the latter lead and dropped the opening point.

The Yellow Jackets clinched in the other top-25 affair on Court 1, where second-ranked Victoria Flores and Kenya Jones fought off three game points in the 10th game to hold at deuce and win the match, 6-4, over fifth-year senior Estela Perez-Somarriba and freshman Isabella Pfennig, clinching the 1-0 lead.

The final match was played out, with third-year sophomore Daevenia Achong and second-year freshman Florencia Urrutia holding on for a 6-4 triumph over Monika Dedaj and Carol Lee.

“Doubles is such a huge part of college tennis. When you begin with a point one way or another, it’s 25 percent of the match,” Yaroshuk-Tews said. “And quite honestly, today we didn’t show up at number one and two doubles, and play the type of tennis that we set out to play. At the end of the day, that costs you the match. Against programs like this, to try to pull in four singles wins is a tough task.”

Miami, though, would not go away. Fourth-ranked Perez-Somarriba beat a top-10 foe for the second time in as many days, as she defeated sixth-ranked Jones, 6-2, 6-3. The win avenged her prior three-set loss to Jones back on Feb. 20 in Atlanta and moved her career mark against top-10 opponents to 17-5.

The Hurricanes got their second point from Tahan, who posted a scintillating comeback victory. The Tel Mond, Israel, native did not win a single game in the opening set and then took 12 of the final 15 to beat Rosie Garcia Gross, 0-6, 6-2, 6-1.

Just minutes later, Urrutia evened the score at 3-3 by finishing off an impressive 6-4, 6-3 triumph against Lee.

All eyes then turned to Court 5, where Khodan forced a split against Mahak Jain, but trailed, 0-2, in the finale. The Ivano-Frankivsk, Ukraine, native dropped deuce points in each of the next two games and eventually fell behind, 0-5. She won the next game, but could not claw back any further, as Jain sealed the match with a 6-3, 3-6, 6-1 result.

For Miami, Saturday marked the fifth time—in eight losses—it has dropped a 4-3 decision to a top-16 team. Each of its last four defeats, dating back to March 7, are included on that list and it has five such setbacks on the year as a whole.

“I’m happy with the fight; I’m not so happy with the execution. But at the end of the day, listen, I’m proud of this team,” Yaroshuk-Tews said. “We’ve come a long way; we’re playing great tennis. We’ve got an NCAA tournament ahead of us. I tell these kids all the time, the conference [tournament] is bigger than the regular season and NCAAs is bigger than conference. So, we’ve just got to keep our foot on the gas and we’ve got to make a few minor adjustments, keep our heads up, get back to Miami and practice.”

The Hurricanes now await their destination for the NCAA Team Championship, as they are set to make their 25th straight appearance in the field. Competition is scheduled to begin the weekend of May 7-9 at 16 host sites across the country.