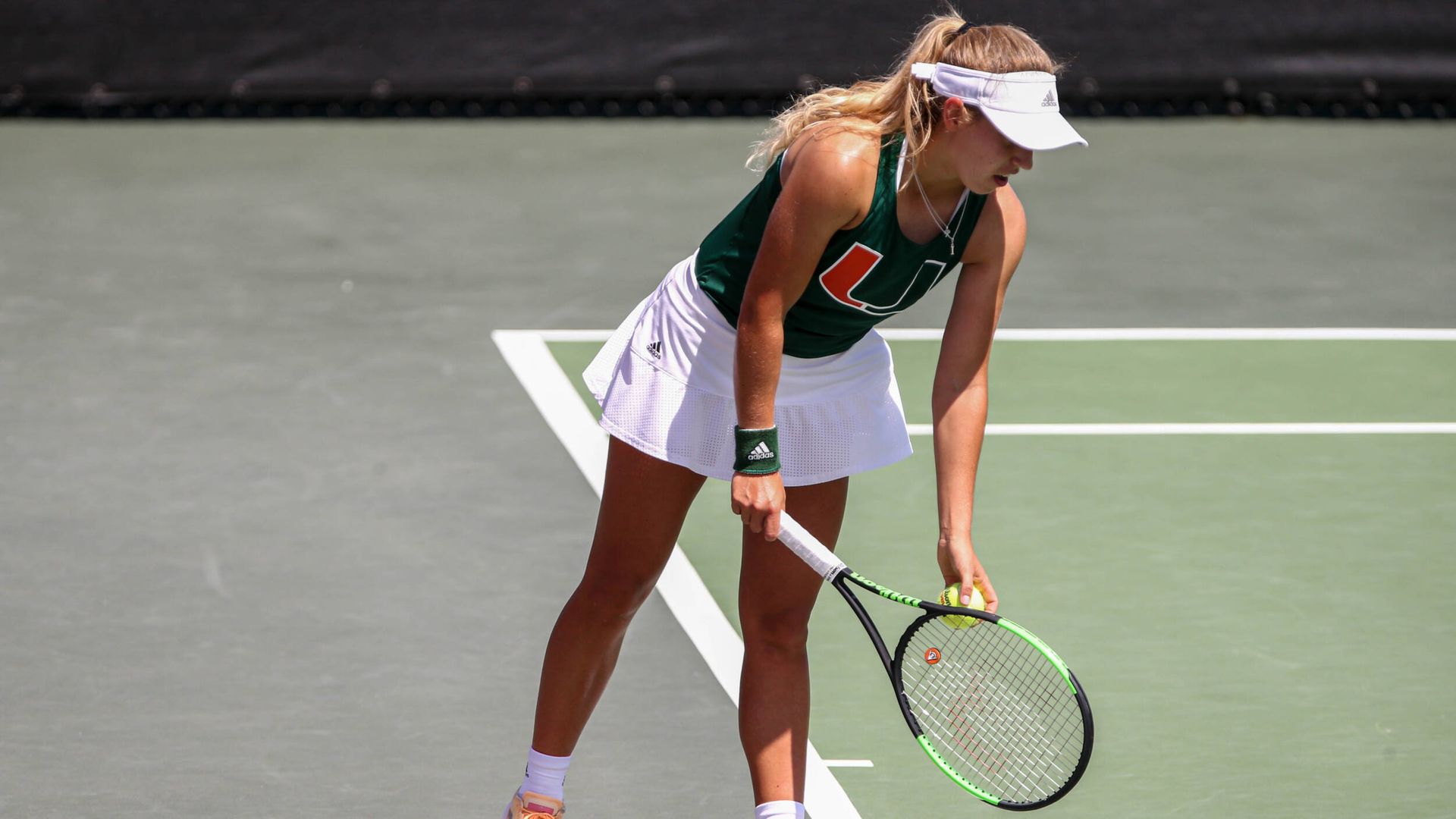 TALLAHASSEE, Fla. – The University of Miami women’s tennis team came up one point shy of a top-five road win over its archrival, No. 4/5 Florida State, Friday night inside the Scott Speicher Memorial Tennis Center.

Second-year freshman Florencia Urrutia had seven overall match points for No. 22/20 Miami (11-7, 8-5 ACC) in the decisive singles contest on Court 4, but Petra Hule fought off all of them and won a third-set tiebreaker to give the Seminoles the victory.

“I’m proud of this team. We put ourselves in a position to take down a top-five program and we simply didn’t execute,” Miami head coach Paige Yaroshuk-Tews said. “That’s sports; it’s a process that doesn’t just happen overnight. Sometimes you need to feel this pain to make change as a program and get the bigger one down the road. We have come so far, but still need to push. Each day you learn, each match you grow.”

Florida State (16-3, 11-2 ACC) raced out to a three-game lead on all three courts in doubles play and staved off comeback bids in each match to win them all.

In the played-out remaining match, a top-20 affair, the Seminoles’ No. 12-ranked tandem of Nandini Das and Andrea Garcia edged the Hurricanes’ No. 20-ranked duo pair of second-year freshmen Diana Khodan and Maya Tahan.

Miami evened the score by taking the first singles decision, an impressive 6-2, 6-2 victory from Tahan against Garcia. Moments later, however, the Seminoles went back in front, 2-1, as Allen snapped Khodan’s nine-match winning streak with a 6-4, 6-1 victory.

Just seconds after Miami tied the score, Florida State surged back in front, as Das finished off a 6-2, 6-4 victory against Achong.

The Hurricanes, however, pulled even for a third time just minutes later, as fourth-ranked Perez-Somarriba earned a win in a top-10 showdown. The Madrid, who bagged her fourth top-15 win in the past five matches, native improved to 15-5 in her career against top-10 foes by downing eighth-ranked Pairone, 6-4, 6-3.

All eyes then turned to Court 4, where Hule, after losing a first-set tiebreaker to Urrutia, was one game away from forcing a split and did just that on her first opportunity.

After dropping two of the first three games in the final set, Urrutia won four in a row to take a 5-2 lead. Hule staved off two match points in the eighth game and then three more in the ninth game, before pulling level at 5-5.

“Flor came up big for us last weekend and a little short tonight,” Yaroshuk-Tews said. “The match loss is on all of us, not just her. Again, I’m proud to be coaching this team right now.”

Four of the Hurricanes’ last five losses, including each of the past three, have come by a 4-3 margin against a top-12 team. Three of those outings were on the road for Miami, which played away from home Friday for the first time since March 14.

Miami, which has faced a top-11 team in three of its past four contests, dropped to still-excellent 35-9 in its all-time series against Florida State with Friday’s defeat.

The Hurricanes will conclude the 2021 regular season next Friday at 2 p.m. against Florida Atlantic at the Neil Schiff Tennis Center in Coral Gables, Fla. Perez-Somarriba will be recognized during Senior Day ceremonies before the match.