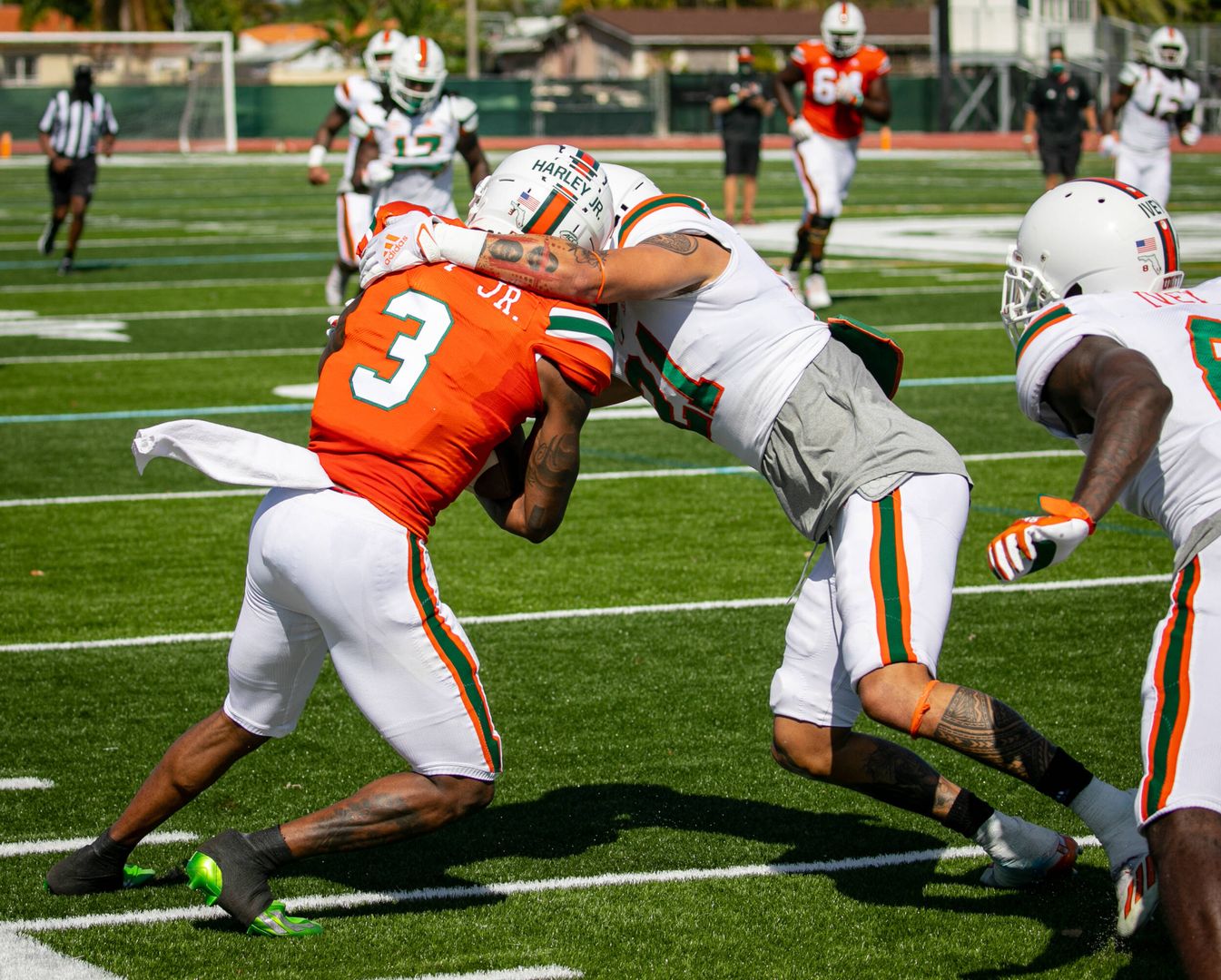 CORAL GABLES, Fla. – Before the Hurricanes took the field for their first scrimmage of the spring, head coach Manny Diaz stressed one of the things he wanted to see Saturday was how some of Miami’s youngest players responded in their first big on-field test.

Those youngsters gave him plenty to get excited about on Saturday morning.

With quarterback D’Eriq King on the sideline helping signal in plays as he continues recovering from a knee injury sustained in Miami’s final game of the season, freshmen Tyler Van Dyke and Jake Garcia were tasked with leading the offense. Each delivered a handful of big plays.

Defensively, freshman Chase Smith made his presence known, as did freshman Avantae Williams, who returned to action earlier this month after sitting out last season.

The morning was, Diaz noted, a productive one as the Hurricanes now prepare to head into the second half of spring drills.

“We want to keep things simple in scrimmage one. There wasn’t a lot of scheme [and] going against each other. It was about blocking, getting off blocks, tackling, breaking tackles, catching, disrupting,” Diaz said. “So we’ll advance now into some more situational stuff as we get into the second part of spring practice. What I liked to see today, though, was that the team played hard. I thought they played for each other and you want to see the identity of an offense and a defense start to grow on these Saturdays and I thought we did a good job of that.”

Here, some takeaways from Miami’s first scrimmage of the spring. 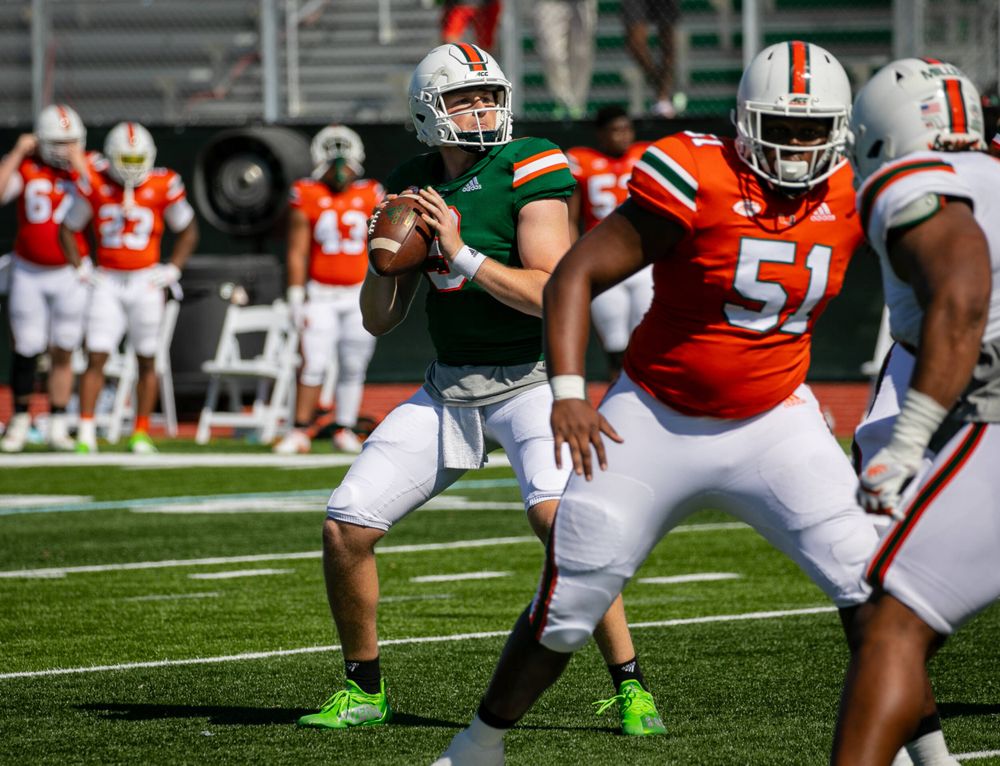 Last fall, King – a redshirt senior – established himself as one of Miami’s unquestioned leaders on and off the field. Saturday, he served as an assistant coach of sorts and two of his youngest pupils did their best to keep the offense humming.

Van Dyke, who appeared in two games for the Hurricanes last year, completed 10 of 15 passes for 114 yards with a touchdown. Garcia, meanwhile, was 15 of 19 for 188 yards and a touchdown – a solid performance, especially given the freshman was limited during some of Miami’s first practices while recovering from a minor foot injury.

“I think it was exciting. Talk about young guys, let’s talk about quarterbacks first,” Diaz said after the scrimmage. “I thought both Tyler and Jake did a good job. They moved the ball well when they were in there…They both made really nice throws, so it’ll be fun to continue to watch those guy battle it out.”

2. A veteran and a young receiver shine

One of the biggest plays of Saturday’s scrimmage came from one of Miami’s veterans, receiver Mike Harley, who, on 3rd-and-18, caught a long touchdown pass on one of the scrimmage’s opening drives. 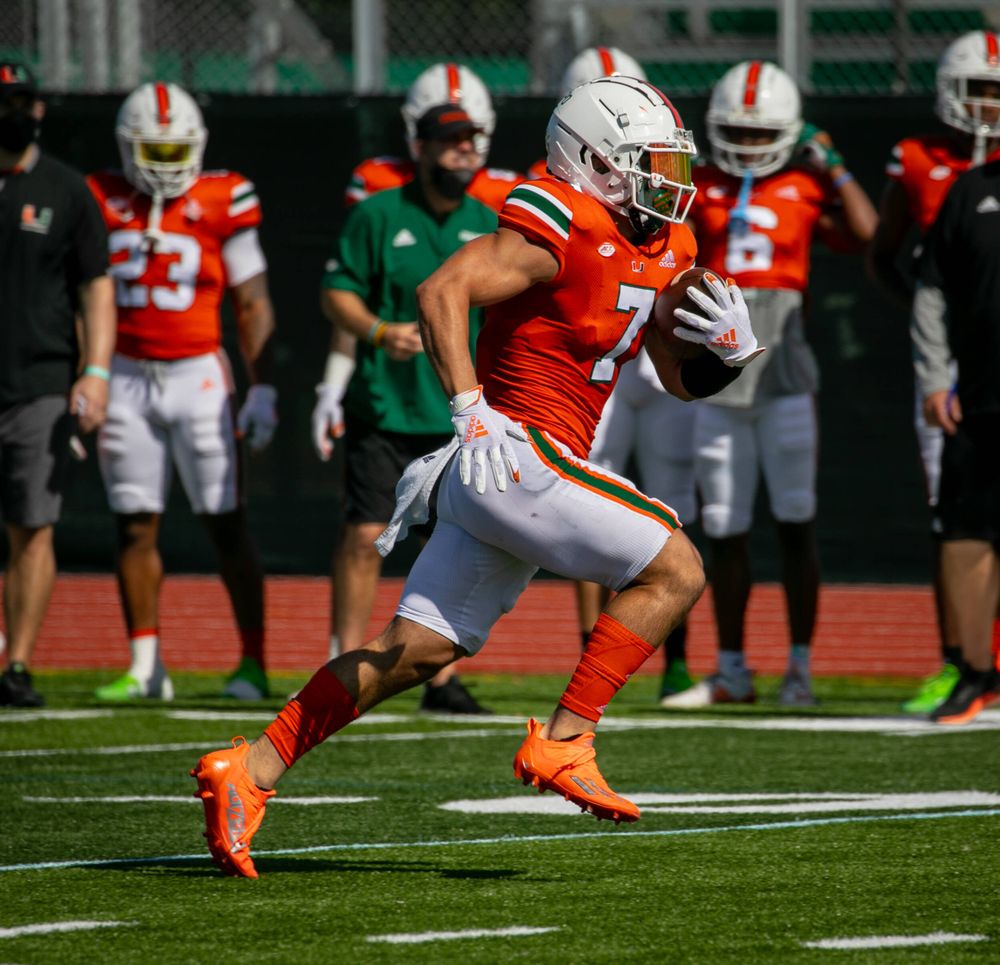 Harley, who led the Hurricanes with 799 receiving yards last fall, finished a short day with two catches for 75 yards. Freshman receiver Xavier Restrepo emerged as one of the most consistent players Saturday, finishing with nine catches for 144 yards and two touchdowns.

“Mike, we didn’t want to give too much work to. We know what he can do…and he just looked like he was picking up right where he left off a year ago on an explosive play,” Diaz said. “Restrepo…he’s willing himself into becoming a guy. He’s got such great competitive spirit and those were not easy yards. He was making tough catches and run-after-catches and breaking tackles.”

One of the position groups that will be under plenty of scrutiny next season is Miami’s young linebackers corps. On Saturday, several of those linebackers showed their ability to make plays.

Smith, one of Miami’s early enrollees, had a team-high five tackles and notched both a sack and an interception. Deshawn Troutman had four tackles, while Corey Flagg and Avery Huff notched a tackle each and earned praise from their coach.

“Corey Flagg is really continuing to make strides and the guy that is slowly getting better and better is Avery Huff,” said Diaz, who will be calling plays for Miami’s defense this season. “He made a nice play on a screen and just seeing the game better. Beyond that, Chase Smith had an interception today. How cool for him. He’s doing a really nice job of acclimating to college football.”

4. The secondary made plays

Expectations were high last year when Williams – one of the nation’s top-rated safeties – arrived in Coral Gables. But a medical issue sidelined him for the season before he was cleared to return to action earlier this month. 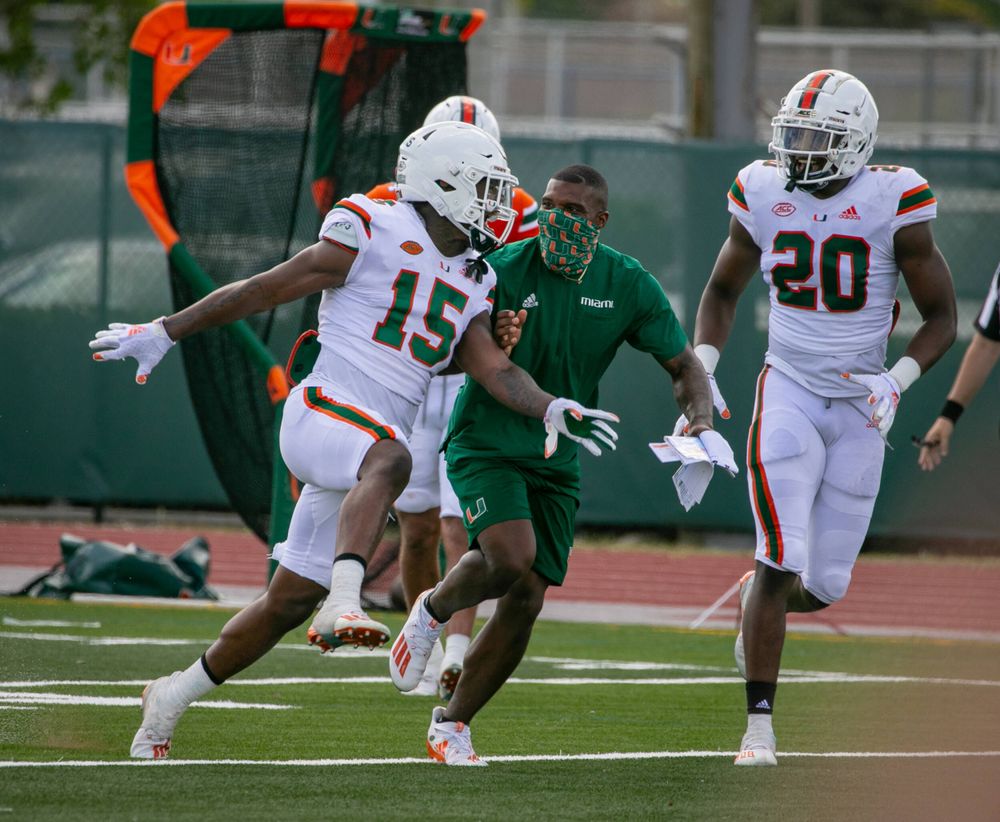 On Saturday, his first official scrimmage as a Hurricane, Williams had an interception and a pair of tackles. He wasn’t the only member of the secondary to produce.

Veterans safeties Amari Carter and Bubba Bolden each had a pair of tackles, while cornerback DJ Ivey had a tackle. Tyrique Stevenson, who transferred to Miami earlier this year, also had a tackle and broke up a pass in his first scrimmage as a Hurricane.

“Just leveraging the football, not giving up explosive plays, I think we were solid on that,” Diaz said. “You could see the addition Tyrique Stevenson has made to our defense, standing out not just in pass coverage, but in run support and making good tackles. There’s always going to be good and bad with every position group in a scrimmage, but I was pleased with how [the secondary] played.”

5. Another Borregales dons orange and green

Jose Borregales made history for the Hurricanes last December, becoming the program’s first Lou Groza Award winner after a season in which he converted on 20 of 22 field goals.

Three months after he was recognized as college football’s top kicker, another Borregales is putting balls through the uprights for Miami.

Andres Borregales – Jose’s younger brother – converted on two field goal attempts on Saturday, including a 42-yarder that came on the scrimmage’s final play. 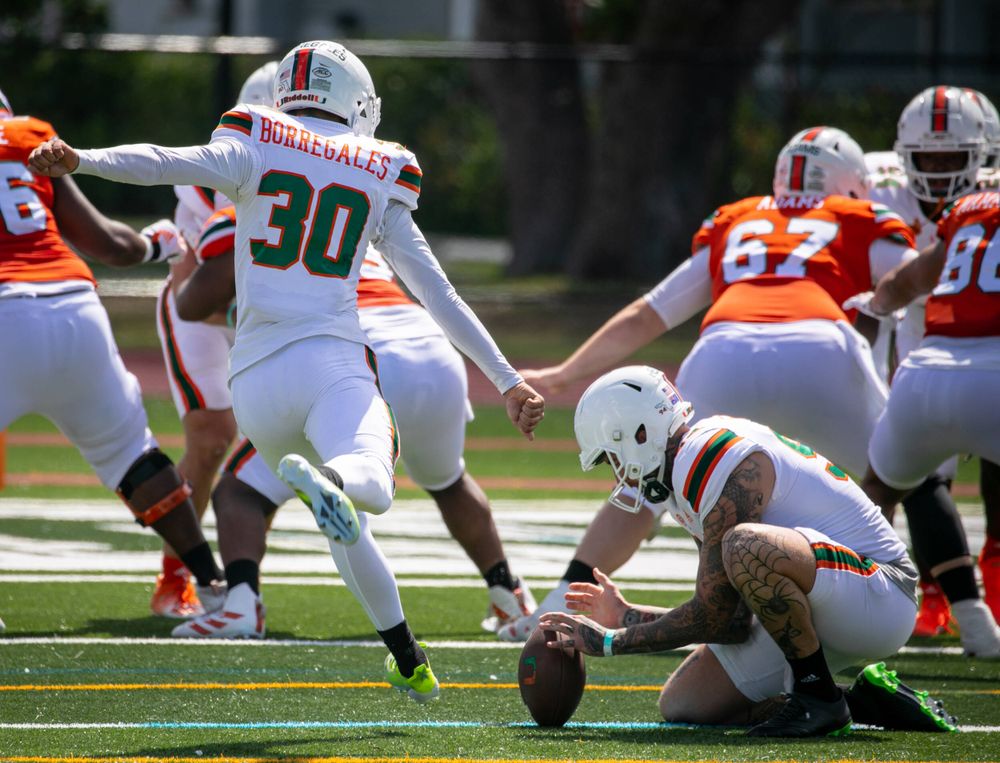 His performance was one of the highlights as competition continues for several special-teams roles across the field.

“We ran three different punt groups through there today and three different kickoff return groups. Obviously, we’re trying to find a punt returner [and] a kickoff returner,” Diaz said. “We have all those jobs open so today is a situation where we can put people around them and make them catch balls under pressure. It was fun to have Andres make about a 42-yarder or whatever it was to close out practice at the end of a 1-minute drill situation.”

The Hurricanes, who finished the 2020 season with an 8-3 record, are scheduled to continue spring drills next week.