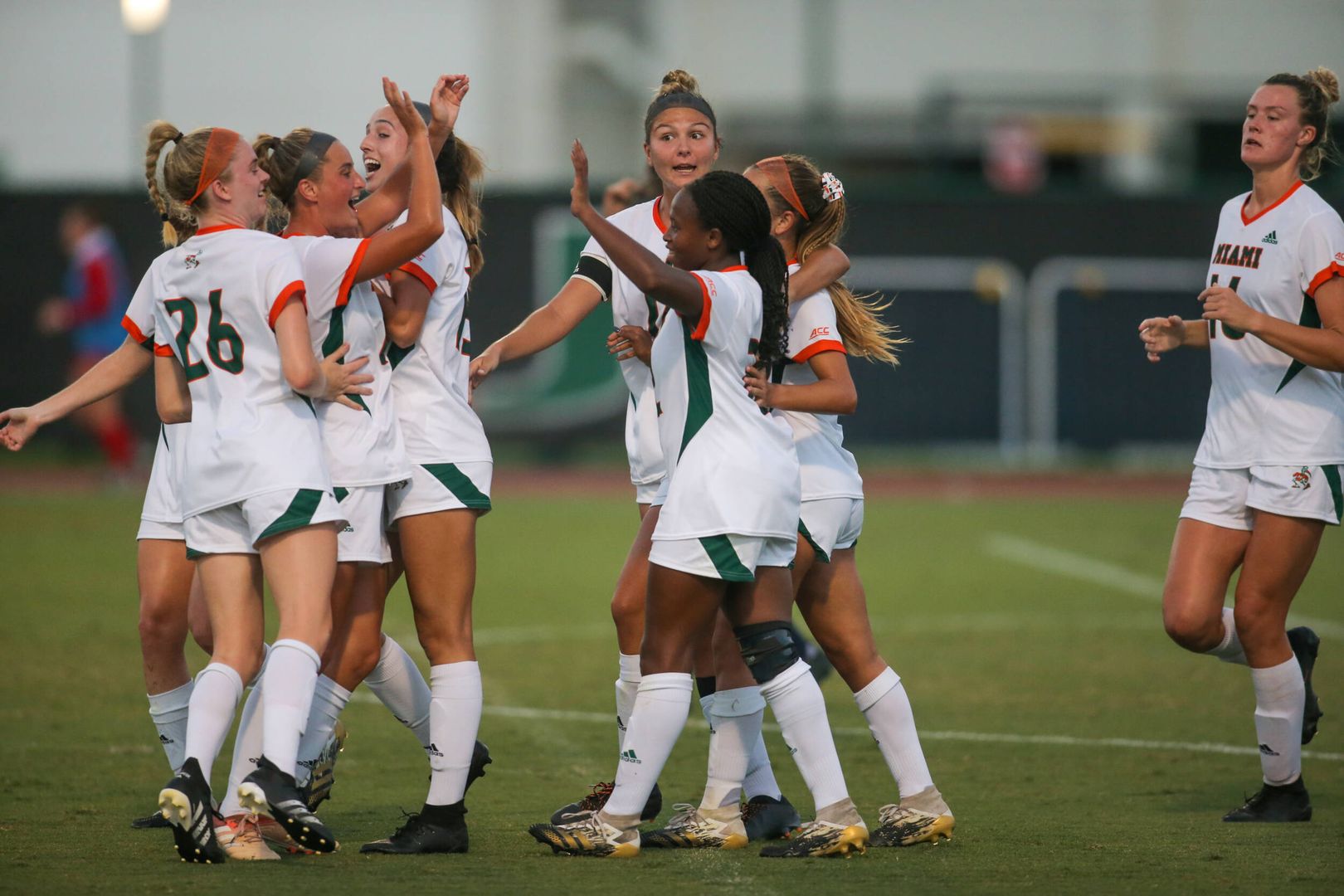 CORAL GABLES, Fla. – An early goal by junior captain Selena Fortich got momentum swinging in the University of Miami soccer team’s direction, as the Hurricanes never let off of the gas to open the spring home season in dominant fashion.

Securing its first win of the year, Miami shut out FIU, 4-0, Sunday night at Cobb Stadium.

“They are definitely excited. I think we have been really grinding and had a lot of setbacks and disappointments this season. So, to be able to score a bunch of goals and feel like all the work we have been putting in is getting a result, I think that was truly important,” Miami head coach Sarah Barnes said. “As a staff, we feel like we didn’t play as well as we would have like to tonight, so we know that there is still a lot more that we need to do in order to be competitive against Florida in a month. But, I do think you need to celebrate the small victories when you are building and so we are certainly excited about the result.” 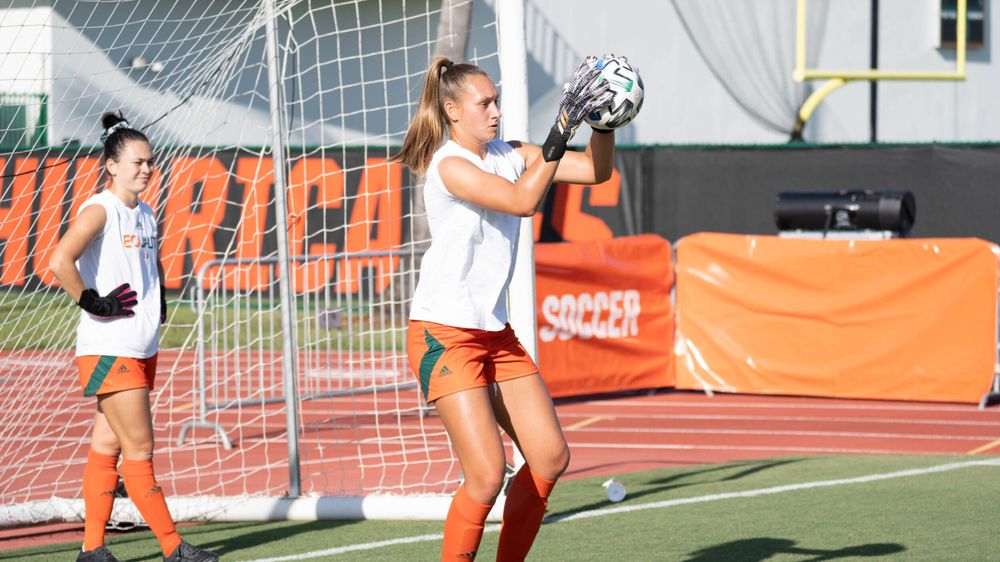 On the offensive end, redshirt freshman midfielder Jackie Koerwitz nearly tallied her third goal of the season, as her header missed just high of the cross bar.

Then, in the 21st minute, freshman forward Katerina Molina sent a pass to the corner flag, where freshman defender Gabriela Rusek sent a cross toward the back post.

On the receiving end, Fortich headed home her first goal of the season to give Miami the early 1-0 lead.

“Honestly, I didn’t even realize it went in at first,” Fortich said after the match. “I was just trying to redirect it back across to our two players [in the box], but it ended up going in. So, I was really excited about that, especially with coming back [after missing the first couple spring matches] it was a great step forward to see that my practicing has paid off with everything we have been doing.

“I think it definitely is a great confidence builder for everyone because it shows that multiple players can score, we don’t have just one person that we need to find to get [the ball] in the back of the net,” Fortich continued. “Everyone is willing to put their body on the line, everyone is willing to dive, score a goal and go 1v1 with the keeper. So, moving forward it is important to see that everyone can score and if we get in the right positions, we have a great chance to get the ball into the back of the net.” 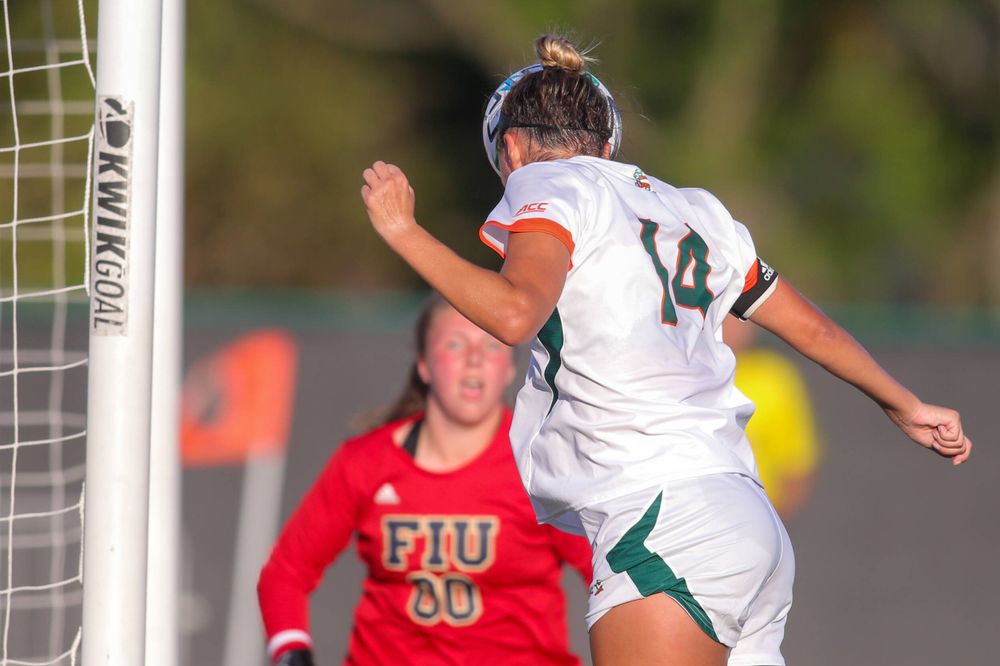 In the 42nd minute, Miami doubled its lead when freshman Ena Taslidza sent a long ball down the far sideline toward freshman midfielder Michaela Baker who found Maria Jakobsdottir crashing toward the net, which the sophomore midfielder snuck past the keeper for the tally.

Out of the locker room, it did not take long for the Hurricanes to add to their lead, when Dagenais sent a goal kick toward Jakobsdottir who flipped the ball in space to redshirt sophomore forward Gudrun Haralz in the 57th minute.

The team’s leading scorer as a freshman, before missing all of the 2019-20 campaign due to a leg injury, the Kópavogur, Iceland, native slid the ball past the FIU goalkeeper to log her eighth career goal.

Off a free kick in the 64th minute, the Canes notched their fourth and final goal of the match when Baker slipped a ball into space for sophomore defender Taylor Shell, the freshman’s second assist of the match.

After receiving the ball at the corner of the six-yard box, Shell sent a laser that bounced off a pair of posts before hitting the goals back pocket.

“Being able to score goals and having the confidence to know that you can score goals [is so important]. Sometimes, when it bounces out, it feels like there is saran wrap on the goal, which is certainly frustrating and knocks your confidence a little bit,” Barnes said about the four goal night. “So, from a confidence building stand point, that was critical. Both for us long term and for the game tonight. To be able to put one away early, it makes you feel confident, makes you feel like you are in control. You feel more comfortable in the game with that lead. And I feel like the team did a nice job of continuing to build off that and not take their foot off the gas.”

Efficient on the attack, Miami capped the game scoring on all but one of its shots on target, as the Panthers led in the category, 6-5.

Up next, the Hurricanes will close out the 2020-21 season at home when they play host to the Florida Gators on April 3 at noon.