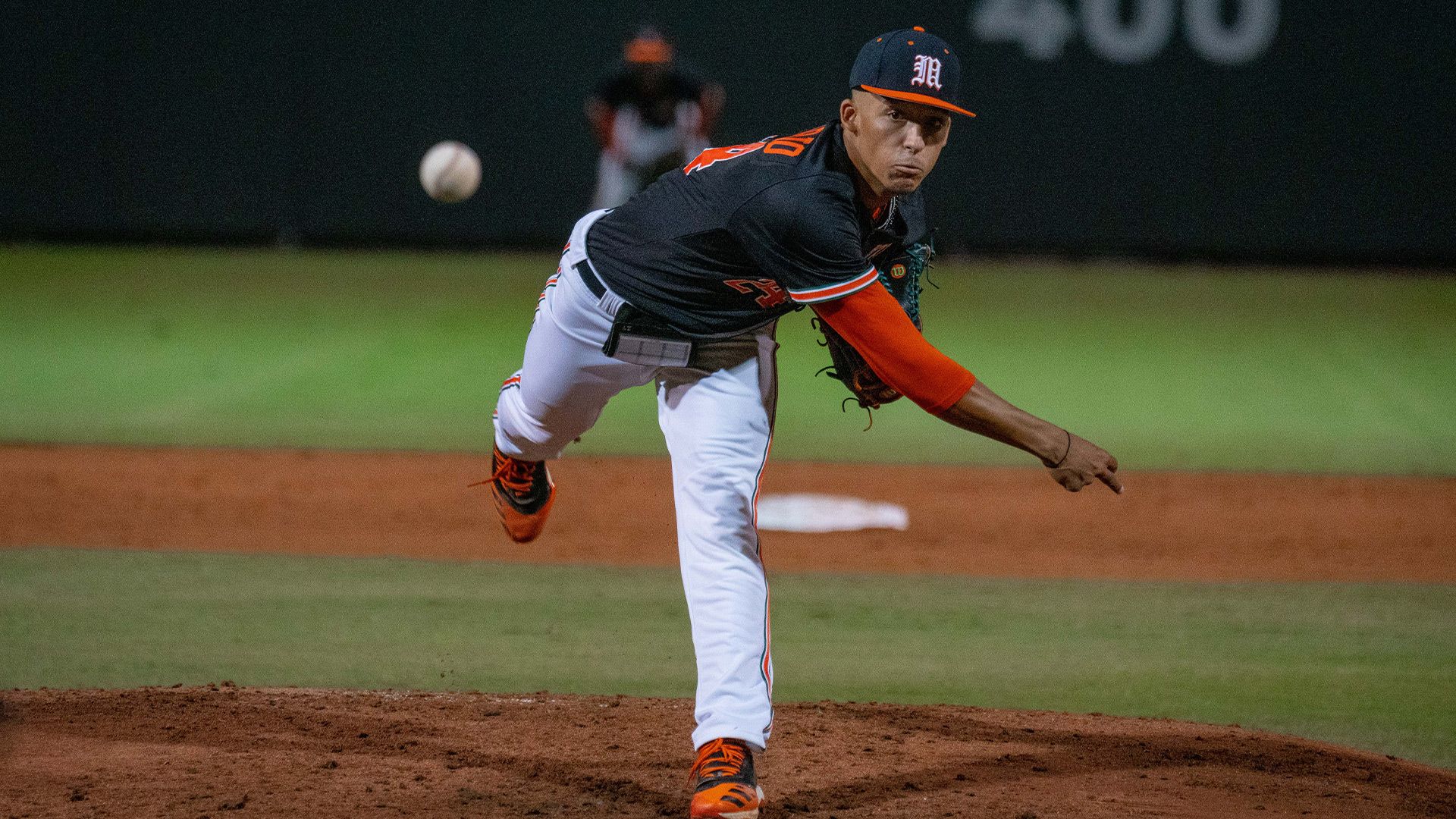 Rosario Dominates in 3-0 Win over Hokies

CORAL GABLES, Fla. – For Alejandro Rosario, Saturday night was a home debut he would never forget.

The 6-foot right-hander was brilliant in his first start at Mark Light Field, tossing seven shutout innings to help No. 3 Miami even the series against Virginia Tech with a 3-0 victory before a sold-out crowd of 652 fans.

“I felt completely comfortable,” Rosario said of his first start on Miami’s mound. “I felt like I’ve been doing this for a while, and I just went out there and competed.”

For the second straight night, the Miami offense got right to work in the opening inning. After a Yohandy Morales RBI single to center, Adam Frank recorded his first hit as a Hurricane and it was a big one. The third baseman, who was making his first start at The U, came through with a two-run single up the middle that made it 3-0 in favor of the Canes.

“It definitely felt good,” Frank said of his first career hit. “This team is very good. So, I was lucky to be able to start today. I was waiting for my opportunity, came up in a big situation and I’m glad I was able to get the job done.”

That was all the offense Rosario needed, as the true freshman was dominant in his Mark Light Stadium debut. The right-hander allowed no runs and scattered three hits while striking out a career-high seven batters over a career-long seven innings, earning his first collegiate win.

“The ball was just jumping out of his hand, very explosive,” head coach Gino DiMare said. “We knew we had something special when we landed on campus. Now it’s just polishing him and developing the off-speed and learning how to locate, learning how to pitch, which [pitching coach] J.D. [Arteaga] does a great job with. He should be a guy in three years that’s going to be one of the top players in the country.”

Frank was impressed with the young pitcher’s poise on the mound in his first start on the Hurricanes’ home field.

“He is just electric,” Frank said. “Seeing him throw from third base, electric. The umpire asked if his 97-98 was legit I said, ‘Yeah, he does that every single day.’ I’m 22 years old and it’s amazing to see such a young guy with such confidence on the mound in his second start and the stuff he has, it’s unbelievable; it’s awesome to watch.”

Rosario, who showed resilience a week ago in his collegiate debut at Florida, allowed just two Hokies to reach base over his first six innings of work. But Virginia Tech got two runners on with two outs in the seventh, prompting a visit from Arteaga that helped him refocus and finish the inning.

“Anytime you face adversity, you always want to come out on top,” Rosario said. “I feel like it makes you a better player. He just came out and said, ‘Relax, you’re in control and make a pitch,’ and that’s what I did.”

Graduate transfer Ben Wanger also made his debut at The Light on Saturday, following Rosario on the mound and striking out a batter in a scoreless eighth. Carson Palmquist shut the door in the ninth, earning his second save of the year and helping Miami even the series against the visiting Hokies.

“The pitching set the tone,” DiMare said. “Alejandro was outstanding. I think we got eight out of the nine leadoff guys out during the game. He was pretty dominant. The fastball was explosive. Still a work in progress with the off-speed, but it is getting better and when it does, it’s going to be really amazing. This guy’s just a dominant pitcher. Their coach after the game told me that’s the best pitcher, best arm he’s ever seen since he’s been in the ACC.”

The Hurricanes and Hokies will wrap up their three-game set Sunday afternoon beginning at 1 p.m. Miami freshman Victor Mederos will make his home debut opposite Virginia Tech junior Anthony Simonelli.