Diaz, Defense Ready to Get Back to Basics

CORAL GABLES, Fla. – For Manny Diaz, this was a different sort of National Signing Day.

For most of his career – whether as an assistant coach, a defensive coordinator or now as the head coach at Miami – Diaz has traditionally spent the first Wednesday in February waiting to see how his roster takes shape as prospects across the country formalize their college decisions.

But with the Hurricanes signing a top-15 recruiting class during December’s Early Signing Period and a few high-profile graduate transfers joining the program in January, there were no faxes to anticipate and no roster announcements to make on this signing day.

Instead, Diaz spent Wednesday outlining his vision for the season ahead and explaining how his defense will look now that it will again be under his control.

Early in the day, the coach shared those thoughts with his players and coaches, including defensive backs coach Travaris Robinson, defensive line coach Jess Simpson, cornerbacks coach DeMarcus Van Dyke, inside linebackers coach Travis Williams and defensive quality control coach Bob Shoop, all of whom have joined the Hurricanes staff in recent weeks.

Later, during a wide-ranging 30-minute news conference with reporters, Diaz detailed why he felt it was time for him to resume calling plays for Miami’s defense and explained why he thinks now is the right time for that to happen. 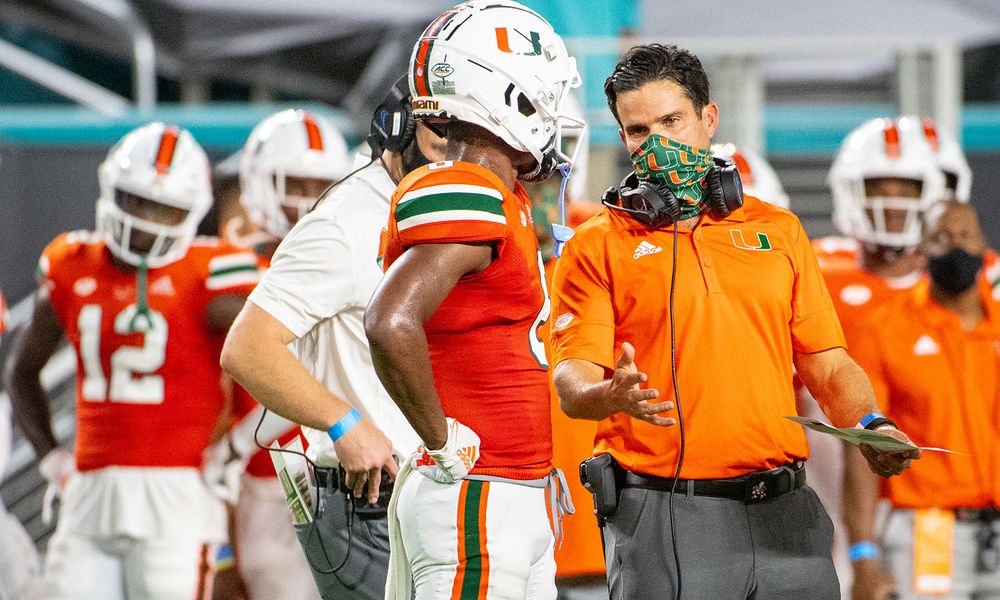 There’s no doubt what Diaz did as Miami’s defensive coordinator from 2016-2018 made a difference.

In his first season with the Hurricanes, Miami was ranked No. 20 nationally in total defense, an improvement from being ranked 69th in 2015. The Hurricanes were ranked ninth in yards per play (4.75), an improvement from 86th a year earlier. They were also fifth in the nation in tackles for loss after being 105th in 2015 and eighth in defensive touchdowns allowed, after being 61st the previous season.

The Hurricanes did all of that as the only team in the nation to start three true freshmen in Shaq Quarterman, Mike Pinckney and Zach McCloud.

Miami also finished fifth nationally in turnover margin and made national headlines that season thanks in part to a particular piece of jewelry – the Turnover Chain, which made its debut in 2017 after Diaz wanted to ensure creating turnovers became a priority for his defense.

Though the Hurricanes posted a 7-6 record in 2018, Diaz’s defense again posted impressive numbers, finishing tops in the nation in several categories including tackles for loss, third-down conversion percentage and passing yards allowed.

The coach’s aggressive scheme appealed to players and fans alike and when he was named Miami’s head coach after the retirement of former coach Mark Richt in 2018, the expectation was the Hurricanes would continue to be a defensive force with Diaz in charge.

Though there have been solid performances in the years since, consistency has sometimes been an issue – a fact highlighted last fall after Miami allowed 778 yards and 62 points in a loss to North Carolina a week after notching its first ACC shutout in a 48-0 win over Duke.

For Diaz, that wasn’t good enough. Changes, he knew, had to be made.

Among the biggest? A revamped staff that now features three former defensive coordinators in Robinson, Shoop and Todd Stroud, who has moved into a new role as a senior football adviser.

Because of that – and the fact he will be coaching an experienced team this season – Diaz believes he can succeed as Miami’s defensive playcaller, even with all of his responsibilities as a head coach.

"The whole program is my responsibility … I’m accountable for it and I’m going to fix it.”

“We’ve got a team that knows me very well, so there’s not a concern of an offensive-defensive divide … With a guy like [offensive coordinator] Rhett Lashlee, who certainly has done a great job with our offense, not just schematically, but handling that side of the ball and leading them, our offensive leadership with [quarterback] D’Eriq [King] and so many of the players that have come back … we have a team that understands,” Diaz said. “The key move for me is Todd Stroud as basically a senior assistant. His expertise in being able to handle some of the administrative things and make sure the program is up and running well … I feel like after two years, we’ve got a lot of the infrastructure on the inside in place and built.

The newest coaches on his staff say they’re ready to help make that happen.

Robinson, a veteran coach widely regarded as one of the nation’s top recruiters, mulled several coaching opportunities this offseason, but said he was drawn to Diaz’s scheme and Miami’s ability to win big sooner rather than later. And Simpson, who served as the Hurricanes’ defensive line coach in 2018, returned knowing first-hand how successful Diaz’s defense could be.

“Manny’s here because of the job he did as the defensive coordinator at the University of Miami. This is his town, this is his people, this is his place. Manny is just a really, really smart guy. He’s got great people skills and people love and respect and trust him. He’s just true to him,” Simpson said. “And that’s the fun part about it when you’re working with guys who know who they are and they know what they want to do, they know the people they want to surround themselves with, they know the direction of the program and you know where you’re going. I think that’s what gives you a chance to be successful.”

That success, both on the defense and as a whole, is what Diaz hopes the Hurricanes find this year. Their 8-3 mark last fall was an improvement from a tough 2019 season.

Now it’s time to continue building – with the head coach ready to take on an even bigger role.

“It definitely has me excited, has me fired up and I’m excited to work with this staff,” Diaz said. “We’ve got some outstanding teachers, some outstanding men and I think it’s great for our players. I think we’ll have great growth. I think it’ll be good for everybody to get out of their comfort zone. We’ve got some great experience on the staff and I’m really excited to work with them and get back to playing defense the way we ought to be playing defense at the University of Miami.”