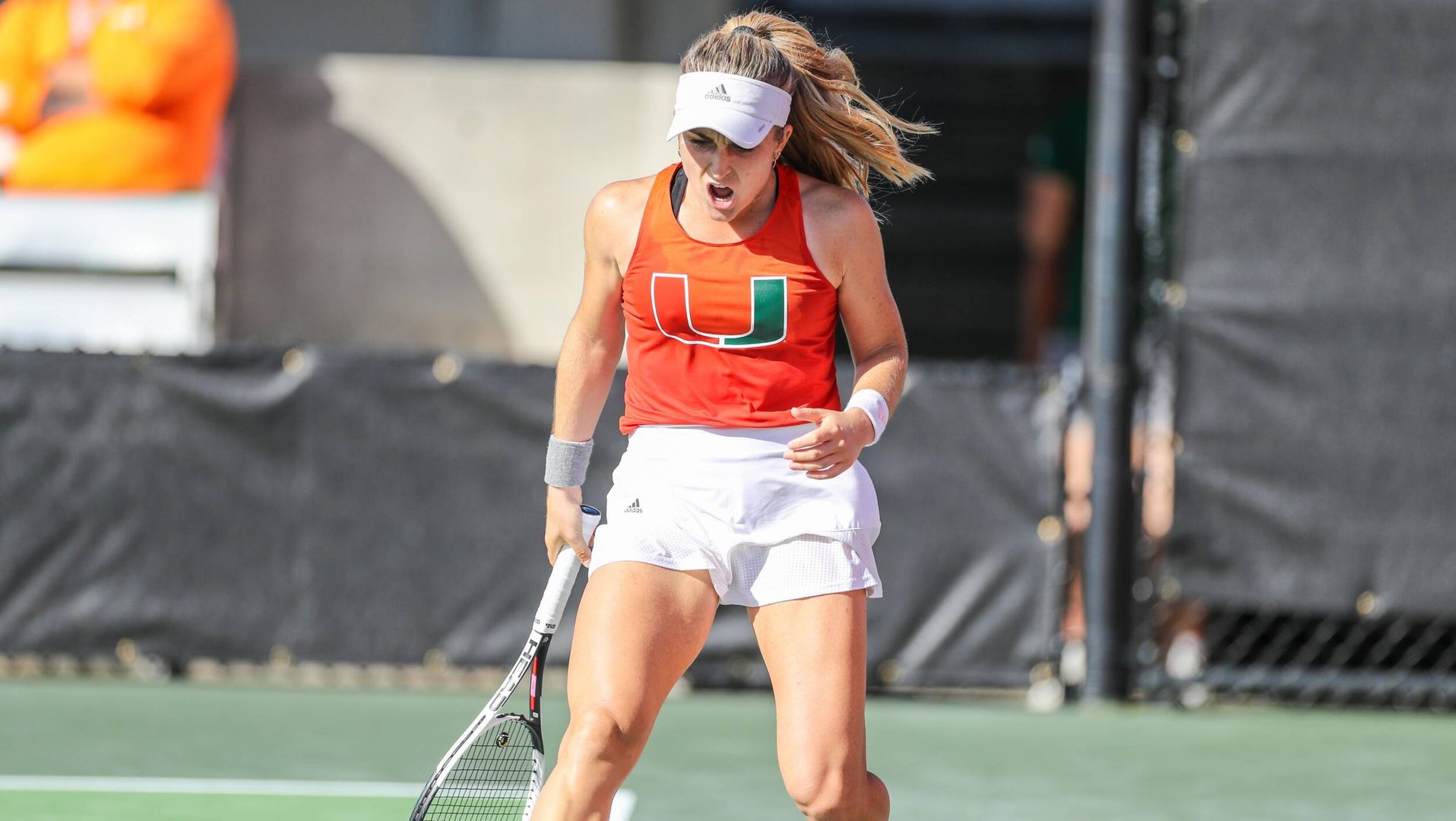 Miami (2-0) took the doubles point inside the Currey Tennis Center and then rallied back from a 2-1 deficit to post its first top-25 victory of the season, with redshirt senior Estela Perez-Somarriba clinching it in a third-set tiebreaker.

“This was a heck of an effort from our squad today,” Miami head coach Paige Yaroshuk-Tews said. “We were facing some tough doubles pairs and a team coming off some big indoor matches with a little more experience. We played aggressive and hung in there in tough moments. I’m proud of their effort.”

The Hurricanes earned the first doubles decision behind a 6-3 victory from sophomore Daevenia Achong, in her season debut, and freshman Isabella Pfennig over Tiphanie Fiquet and Kelsey Mize.

Ole Miss (1-2) stormed back from a 0-4 deficit on Court 1 to take a 5-4 lead and also pulled even at 5-5 on Court 2, but Miami won out in both matches. First, sophomores Diana Khodan and Maya Tahan defeated No. 44 Tereza Janatova and Anna Vrbenska, 7-5, to clinch the opening point.

In the played-out final match, Perez-Somarriba and sophomore Florencia Urrutia fought back and registered a top-25 victory by knocking off No. 24 Alexa Bortles and Sabina Machalova 7-5.

For both Khodan and Urrutia, the victories were their first as collegians over ranked foes, in either singles or doubles, while Tahan’s was her second.

The Rebels took the first two singles matches by knocking off a pair of ranked Hurricanes. First, Vrbenska posted a 6-1, 6-3 decision against sophomore Selma Cadar, ranked No. 102, and then Fiquet defeated No. 87 Achong, 6-2, 6-2.

Urrutia tallied the next point, leveling the score at two apiece by downing Bortles, 7-5, 6-3, but Ole Miss countered right back.

Just moments later, Pfennig, whose match did not start until a court became available, completed a decisive 6-2, 6-1 triumph over Elysia Pool, tying the match at three.

All eyes then turned to a top-40 showdown on Court 1, where second-ranked Perez-Somarriba and No. 39 Machalova were even at four apiece.

Perez-Somarriba improved to 45-10 against top-50 foes with the victory and logged her 143rd total singles win, passing Duke’s Reka Zsilinszka for sole possession for fifth place in ACC history.

By the time Machalova’s final ball sailed long, it was over four hours and 20 minutes from the first serve of the day.

Miami faces a quick turnaround before its next match, which is set for Saturday at 11:30 a.m. ET against No. 15 Vanderbilt, also in Nashville.