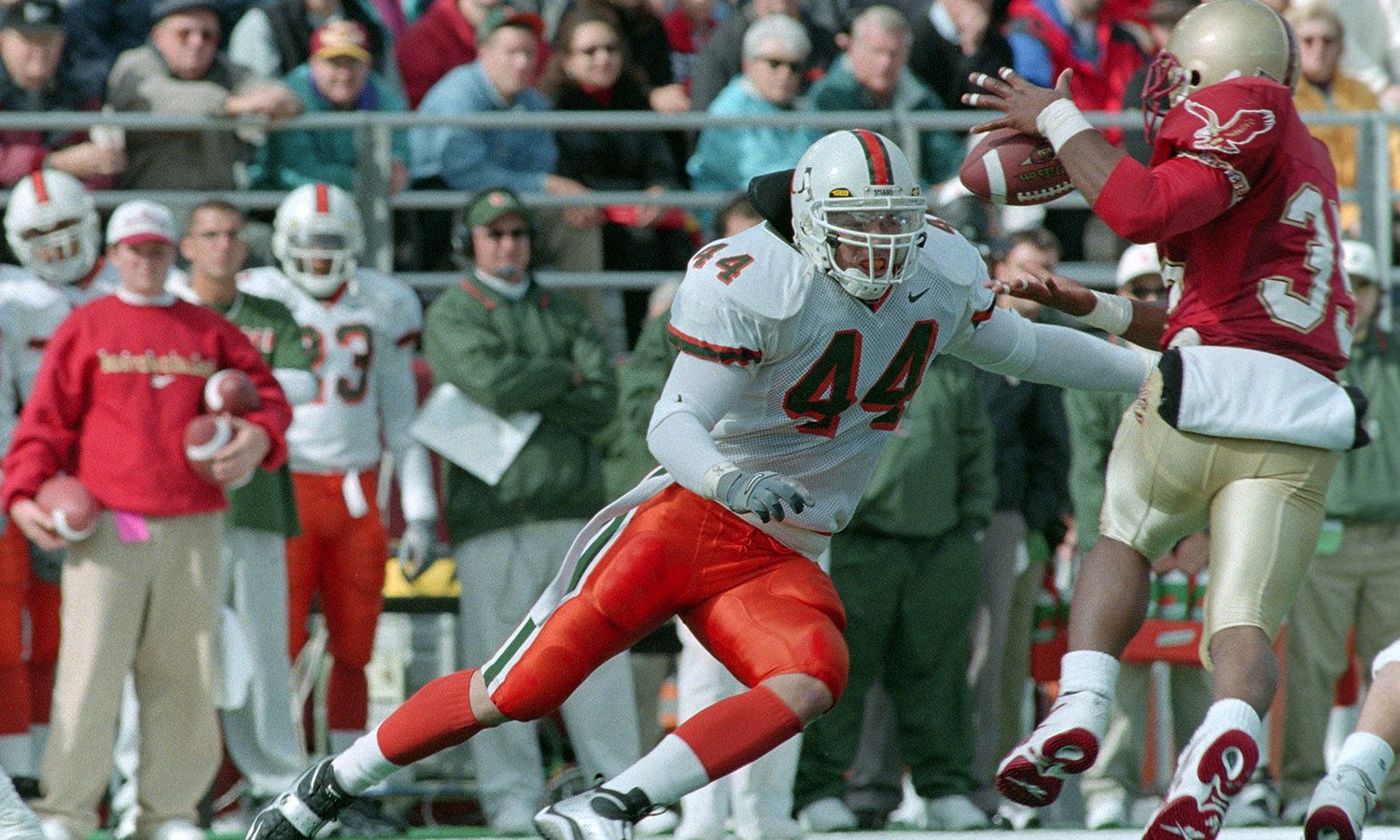 The first phone calls, of course, were to his family.

His parents, who had nurtured him and were such a part of his journey. His wife, who knew exactly what his time at Miami had meant to him. His 13-year-old son Brady, a budding linebacker with big football dreams of his own.

For Dan Morgan, sharing the news that he’d finally been selected for induction into the College Football Hall of Fame was emotional and special. But it was the conversation he had with Brady that was especially memorable.

“I thought that was a pretty cool moment,” Morgan said. “I know he’s enjoying it. He was just like, ‘Wow! That’s awesome.’ I think he knows, but he doesn’t really know [what this means]. But I know and it was just cool to be able to tell him that I made it.”

Maybe. But there’s no doubt Morgan’s pending induction into the College Football Hall of Fame puts him in some very exclusive company.

According to the Hall, only 0.02 percent of college football players and coaches can claim the same honor. Of the 78 FBS players on this year’s ballot, Morgan was one of 11 first-team All-Americans to make the cut.

Former Hurricanes coaches Dennis Erickson, Andy Gustafson, Jack Harding and Jimmy Johnson are also enshrined and for Morgan – who is now the director of player personnel for the Buffalo Bills – having his name linked to those Miami greats is the stuff of dreams.

“I wanted to play at Miami ever since I was a little kid. To be able to go there and play linebacker there – there’s so many great linebackers that have come through there,” Morgan said. “I just wanted to live up to their expectations and be the best that I could be. It all worked out well and I’m just proud I could represent them in the Hall of Fame.”

Morgan – who was recruited out of Broward County’s Taravella High School as a fullback – more than lived up to those expectations once he switched to playing linebacker at Miami.

His 532 career tackles make him the Hurricanes’ all-time leader in that category. He led the team in tackles three of his four years on campus and in 2000, Morgan became the first player in history to sweep college football’s three major defensive awards in a single season when he won the Bednarik, Butkus and Nagurski Awards.

That same season, he was a unanimous First Team All-American and the BIG EAST Defensive Player of the Year. He was a four-year starter at Miami and a three-time captain, becoming the first sophomore in Hurricanes history to earn that distinction.

After his stellar college career, Morgan was drafted 11th by the Carolina Panthers in the 2001 NFL Draft and it was there that he earned All-Rookie team honors and was a 2004 Pro Bowl selection. He made a Super-Bowl record 18 tackles in the Panthers’ 32-29 loss to the Patriots – though coaches in Carolina tabulated that number even higher.

“He was so smart, so instinctive. And obviously, he’s physically gifted. … When I was at Carolina with him, you’d hear him out there, pointing stuff out to other guys, calling out plays. He’s just so cerebral and smart,” said Buffalo Bills general manager Brandon Beane, who was in Carolina’s front office when the Panthers drafted Morgan. “You combine smart with instincts and you’ve got a dangerous player and that’s what Dan was. … You don’t see people as good as Dan Morgan play four years of college football anymore. … For a guy that had his success prior to his senior year, it’s almost amazing when look at it today that he didn’t come out a year earlier. Fortunately for us in Carolina, it worked out that he came out in ’01 and we selected him then.”

After a seven-year career in the NFL that included its share of tough injuries, Morgan moved on to the next part of his career, joining the Seattle Seahawks as a scouting intern.

During that time, he chauffeured players to and from the airport, drove them to physicals, showed them around the Seahawks’ facility and slowly began working his way up the ladder until he became Seattle’s director of pro personnel before the 2015 season.

It was a path Beane couldn’t help but appreciate as he watched from afar.

“There are a lot of players that talk about coaching or scouting when their careers are over and some translate, but very few first rounders,” Beane said. “The unique thing about Dan is, he literally went to Seattle and started at the bottom. … Everything a kid fresh out of college would do, Dan did it all. And he rose to Director of Pro Personnel. … Everything I heard from the people in Seattle was ‘This guy is really good at his job.’

“When we got up here, with a chance to get him out of Seattle, it was really neat, almost like full circle. Watching this young man come to Carolina after being at Miami, he [goes] there as a player and now he’s in one of the top roles in the front office of an NFL team. It’s cool.”

This weekend, Morgan and Beane had two accomplishments to celebrate together.

The first came Friday, when the former linebacker learned of his pending induction into the College Football Hall of Fame. The second came a day later when the Bills notched their first playoff win since 1995.

All of it has been a heady stretch – and Morgan is grateful his time at Miami helped give him both of those memorable moments.

“I think, obviously, going to school down there…it’s a tough school academically. That definitely helped out. All the things I learned from a football standpoint down there, really, is the foundation of who I am now and the player I was in the pros,” said Morgan, who was inducted into the UM Sports Hall of Fame in 2011. “I just learned so much. There’s so much knowledge down there, from players from coaches, you learn a ton at a school like that. It definitely made a big impact on me. … There are so many people there that taught me so much and made me who I am, prepared me for who I am today.” 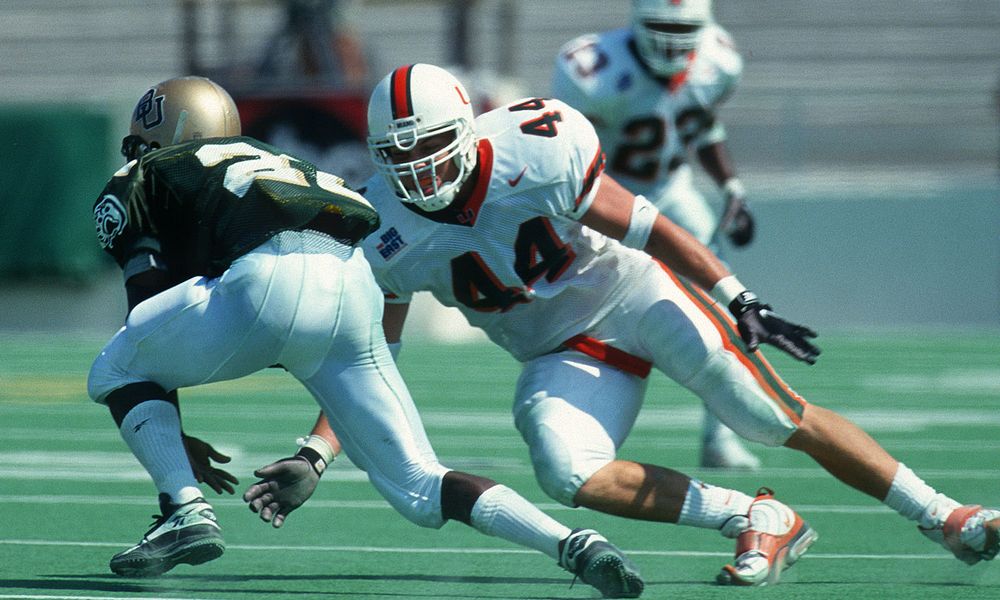